Taiwan announces its first investment in Lithuania, as Lithuania’s exports to Taiwan rose by 30 percent in the first half of 2022 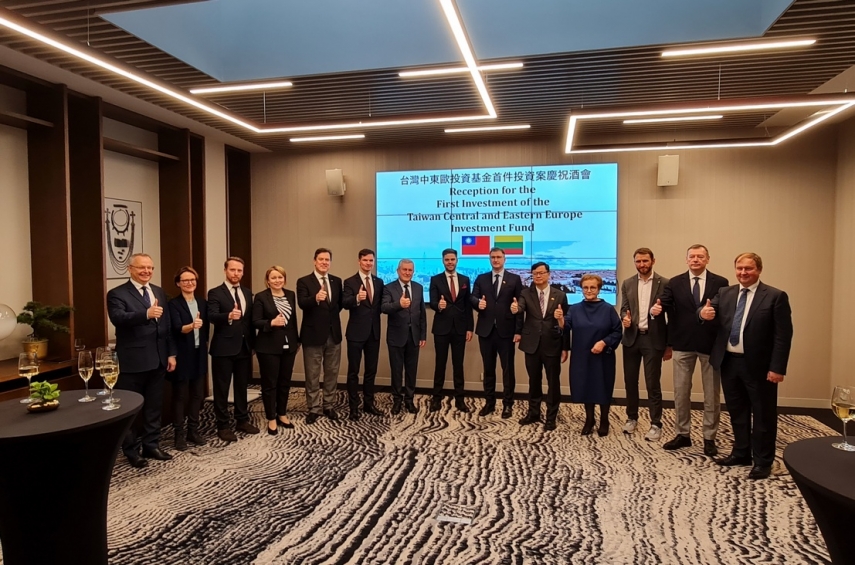 The 200-million USD Taiwan Central and Eastern Europe (CEE) Investment Fund Taiwania has decided to invest 3.5 million euros in Lithuania’s Litilit and become a strategic partner for the firm.

“Taiwan utilized its strong expertise and partnership with technology industries in Taiwan, Asia-Pacific and the US Silicon Valley to help Litilit grow,” Mr. Eric Huang, head of the Taiwanese Representative Office in Lithuania, said in Vilnius on November 7 in the reception to celebrate the first investment of the Fund in Lithuania.

In attendance, there was Ausrine Armonaite, Minister of the Economy and Innovation of the Republic of Lithuania, Jovita Neliupsienė, Vice Minister of the Ministry of Foreign Affairs, Paulius Saudargas, Deputy Speaker of the Lithuanian Parliament, the Seimas, MPs Laima Andrikiene and Matas Maldeikis, other distinguished guests.

The head of Taiwan’s representative office said that following the agreement reached by the governments of Lithuania and Taiwan, the Industrial Technology Research Institute of Taiwan would also cooperate with Lithuania’s Teltonika IoT Group in the development of semiconductor design and manufacturing technologies.

According to him, Taiwan has decided to commission its Industrial Technology Research Institute to directly cooperate with Teltonika – a leading Lithuanian electronics manufacturer – to build its semiconductor technology capabilities through a total solution package.

“I am also pleased to share with you that Taiwania Capital has set up its office in Vilnius with an investment manager to further tap into mutually beneficial investment opportunities locally. Taiwan would like to create win-win cooperation between Taiwan and Lithuania. We aim to create strategic cooperation for us to combine the competitive advantages of companies from both countries in high value-added industries,” Mr. Huang said.

Speaking on semiconductor cooperation, he said: “Semiconductor is the oil of the 21st century…Are we going to trust semiconductor chips produced by companies of authoritarian countries? The answer is obviously a no. Therefore, the universal values of democracy, freedom, human rights, and rule of law are fundamental in the value of semiconductors. The more advanced the chips, the more important the universal values are. As Taiwan is a globally recognized full-fledged democracy with advanced technology, it is no coincidence that Taiwan supplies 93 percent of the advanced chips in the world. Democratic values as a whole is an indispensable part of advanced technology.”

“As Lithuania demonstrates its strong support for democratic values, Taiwan and its democracy in the face of authoritarian China’s coercion, we trust Lithuania to be a rare and reliable partner for sharing Taiwan’s precious semiconductor expertise that Taiwan has developed for more than 50 years. Taiwan would like to share it with Lithuania as we are strong value partners,” he said.

In his words, to cultivate the human resources for developing the semiconductor industry in Lithuania, the Ministry of Foreign Affairs of Taiwan has provided 27 scholarships for Lithuanian students.

In witness of the difficulties that Lithuania suffers from China’s economic coercion, Taiwan stands with Lithuania, he emphasised.

According to the head of Taiwan’s representative office in Vilnius, Lithuania’s exports to Taiwan rose by 30 percent in the first half of this year compared to the year before.