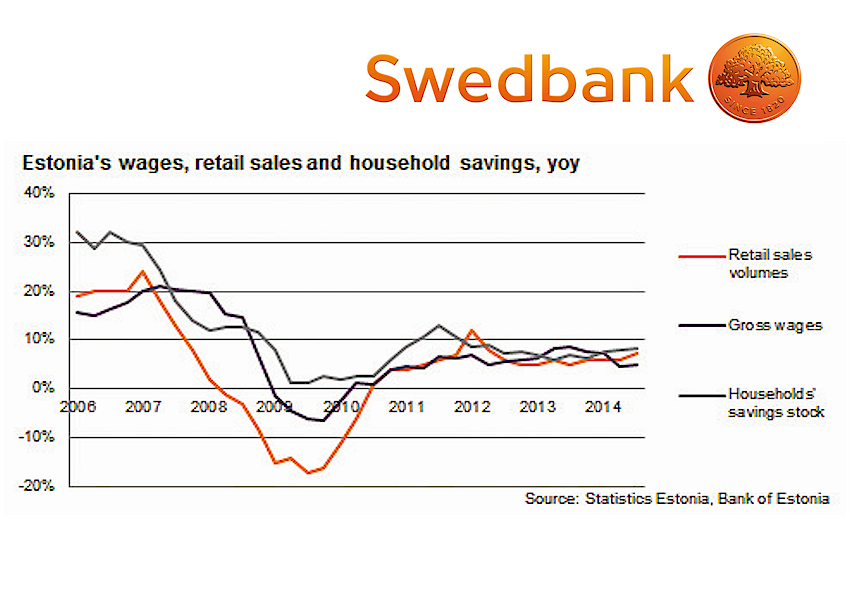 In the third quarter, average monthly gross wages increased by 5.0 percent year-on-year in Estonia. As prices declined, gross wages jumped by 5.6 percent in real terms.
Among sectors, in the third quarter, wages increased the most in real estate, agriculture and finance compared with the 3rd quarter of last year. Wages declined in the ICT sector (due to a 53 percent decline in irregular bonuses and premiums per employee in this sector) and did not change in tourism.
Most households’ financial situation is good and they are optimistic about their future. A survey by the Estonian Institute of Economic Research shows that in November, consumers’ economic confidence improved compared with October. This was supported by higher income and savings as well as a lower unemployment rate. A decline in consumer prices pushed real income levels further up.
Around half of the respondents felt that in a year, their financial situation would be the same; a quarter of households expected their financial situation to improve. The share of households able to save is at its highest level after the crisis. At the same time, consumption remains strong, too. The average growth of retail sales volumes was 7% in the first 9 months of 2014.
The Baltic countries have been commended for a quick adjustment of labour costs, increase in efficiency, and repair of public sector finances, all of been rapid. Productivity can be increased through structural reforms and improvements in the institutional environment, education, and, finally, investments, especially foreign direct investment (FDI), which allow for spill-overs and technological transfers.
Strong wage growth will continue next year. Gross wages will increase by 6 percent in 2015, according to our latest forecast. Minimum wages will be raised by around 10 percent, while the wages of public sector workers are expected to be 3 percent higher, according to the draft state budget currently discussed in the parliament.  Average net wages will be lifted by lower labour taxes. Income tax rate will decrease by 1 percentage point and unemployment insurance tax by 0.6 pp next year.