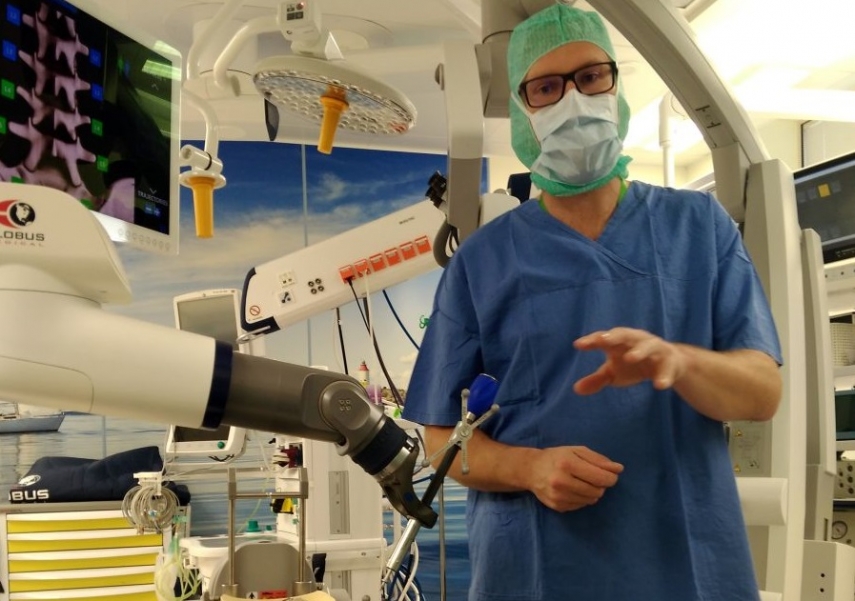 In September, spine surgeons at East Tallinn Central Hospital started performing surgeries using a new robot, which helps surgeons place implants and navigate the spine. The robot is the first of its kind in Northern Europe.

“We performed our first surgery with the robot on the same day as India,” says Dr Taavi Toomela, Head of the Centre of Spine Surgery of East Tallinn Central Hospital. “There is no similar robot in Northern Europe or Russia. In fact, there are only five such machines in Europe. It will completely and permanently transform the way spine surgeries are performed,” He adds that there have been 12 robotic-assisted surgeries at the centre.

The robot, officially launched in the US at the end of last year, is called Excelsius GPS. It helps surgeons place implants and navigate the spine and, according to Toomela, is a huge step forward for spine surgery. “Improving implants in spine surgery is a small step, but the fact that surgeries can be done so quickly, so efficiently and with so little risk is a huge step forward.”

“A model of the patient’s spine is displayed on the screen, allowing me to plan the surgery and screw placement,” explains Dr Toomela. “And then, with the help of the robot, implants are placed accurately in exact locations. The surgeon plans and fixes the screws, the robot assists.”

According to Toomela, all common back surgeries can be done in a minimally invasive manner with the help of the robot, which means much less harm to the patient. For the patient, this means shorter surgery time and faster recovery. “It involves much less trauma for the patient. The robot makes minimally invasive surgeries much safer and more efficient. Similar surgeries were possible before, but surgeons had to take hundreds of x-ray images or be very experienced and know exactly how to operate through small incisions and deliver an implant to a precise location. Now the robot will assist you and show you the right location in the spine to place the implant.”

“Before, we relied on multiple x-ray images to guide us along the patient’s spine. With the new imaging systems, patients are exposed to less radiation as well.  Despite the lower radiation exposure, however, image quality is still good enough. Now we are able to send this image to the robot which, based on specific markers, can accurately determine the position of the spine and where the implant should be placed. The robot eliminates the need for multiple investigations. We just upload the images to a computer and rely on them.”

According to Toomela, 90% of spinal cord injuries in Estonia are mild and can now be managed with an hour-long surgery. 10% of the injuries are more complex. “It usually takes an hour to get to the spine and close the wound, plus place the screws,” says Toomela. “In addition, the robot can be used to stabilise inflammatory processes or treat certain degenerative conditions of the spine, such as spinal instability and disc herniation. And that is what we have now started doing.”

The new robot can also help patients who could not undergo surgery before. “We can operate on high-risk patients who require minimally invasive and fast surgery. For these patients, open surgery was previously not an option. Thanks to new opportunities and with the help of an experienced team of critical care doctors and anaesthesiologists, we are now able to do it.”

“Having these opportunities is one thing; developing new technologies to the point where surgical treatment will lead to an improvement in the quality of life and faster recovery is another.”

According to Toomela, the robot represents another step forward. “The number of open spine surgeries will now begin to decline. Today we are the first in the Nordic countries to have a centre of spine surgery with such opportunities. However, in five years, there will be a robot in every hospital where spine surgeries are performed.”

East-Tallinn Central Hospital has been investing in the Centre of Spine Surgery for years and the centre has developed rapidly. “There is now so much necessary equipment that we are starting to run out of space. Modern operating rooms are much larger to accommodate all the modern and necessary equipment. We have come a long way and now need another operating room. In light of this, the creation of the Tallinn Hospital is absolutely vital.”