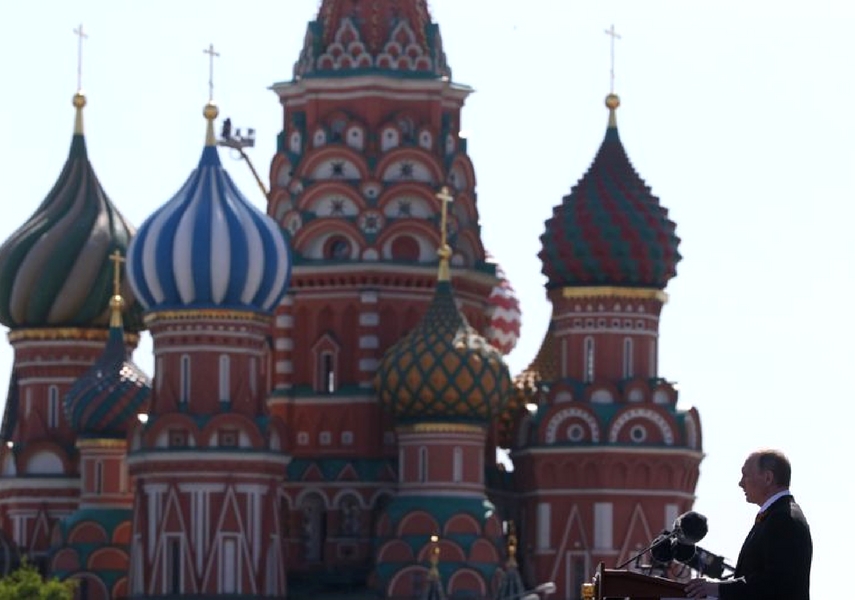 European Council President Donald Tusk said after meeting with Donald Trump on Thursday that the two had diverging views on Russia. Though no details of the differences have been divulged, one can safely assume Trump was more dovish on Russia than Tusk -- despite all his troubles with the Russia-related scandal at home. To some, it may suggest that Russia has some leverage on him; to me, it means Trump still holds on to the notion that he can build a pragmatic relationship with Russian President Vladimir Putin.

The shape of such a relationship, however, is not obvious. It's more complicated than the simplistic ideological dilemma between the appeasement of a rogue regime and a cynical understanding of American military and economic interests. The fundamental issue is whether the U.S. wants a long-term relationship with Russia that goes beyond the tenures of Trump and Russian President Vladimir Putin.

The answer to that question may be "no." Some of Putin's fiercest enemies, especially in Ukraine, hope his corrupt, oil-fed regime is leading Russia toward a Soviet-style collapse and disintegration. If that's your prediction, a long-term relationship isn't necessary and all that's needed is enough strategic patience to bring about that outcome. Harsh economic sanctions and pressure on the oil price should eventually do the trick, perhaps even with benign consequences. After all, Western leaders who feared the Soviet Union's collapse as a threat to global stability turned out to be overcautious: The mafia didn't get a hold of Russian nuclear weapons and no Yugoslavia-style war broke out in the post-Soviet space.

Waiting for Russia to implode sounds like the tactic employed by the Komodo dragon, whose bite injects a blood-thinning poison into a prey's blood. The giant lizard then follows the prey as it bleeds to death. The problem with this approach is that while the Komodo's hunt ends when the victim dies, Russia's not going to die even if it ever falls apart, which is not likely anyway because it's far more resilient economically than the Soviet Union was. The U.S. will need to build relations with multiple rather large, resource-rich territories with unpredictable political leanings and military impulses. Only a minority of post-Soviet states ended up choosing a pro-Western orientation, even after 25 years of U.S. effort. Betting that a disintegrating Russia will be easier to handle is a mistake. For example, the Caucasus, if it ever splits off, is more likely to lean toward Islamic fundamentalism than toward the West.

So a long-term relationship with Russia based on recognition that the country is going to be around for a while is probably a good idea. Russia is big, easy to find on the map. In a pinch, it's capable of near-autarky. And it's been a military power to reckon with for centuries. Putin will give up power, die, or both at the same time -- but the country that's become hard for many people to detach from his personality is going to endure.

The U.S. could choose to treat Russia as a long-term geopolitical rival, a dangerous counterweight to Western values, a global corrupting influence in other nations' elections and more. After all, the Byzantine tradition that spawned Putin has been one of the most potent strains of Russian life for centuries, and it won't go away when he's gone. Deciding that this strain is the essence of Russia, and fighting against it even when its representatives aren't ostensibly in power, is a clear, principled stand. It's essentially what George Kennan advocated in his "Long Telegram," and much of Kennan's description of the Soviet Union in 1946 fits Putin's Russia, so that's an argument in favor of the approach Kennan described quite succinctly. Russia, he wrote, “is impervious to logic of reason, and it is highly sensitive to logic of force. For this reason it can easily withdraw -- and usually does when strong resistance is encountered at any point. Thus, if the adversary has sufficient force and makes clear his readiness to use it, he rarely has to do so. If situations are properly handled, there need be no prestige-engaging showdowns.

All the U.S. needs to do, then, is demonstrate convincingly but carefully that it can use force, and Russia -- with or without Putin at the helm -- will retreat. It's not clear, though, whether the U.S. can afford to project strength every time Russia provokes it. Would a U.S. administration enhance or reduce its popularity by going all-in in Syria to remove President Bashar al-Assad? How many U.S. voters would agree to a military adventure in Ukraine? Clearly, less resolute U.S. action is not seen in Moscow as a credible show of strength. Putin is always willing to go an extra step, because he's not held back by any democratic baggage, and the likelihood that Russia will have other rulers like him on the long-term horizon, is quite high. That undermines the neo-Kennanist narrative.

There is an alternative to the Komodo dragon tactic and the Kennan deterrence doctrine. It's to ignore Putin's self-serving vision of Russia as a conservative, Orthodox bulwark against Western rot and Islamism as a flimsy propaganda construct, and to see the country, ultimately, as part of Western civilization. It's not much harder than viewing today's Hungary or Poland through that lens, despite the setbacks democracy and Western values have suffered in these countries.

Such a perspective would dictate a clear strategy: Cooperate with Russia where it's acting fundamentally like a Western country and confront it where it isn't. For example, Russia's support of the secular Assad regime against Islamic fundamentalist groups is in the Western tradition. Despite all the crimes Assad has committed, his fall would have made non-Sunni communities in Syria all but impossible to protect. Letting Russia prop up Assad and allying with it in the fight against ISIS wouldn't break with the long U.S. practice of backing pre-Arab Spring regimes throughout the Middle East and making alliances with repressive Gulf states. The U.S. isn't morally or ideologically bound to back the anti-Assad opposition: If it ever has the run of the country, it will not turn Syria toward the West.

On the other hand, Russia's territorial grab in Ukraine was decidedly un-Western. The U.S. was right to try to strengthen Ukraine economically and institutionally in its wake, though perhaps wrong in its choice of political forces to back, since the corruption of Ukraine's current leadership risks discrediting Western values in that country. The U.S. decision to withhold lethal weapons from the Kiev regime, however, was correct because arming it could have led to an escalation that could potentially harm the Western world.

Russia harbors an essentially Western desire for free trade and open borders. It's evident from its attempts to build a customs union with former Soviet states, its benign attitude toward emigration and immigration, and its persistence in seeking to join the World Trade Organization despite political obstacles. That desire deserves support. Sectoral economic sanctions that prompt the Putin government to retaliate are a mistake: They push the country in the opposite, non-Western direction.

Personal sanctions against officials who push anti-Western, Byzantine policies, those who have taken part in aggression against Ukraine, those who violate human rights and persecute minorities or dissidents are perfectly justified. The West, and the U.S. in particular, would also be justified in banning Russian state-owned media outlets: The propaganda machine is an affront to the Western idea of a free press. The West has every right to withhold its welcome from certain representatives of the Russian regime and demonstrate its hostility toward what they stand for. But sanctions directed against Russia as a country and Russians as a group are counterproductive. The West should relax visa policies, perhaps even offer visa-free travel to Russians and create more opportunities for them in universities and Western companies. The real reason the European Union is doing it for Ukrainians isn't to reward the government in Kiev for being good boys and girls. It's to give Ukrainians an opportunity to taste Western life, study it and build it at home. Russians should also have that opportunity; otherwise alternatives to their current government will not naturally occur to them.

Putin and his men enjoy Russia's current toxicity in Washington and Brussels. It's a bit counterproductive, but it means recognition for their prowess as trolls and hybrid warriors, and it shows Russians they're hated, feared, not wanted in the West. That sense is the root of domestic support for Putin's policies. That's the opposite of what the U.S. would want if it saw Russia, long-term, as part of the West.

Making a deal in Syria, expanding trade and easing travel for Russians while backing Ukraine's pro-Western course, maintaining personal sanctions against Russian officials, and fighting Russian state propaganda looks to many Westerners like a self-contradictory policy. It's not. It's about dealing with the current Russian leadership only to the extent necessary to maintain the long-term view that Russia is part of the West. Russia's seen regime change more often than most Western nations. The pendulum will swing back and forth, regimes will come and go, but the country and its people remain, and keeping the door open for Russia and Russians -- not just promising to open it if certain conditions are met -- is a powerful long-term enticement.

The Trump administration doesn't appear to be into long-term thinking. Instinctively, however, Trump and his allies appear to embrace some seemingly contradictory policies that would support the kind of long game I have described. Tusk, for example, found that Trump shared his anti-Kremlin views on Ukraine, though the U.S. president clearly leans toward working with Russia in Syria. That's a good place to start; it won't be the first time that intellectual arguments need to catch up with instincts.