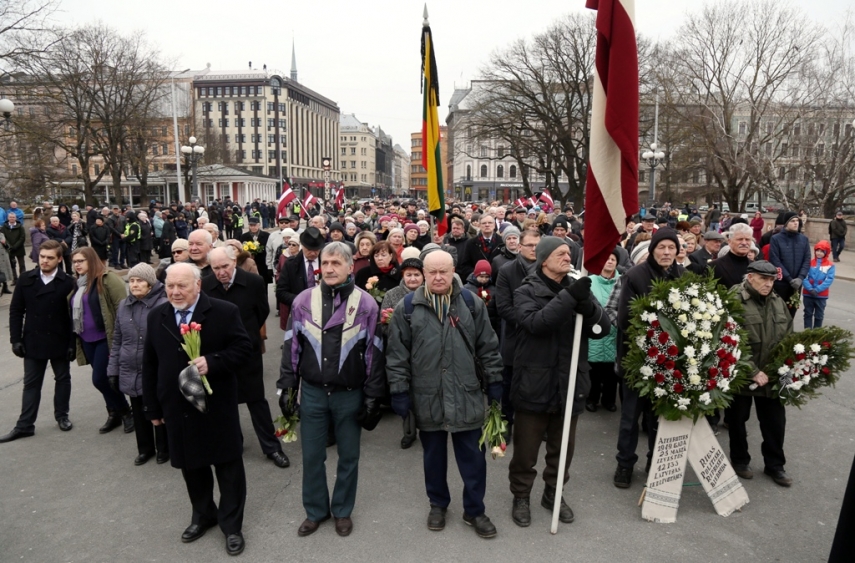 RIGA - Several hundred people, including the Latvian top state officials, participated in the commemorative event for the victims of the Communist genocide in Latvia on Sunday in Riga.

There was the traditional commemorative procession to the Freedom Monument in the Riga center followed by the flower-laying ceremony.

Latvian parliament speaker Inara Murniece (National Alliance) with her daughter and a number of ministers and lawmakers were among the participants of the procession.

The commemorative ceremony at the Freedom Monument was attended by Latvian President Raimonds Vejonis, Prime Minister Maris Kucinskis (Greens/Farmers) and other ministers, foreign diplomats and the Latvian top militaries.

The Latvian president in his speech said that Latvia should learn from the previous generations and take strength from them to make important decisions at crucial times.

"We can learn [from the deportees] what it means to belong with Latvia - to always carry Latvia in your heart, to preserve our language and culture, to pass our traditions on to the next generations. Therefore let us honor Latvia's freedom by remembering 42,322 our fellow citizens - parents and grandparents, children and neighbors," Vejonis said.

Today Latvia marks 69 years since the second-stage of Soviet mass deportations which took place on March 25, 1949. Historians call the 1949 deportations to Siberia one of the most tragic days in the modern history of Latvia.

Many of the deportees died on their way to the exile destination, others spent long and difficult years in the northern regions of Russia, fighting for their and their children's survival in inhumane conditions. Those, who managed to return back home after years of exile, had strongly suffered morally and physically and had lost their property. Furthermore, the Soviet regime treated them with suspicion, making it difficult to obtain a relevant education and even to choose profession and place of residence.