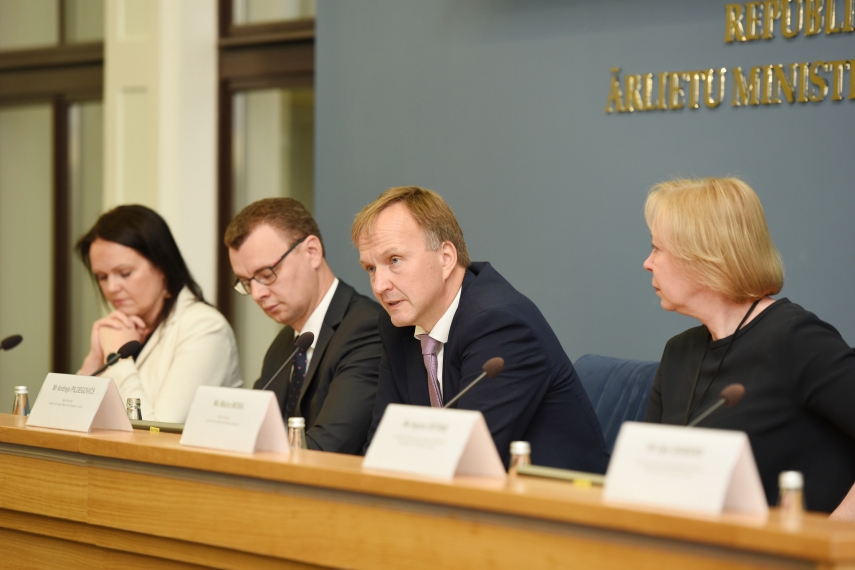 RIGA - On June 27, 2018, the State Secretary of the Latvian Ministry of Foreign Affairs, Andrejs Pildegovics, held a briefing for diplomats accredited in Latvia on the Latvian Presidency of the Council of the Baltic Sea States (CBSS), due to begin on July 1, when Latvia takes over from Sweden, LETA learned from the ministry.

During its Presidency, Latvia will continue moving actively forward with an important CBSS priority – a safe and secure region – which includes issues rooted in a multidisciplinary approach, such as counteracting all forms of trafficking in human beings, combating organized crime, protection of children at risk, civil protection, and border control.

The analysis and implementation will also begin of "A Vision for the Baltic Sea Region Beyond 2020" produced by the CBSS Vision Group. On June 18, the report was presented at the CBSS Foreign Ministers’ meeting in Stockholm. Alongside other independent experts, Professor Zaneta Ozolina from the University of Latvia presented our country in the Vision Group.

The State Secretary of the Ministry of the Interior, Dimitrijs Trofimovs, the Director General of the CBSS Secretariat, Maira Mora, and representatives from the National Cultural Heritage Authority and the Ministry of Regional Development and Environmental Protection were also taking part in the briefing at the MFA.

Latvia’s upcoming Presidency is going to be its third since the establishment of the CBSS in 1992. Working together in the CBSS are the three Baltic States, five Nordic countries, Germany, Poland, Russia, and the European Commission. The Council’s Secretariat is located in Stockholm.

Latvia will hold its Presidency until June 30, 2019, and hand it over to Denmark.