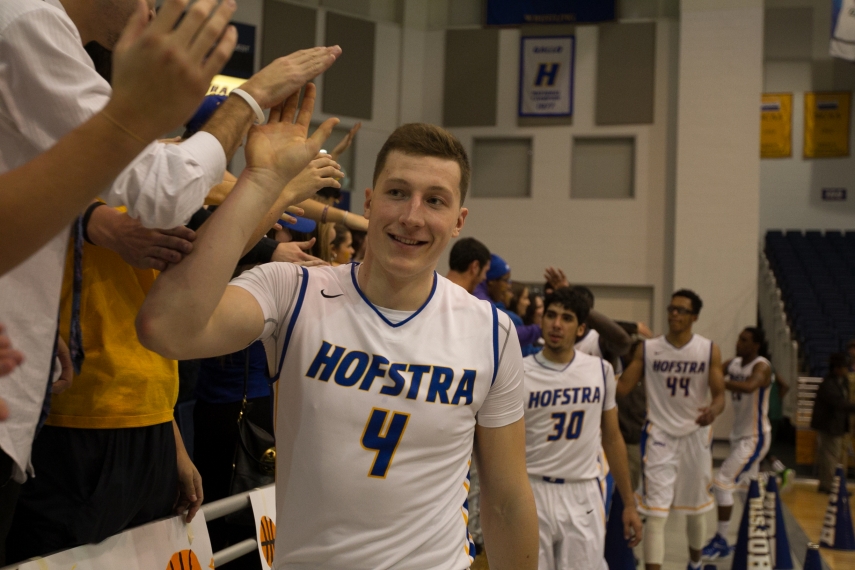 HEMPSTEAD, N.Y. – Rokas Gustys has been salivating to get back onto the court, after an undisclosed injury kept him out for more than a month. The big freshman from Kaunas made a splash in just his third collegiate game, on Nov. 21 at home against Stony Brook University when he recorded a season-high five steals and 10 rebounds.
This immediately opened people’s eyes to his abilities, but he was soon sidelined by injury and unavailable until his breakout performance on Jan. 5 at home against the University of Delaware.

In just 20 minutes of play, Gustys recorded his first collegiate double-double with 11 points and 16 rebounds: a season-high for the entire Colonial Athletic Association. He also had five blocks in the 71-58 victory.
For someone who didn’t have a “welcome to college” moment because of the high-calibre Division I-type players he competed against at Oak Hill Academy in Mouth of Wilson, VA, this thrashing against Delaware was surely his welcome- party to the NCAA.

The second he stepped on the court he began throwing his big 6-foot-9-inch frame around, boxing out in the paint, and setting picks like he was running a clinic. He was the main cog in Hofstra’s offensive and defensive fronts that evening. It was exactly what Hofstra coach Joe Mihalich was expecting when he recruited the player affectionately known as “Rock”.
This is a player who helped the national high school power in Virginia to a 41-4 record and No. 4 ranking in the USA Today Sports Super 25 in 2013-2014, all while averaging 12 points and a team-high nine rebounds per game. He also shot a team-high 62 percent from the field.

Mihalich drove the 10 hours from New York to Virginia numerous times, through winding roads and mountainous terrain, and this dedication to recruitment resonated with Gustys. A final visit to the campus in Hempstead, N.Y. with his mother and uncle sealed the deal for him. He chose Hofstra over Wake Forest, Georgia Tech, Boston College, Rhode Island, Georgia, Tulane and Hawaii among others.

“We really liked the place and coach is really what led me here,” he said, “and when a head coach comes to see you that much and drive through crazy mountains, he showed me a lot of love and a lot of attention. He really wanted me and it was easy to decide.”

Mihalich, in his second season at Hofstra after 18 years at Niagara in upstate New York, describes Gustys as fearless.
“You saw how competitive he was,” said Mihalich. “You saw he was a winner. As a college coach you like to recruit winners. I saw someone right away who was a tough kid, a good player and a winner.”
When Gustys graduated from the Sabonis Basketball Academy in his hometown of Kaunas, the second largest city in Lithuania and near the centre of the country, he had the opportunity to shake the hand of his country’s basketball hero, Arvydas Sabonis.

Gustys is not short by any means, but even he marvels at the size of Sabonis.
“I really liked to watch him play,” said Gustys of Sabonis, a member of the FIBA Hall of Fame and Naismith Memorial Basketball Hall of Fame, is President of the Lithuania Basketball Federation.
Gustys has not been home to Lithuania since last summer when he was trying out for the youth national team, and likely won’t be back until next summer. He’s only lived in America for three years, and has had an easy time assimilating.
“There are lots of Lithuanians and Eastern Europeans,” he said. “I often find some cool places to eat and the weather reminds me most of home.”

Long Island’s temperature is known to be very humid in the summer, but also frigid in the fall and winter months.
Considering he looked up to Sabonis, it’s no surprise he brings a dominant game to the floor. He says defence is his biggest strength and is improving in shooting and posting up.
“I play hard every time I step on the court,” he said.

After two poor seasons with ten or fewer wins, Hofstra is in the midst of a season with great expectations. Sports Illustrated, among other publications, chose the Pride to make the NCAA Tournament, something the school hasn’t achieved since 2001.

Every college basketball team in the country says they want to win a conference championship and clinch a spot in the famed March Madness tourney, but when Gustys speaks about it, he shows genuine hope and passion about the topic.
“I’m trying to do everything for the team to reach those goals,” he said. “We have to get better every day. You feel it because Coach Mihalich is a really good coach and everyone expects to win.”
Hofstra went 9-4 in non-conference games and is 13-6 through Jan. 18, going 4-2 in early Colonial Athletic Association play.

A member of the Lithuanian National Team that placed second in the 2012 U18 European Championship and third at the U19 World Championship, he said he has set personal goals to make the student national teams and Olympic squads in the near future.
If he continues to pull in ten rebounds per game and shine for a Division I school on the rise, the sky is the limit for Gustys -  and his coach agrees.

Mihalich added : “He’s as tough as can be, a real hard worker. His national team did a great job of getting him ready. He’s really skilled, understands the game, and has a great basketball IQ. He’s a coach’s dream.”