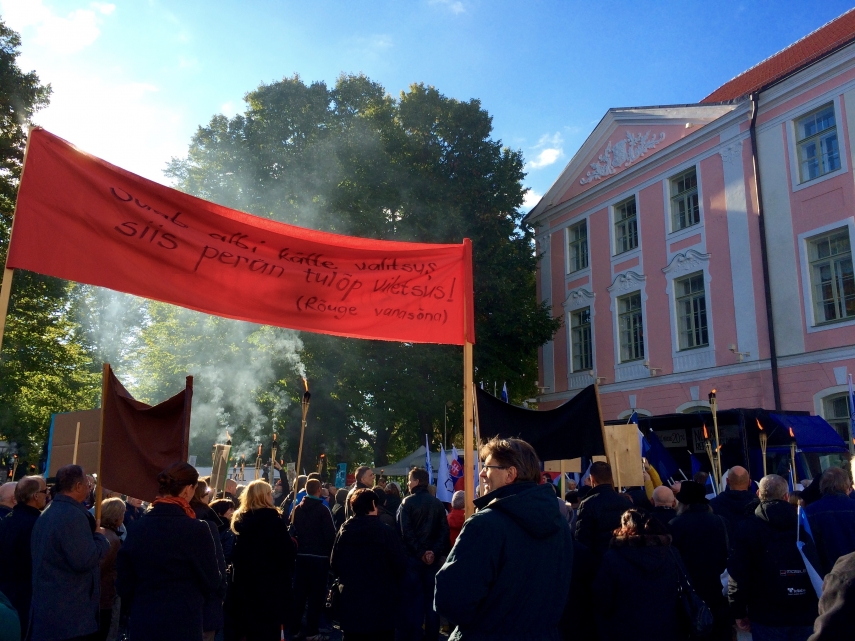 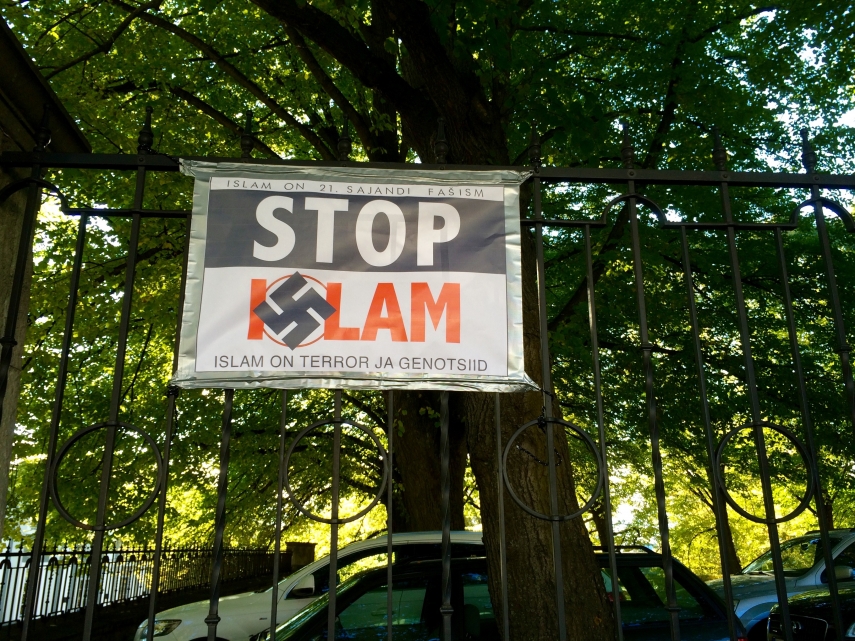 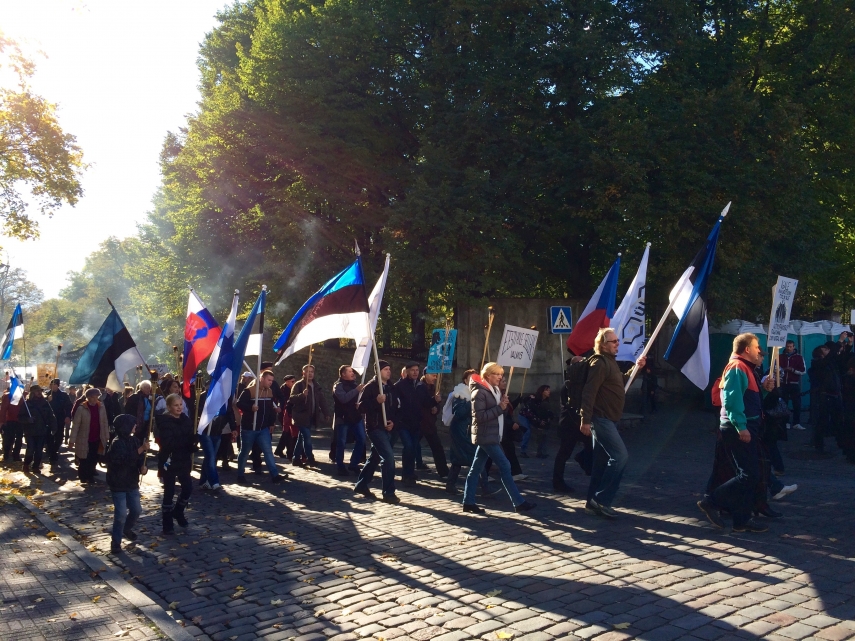 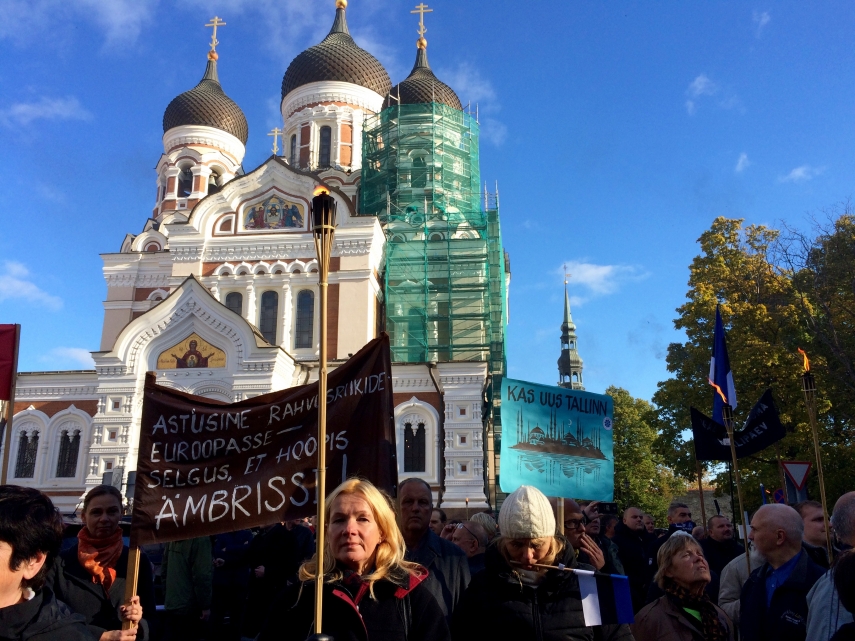 TALLINN - Protestors marched through the Estonian capital today bearing flags, banners, and torches of fire — part of a 24 hour anti immigrant rally calling for stricter EU border controls and a national referendum on whether Estonia should take in EU quotas of refugees.

The rally – which is currently ongoing at Toompea outside the Riigikogu, Estonia’s parliament -  is organised by a number of Estonia's right wing parties, including the European National Front, the Conservative People's Party (EKRE), the People's Party of Unity (RÜE), with grassroots organisation from several Facebook groups.

It comes after months of protracted negotiations between EU interior ministers on how to absorb the hundreds of thousands of migrants heading to the EU from the Middle East and Africa, and after a string of right wing protests in Estonia over the summer, and in the wake of an arson attack of Estonia's only immigration center.

Starting this morning outside the German Embassy in Tallinn's Old Town, the event organisers have promised the protest will continue long into the night. They also laid on buses to bring Estonian's from around the country to the capital.

At midday, The Baltic Times observed appoximately 200-300 people gathered in the shadow of the onion-domed Alexander Nevsky Cathedral opposite Parliament, marginally less than recent protests in the Lavian capital, where crowds of several hundred paraded through Riga carrying posters of European Commission President Jean Claude-Juncker with Hitler moustache drawn on.

According to local reports in the Estonian media, the protest organisers were reporting that around 1,000 had turned up.

When the Baltic Times returned to the protest at around 3 pm the crowds had dwindled to about 100 people.

One blonde woman who had red nails decorated with swirls of glitter and rhinestones, carrying a banner that read “No to the national suicide” told the Baltic Times she was at today’s march because she was against “big immigration to Estonia”.

The Tallinn resident, who did not want to give her name, said: “Estonia is only 1.3million people and 30 per cent of that is Russian residents, it is very easy to break the balance of this small old country. Estonia’s economy is very bad, pensions for old people are 300 to 400 euros, if you have nothing you can give nothing.”

Kristiina Ojuland, a former Foreign Minister of Estonia and former member of the European Parliament, has already addressed the crowds.

Speaking to The Baltic Times at the protest she said: “80 per cent of Estonians are against this quota, this European policy, that Merkel is pushing. We are against the mass of immigrants coming to Estonia, Estonia is receiving refugees already since 2007 by the UN convention, it is [working] fine for us.

“This quota can be called totally unacceptable also like a new genocide against the Estonian people. Yes really, we already experience this in soviet time – forced migration, and due to that process like 28 per cent of Estonian population is non-Estonian.

“And if we now just try to imagine 20 years ahead then the same will happen with a new wave of immigration if we allow it but the difference is, and really the huge principle difference is, that these people are not Christians who are coming, they are muslims.

“They are coming with their own rules, their own traditions, they do not respect the western values and European laws and this is a danger - it is an islamist invasion, and we stand against that.”

Speaking about the success of the protest so far she said: “Well taking into account that this is October we are very happy that in the beginning we had a really huge amount of people, a really big demonstration, that walked through the city centre of Tallinn. We are quite satisfied with the amount of public participation.”

She added organisers were hoping more people would come on their way home from work.

Ojuland drew wide controversy earlier in the year when she criticised the European Commission’s migrant quota plan on her official Facebook page, calling for a pan-European campaign against admitting any refugees in the EU and voiced controversial concerns that "the white race is under threat" from immigrants from Africa, an assertion that caused uproar in local and international media.

Following agreements with the EU, Estonia is expected to take in between 400 to 500 refugees from southern Europe over the next two years with the first families arriving by Christmas. In the past decade the country has granted asylum to 119 people.