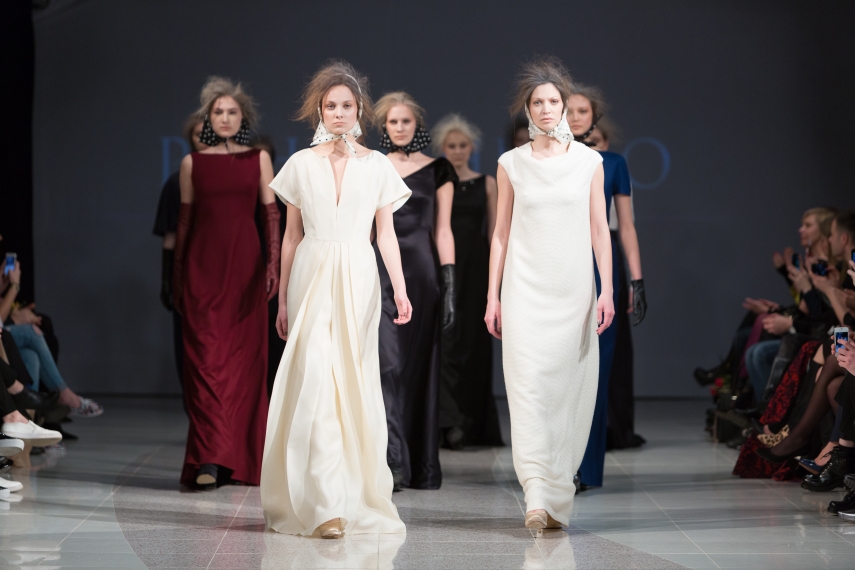 Riga is a fairy tale for fashionistas, with endless shoe shops and trendy boutiques. It can, however, put quite a large dent in a consumer’s wallet, and for the average shopper it is not really affordable. Baltic beauties are a renowned element of the fashion industry, often getting snapped up by international modelling agencies. Baltic designers are now also rising in demand and are becoming more internationally recognised with the help of events such as Riga Fashion Week.
Riga Fashion Week is one of the most highly anticipated and best organised events in the Baltics. Designers, journalists, bloggers and fashionistas from all over the globe visited the luxury department store Podium for the 22nd season of Riga Fashion Week.

RFW kicked off the event at the design space D.FAB on March 17th. It was created in cooperation with Maybelline New York and Latvian fashion brand QooQoo, which showed off its newest collection. There was a great mix of Latvian designers on display including Anna LED, Narciss, Natalija Jansone, Amoralle, Katya Katya Shehurina, Liga Banga, NOLO, Alexandra Westfal, IN by Inga Nipane, it’sME, and One Wolf and Paviljons. Pohjanheimo from Estonia and Agne Kuzmickaite from Lithuania represented the other Baltic countries. Italian brand Quattromani and Russian designer Polina Samarina also flew over to exhibit their latest designs.

Elena Strahova, President of the Baltic Fashion Federation told The Baltic Times that “the event brings people together regardless of nationality, age, status and political beliefs, thanks to its positive nature and aspiration for the beautiful.”
Madara Zvejniece Co-Founder of online clothing store Creative Latvia shared some of her personal highlights. “This year RFW was a nice surprise for me. In my opinion, many designers showed the best collections they have ever made. I really enjoyed Narciss, Anna Led, One Wolf, QooQoo and KatyaKatya Shehurina. Year by year, the quality grows. This autumn/ winter will be feminine, alluring and very London-esque with some French highlights.”
She also discussed some of the challenges facing the industry saying, “More and more Latvians appreciate Latvian design. It is quite expensive but worth having it. I think that it is very difficult to sell Latvian design abroad. There are very few but very good designers who do it successfully. It all demands a lot of work, time, energy, financial resources … We have more opportunities than, let’s say, 20 or 10 years ago. I guess it’s a matter of time. I believe that one day Riga will be similar to other fashion and design capitals”.
Latvian fashion brand Narciss also discussed the challenges facing the sector due to the small market size stating, “Latvia is not yet recognized as a serious fashion industry player. To achieve the interest of international buyers, fashion brands and designers have to participate in fashion shows and exhibitions regularly, to become more visible in an international fashion market.” Many of the Latvian designers this season showcased bold, daring colours on the catwalk. Narciss was one of the main leaders with bright oranges, canary yellows and striped Pippi long-stocking style socks. Narciss spoke to BT about the main inspirations for this collection, describing it as a merry-go-round: “when the merry-go-round spins, time, space and self-awareness disappear. The world blurs into a vivid palette of colours. This is where all the colours come from. The aim of the collection and our fashion show, within a framework of Riga Fashion Week, is about fun and celebration of joie de vivre. Exciting, magical and so carefree!”
Ulle Pohjanheimo, the designer of Estonia’s Pohjanheimo couture said she searches for her inspirations everywhere - from music, books, people and nature. “I love Estonian winters  and of course the nature.” The materials she uses include silk, chiffon, cashmere and merino wool, with the emphasis on wool jersey and its various structures. “My ultimate favourite is bonded cashmere, our clean minimalistic cuts and decisive lines”. The Estonian clothing industry is mostly aimed at export markets, with approximately 2/3 of its products being sold abroad - Finland, Sweden and Latvia are the top three target countries. Pohjanheimo believes that “the Latvian audience is very demanding, they are open minded and always wanting more from the designer. That kind of expectations makes me want to be better and better every time and I love that feeling. They have their own style and they are not afraid to  look different, that’s very inspirational.” The models Pohjanheimo likes to use to show off her collection should have a good height and feminine figure. She said she never uses under age models.
This season’s event displayed plenty of fresh faces on the catwalk. Svetlana, a local model who has strutted on the RFW catwalks for several years said she normally gets paid roughly 20 euros for walking per designer. “You don’t take part in the show for money, it is about fun, recognition and for a bit of fame. It is a great experience and is an amazing opportunity for new models to get noticed by international media.” Aleksandra Hilchuka from Freyja Model Agency was awarded the title of top model. The agency said Alexandra was chosen because of the amount of fashion shows she was selected to participate in. The agency also said the average age of models is around 19 years old. Some of the models at RFW were as young as 15 years old.
Stunning young ladies not only presented themselves on the catwalks but also at the after-parties that took place all around the city including at Coyote Fly. On Friday, March 20th, during the RFW after-party with DJ Rudd the finalists of the young designers’ contest “Modes injekcija” from Latvia Karina Krista and Santa Matule-Aulmane showed their capsule collections. The next Riga Fashion Week will take place on October 27-31.

The 20th International Textile Industry Fair “Baltic Fashion & Textile Riga 2015” is another event of interest for fashion fanatics, which is set to take place between the 16th and 18th of April.