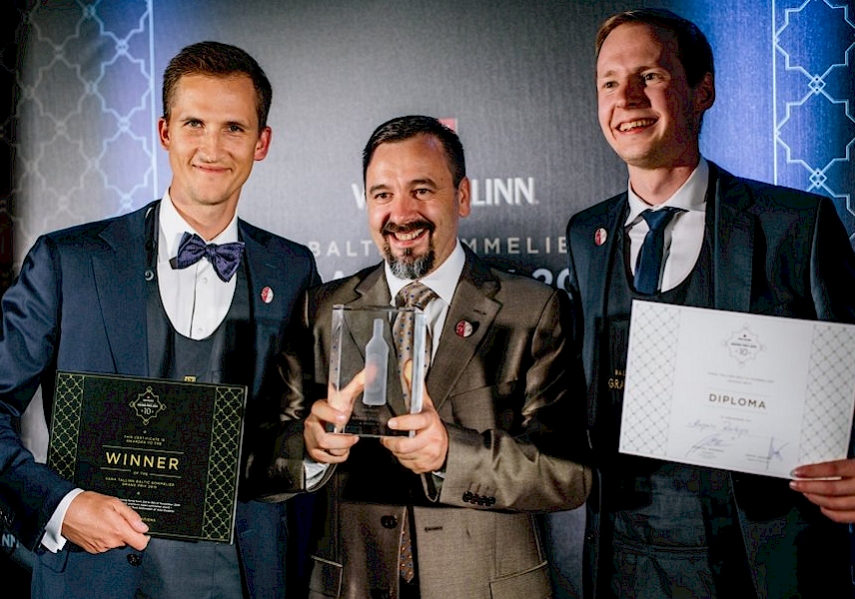 TALLINN - The title of the best sommelier in the Baltic States was determined in Tallinn on Friday at the Vana Tallinn Grand Prix jubilee tournament, which was won by Raimonds Tomsons from Latvia.
The final also saw Kaspars Reitups from Latvia swooping into second place, with Estonia’s Kristjan Markii coming in third.
Ketri Leis was awarded the title of the best young sommelier, while the special public prize went to the overall winner, Raimonds Tomsons.

“The competition was really tough,” said Raimonds Tomsons, this year’s champion. “As a competitor, I obviously wanted to win, but since I hadn’t competed for five or six years, I was a bit worried about how I would cope with my early nerves. I couldn’t have wished for a better comeback!”
“The win went to the right place,” said Urvo Ugandi. Ten years ago, Ugandi won the title of the best sommelier in the Baltic States at the first Vana Tallinn Grand Prix. This year, he was the jury chairman.

“Raimonds’ instant presence and specialised knowledge gave him a definite advantage,” Ugandi added. “The competitors’ levels were very high, as shown by their abilities to adapt to the new and, for them, the surprising structure of the final, where, as a new challenge, many tasks had to be performed while serving the group taking part in dinner, as well as interacting with the audience.”

Janek Kalvi, Chairman of the AS Liviko Board, the company supporting the tournament, believes the quality of the competitors represents an ongoing improvement in the level of restaurant service in the Baltic region.
“People have become far more aware of the essential role of the sommelier in the restaurant, and thousands of visitors in Estonia, Latvia, and Lithuania have enjoyed the skills and abilities that have been developed through this hard work,” said Kalvi.

The grand prize of the Vana Tallinn Baltic Sommelier Grand Prix jubilee tournament is a professional development trip to Hong Kong, sponsored by AS Liviko, where the winner will be able to participate in the Asia-Oceania Best Sommelier competition as a spectator.
At Thursday’s preliminary rounds, the competitors showed off their professional skills in both a written test as well as through a variety of practical tests.

The top four contestants progressed to the jubilee tournament final, where they made recommendations on suitable wine pairings to those guests participating in the gala dinner, while also decanting and serving the wine.
In addition, the finalists competed in a competition to serve sparkling wine, were challenged to decant and serve red wine, and were also tested on their professional knowledge in a quick-fire question-and-answer round. The final of the jubilee tournament took place in Tuljak restaurant, with a special dinner menu created by head chef Tonis Siigur.

Estonia was represented at the Vana Tallinn Grand Prix by head sommelier at the Lyon cafe and restaurant, Kristjan Markii, who won the title in 2010 and has made it to the final in all ten editions of the competition; Liviko HoReCa sales representative and winner of the title of Best Sommelier in Estonia in 2014, Karel Veski; Dominic restaurant sommelier Aron Rahu; and Leib Resto & Aed sommelier Ketri Leis.

Lithuania’s representation at the Vana Tallinn Grand Prix competition included Boff steakhouse sommelier Arturas Vasilionok; sommelier Ada Sakalauskaite; and Kempinski Hotel Cathedral Square restaurant sommelier, catering manager, and current holder of the title of Lithuania’s best sommelier, Narimantas Miezys.
This year, both in order to promote the field as well as to inspire young sommeliers and provide them with international professional experience, young sommeliers up to the age of 27 were for the first time invited to take part in the Vana Tallinn Grand Prix.

The now-traditional competition to find the best sommelier in the Baltic States was named after Estonia’s most popular liqueur, the legendary Vana Tallinn.
AS Liviko has organised the Vana Tallinn Baltic Sommelier Grand Prix in cooperation with the Estonian, Latvian, and Lithuanian Associations of Sommeliers since 2006.

Founded in 1898, AS Liviko is a quality alcohol producer with 117 years of history and tradition. AS Liviko has built up alcohol distribution and wholesale networks in Estonia, Latvia, and Lithuania, through which it markets both its own products as well as quality alcohol brands made by producers from around the world.
AS Liviko is one of the three largest alcohol firms in the Baltic States, placing equal importance on both the production as well as the import of alcoholic beverages. AS Liviko provides employment to 355 people in Estonia, Latvia, and Lithuania.