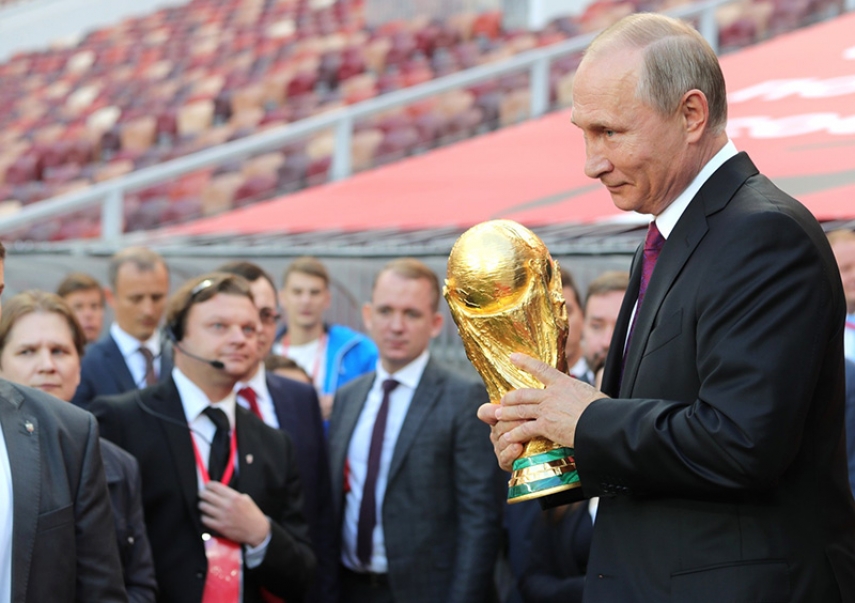 In a recent commentary published on 14 July by Stratfor Worldview entitled “The World Cup: Putin’s Political Panacea” the author, Linas Jegelevicius, who is also The Baltic Times’ editor-in-chief, put forward three hypothetical arguments. First, in hosting the World Cup, Russia managed to defuse international tensions over incidents such as the attempted assassination of former Russian intelligence office Sergei Skripal; second, the tournament also helped the Kremlin avoid a public backlash over its decision on the first day of the World Cup, to raise the retirement age – during a moment in which public protests were banned in the host cities; and that, third, despite the success of using the World Cup as an apparent diversionary tactic, it did little to assuage Russia’s economic and political grievances in the long run.

The author of the article, a well-known and respected journalist in the Baltic states, suggested, with a somewhat avuncular demeanour, that we should all just ‘sit back, relax and enjoy the show’.  Or, he implied that this was the message President Vladimir Putin was broadcasting to his country.

The author then compared this apparent tactic to the 2014 annexation of the Crimean Peninsula just weeks after the Winter Olympics, thus providing his readers with the argument that these spectacular and expensive games with a worldwide audience were really just a ruse to upstage any and all local political turmoil within the Russian Federation.

He even quotes Mr. Putin who had said: “Football fans visiting Russia for the World Cup have changed the country’s image through social networks, effectively dispelling many myths”.   These seeming ‘myths’ include issues such as a suggested state-sponsored sports doping program; meddling in foreign elections and the Novichok – Skripal affair, stated the author.

But surely, such in-house and off-shore activity attributed to Russia and its leader is not unique to

Messrs Putin, Medvedev, et al.  Are they the bad guys?

Don’t other countries and their world leaders work and think in a similar manner.  What about the much more potentially lethal scenarios developing all over the globe … let us just mention the still unresolved Korean Peninsula situation.  Let us also mention the Iran sanctions. Let us not forget to mention the present day ever-changing fate of NATO. Let us mention the Brexit conundrum.

Isn’t there a Trump card hidden in all of these and we are being dealt by Western media sources?

Is Mr Putin and his team of cohorts really behind all of these ‘stories’ as well.  Sounds like a regular Dr. Evil (aka Mike Myers) beat-up story or something that the inimitable Sasha Baron Cohen might have dreamed up in his disguise as an Army Veteran making fun (incognito) of ever gullible but supposedly media savvy politicians such as Alaskan Sarah Palin or Vermont-based Bernie Sanders.

Oh Fie, Fo … and yes … Fum!   But what about my Fee asks Mr Cohen.  Let’s be sure that Tracey Ullman did not miss out on an appropriate remuneration for her 15 July Youtube deserved savaging of the creator of Borat, Bruno and Admiral-General Aladeeen.  Shame on Cohen for mocking and humiliating the disengagement of War Veteran’s from our every-day Western society and on Ullman for making fun of a mother who’s son apparently hanged himself.  It was all beat-up and labelled ‘Entertainment’.

Yes, of course the retirement age in Russia has remained unchanged since 1933.  Do we blame Stalin for permitting a very sensible option for a very hard working nation to be able to retire at

55 for women and 60 for men.  Russia has been able, until now, to absorb and allow a few more years of ‘the grace’ for its people to enjoy at least some peace if not good health in their declining years.

The author of the commentary seems not to have noticed the fact that in Latvia (for example) the retirement age for men is presently already set at 63.5 years but life expectancy is about the same for all people in the Post-Soviet-Neo-Capitalist-Wannabe-Socialist-Monopoly states bordering Russia to the West and OTAN (Old Testament and New Testament).  This writer (63 any day now) wonders … and wonders how it will be possible to survive and make ends meet on a pension that is close to 100 euro, less than the official state minimum wage.

Mr. Linas seemed to suggest in his analysis that something was not right in Russia if most of its sports-loving citizens preferred to sit glued to their TV sets watching the Russia-Saudi Arabia match.  What a wonderful opportunity for the populace to be able to escape the everyday grind of the apparently down-trodden. Raising the retirement age was really a move to bring the Russian Federation into line with the rest of the world.  Information to hand suggests that the official retirement age in Australia, one of the world’s success story countries, is presently set at 66 years, and does not discriminate on grounds of gender. And life expectations are much higher than in the Baltic states and/or the Russian Federation.

Maybe … just maybe, the option of being ‘allowed’ to work to the age of 65 or even 70 might just have the effect of increasing the intellectual vitality of the nation’s senior citizens.  Further analysis might be necessary but it is my personal contention (now that I am two month’s short of my 63rd birthday) that being allowed to work in the public arena (and I am mobility challenged) might just be the stimulus for a greater quality-of-life through physical activity, discipline and continued social interaction (perhaps thus even saving the state from the potential ravages of a yet undeveloped Millennial Generation until it gets a handle of life’s realities).

But getting back to the Russia in-house scenario during and just after the World Cup, was it of any significance for Mr Linas to mention that the loyal opposition leader Alexei Navalny took to whatever social media he could access so as to ‘rally demonstrators to demand the government name Russian goalkeeper Igor Akinfeev a Hero of the Russian Federation.

Hardly a gesture beyond national pride don’t you think.  Don’t we all wish such honours upon our local public heroes.  Surely … so why highlight the Navalny case unless there is some sinister and obvious subtext.  If there is, then the writer should come out with it and refrain from innuendo beyond plausibility.

Sure, the buzz over the World Cup has already fizzled as those of the world wide bored but otherwise still contributing (because that is how they eke out a living) journalists now have ‘The Donald’ to bash on the issue whether he ‘would’ or ‘wouldn’t’ acknowledge the still alleged meddling of Russia in U.S. elections.  That story, too is fizzling fast in preference to yet more juicy allegations, this time by the just offended FBI, that it has secured compromising audio tapes of what may well be a Trumped-up conversation concerning pre-election Preyboy (sic) financial settlements. How was that for a near-double double-entendre!

The next story to wipe all of that under the carpet is now focussing on issues emanating from Croatia, that the division of Kosovo will definitely(!) mean world war (Again! Already?).  Maybe the $200M in defence support for Ukraine will hit my News Monitor tomorrow. Maybe the newest scandal will be from Austria where it has even suggested that the registering of Jews for the receiving of Kosher meat might become a deja-vu reality.

My preference for news stories with a happier slant is for such as the one in which Croatia helped Albania to tackle the waste thrown into the Adriatic, or an update on Prince Harry and Meghan’s planned trip to the U.S., however trite that may seem.

The most intriguing news feed off my ever-switched-on monitor concerns an explanation for the seemingly strange reason why men are wearing broken watches as an accessory.

I wonder if anybody has checked whether Mr Putin or Mr Trump even wears a watch … and … well … So What!

It’s all in a day’s work and while there are readers and media followers out there, registering their approval with a LIKE, then there will be work for all of us.  Uh, oh, my eyes just hit on a link to help me understand the 10 THINGS I should never do if I get sunburn and then which supplements are worth taking. Oh Jeez … I just swiped my i-phone and hit upon something hot:  True Facts that sound like they are Fake!

Yippee … that’s much more like my cup of tea than having to salivate my way through the story about that $500 million yacht that is in the middle of a Russian billionaire’s divorce battle.

That story should simply be scuttled as should the yacht.

Oh no!  I just had an incoming news feed (in place of my regular meal) and have become perturbed by the news that one of French President Macron’s closest political aides, a certain Alexandre Benalla has been recorded on video by eyewitnesses as having disguised himself as a riot policeman and started to physically bash some ‘innocent’ protesters.

Maybe I should take some Prozac, have a lie-down and dream my dreams (what else could they be) of avarice over the discovery of a sunken Russian (again!) Imperial ship from the distant past with 200 tons (can you believe it!) of gold valued at $130 Billion.  The Dmitry Donskoi, had been discovered off South Korea’s Ulleungdo Island. It was badly damaged following an attack by Japanese warships during the RUSSO-Japanese War and was scuttled in the Sea of Japan on 29 May 1905.

With news of such ‘stuff’ going on do I really want to waste my right brain receptors speculating on the possible date of invasion of The Baltics through Latvia as predicted by former OTAN commander General Sir Richard Shirreff in his ‘Best Seller’ 2017 War with Russia.  Mr. Shirreff even predicted the demise of the Russian leader in a helicopter crash in Siberia in late 2017.

What a disappoint it must have been for the former OTAN commander when none of his hypotheses came true.  My copy was bought and paid for by a well-meaning friend on the other side of the world who had read the book (as did I) and was concerned for the my safety and for that of my family.

I hope that at least the author of that tome knows the words to the patter song: "I Am the Very Model of a Modern Major-General" from Gilbert and Sullivan's 1879 comic opera The Pirates of Penzance.  It is sung by the comic hero Major General Stanley at his first entrance, towards the end of Act I. The song satirises the idea of the "modern" educated British Army officer of the latter 19th century. It is one of the most difficult patter songs to perform, due to the fast pace and tongue-twisting nature of the lyrics.  Has anything much changed since 1879?

Perhaps the patter song will be a good ‘Party Piece’ for H.M. Major-General Shirreff as he struts his stuff on Community Playhouse and his social circuit.

Maybe it would be best for us Latvians (and our neigbour-state Lithuanians and Estonians) to simply switch off and disconnect from the entire media grid and live out our day-to-day lives without any knowledge of military build-ups just east of Baltinava.  That’s how it was when the first occupation of the Baltic states coincided with a communist coup d'état in each country, supported by Soviet troops. On 15 June 1940 the USSR invaded Lithuania. Soviet troops attacked the Latvian border guards at Masļenki. On 16 June 1940 the USSR invaded Estonia and Latvia.