Public debate: Which Future for the European Defence and Security? 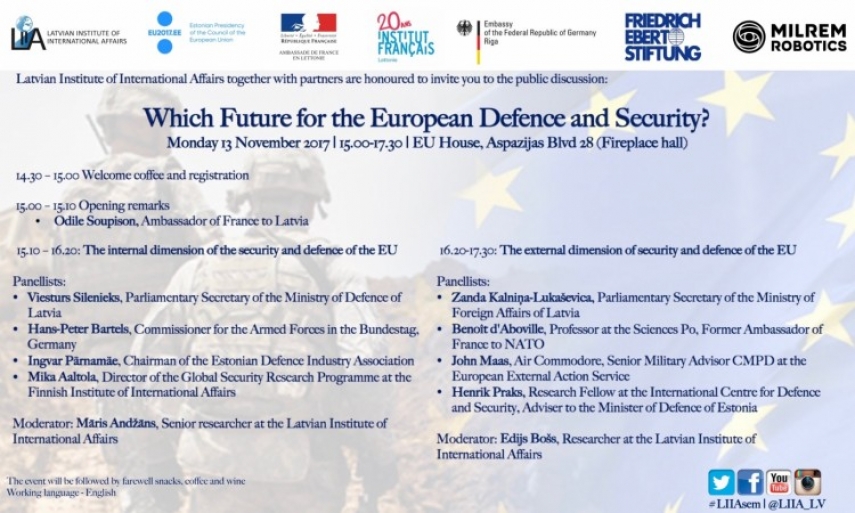 Latvian Institute of International Affairs together with partners are honoured to invite you to the public discussion: Which Future for the European Defence and Security?

Panel 1: The internal dimension of the security and defence of the EU

During the first panel we will address issues related to the status quo and future prospects of the constituent issues of EU Common Defence and Security Policy (CSDP) – strategic goals of the policy, EU defence funding, coordination of the national and supra-national priorities, European defence industry, research and development.

Viesturs Silenieks, Parliamentary Secretary of the Ministry of Defence of Latvia
Hans-Peter Bartels, Commissioner for the Armed Forces in the Bundestag, Germany
Ingvar Pärnamäe, Chairman of the Estonian Defence Industry Association
Mika Aaltola, Director of the Global Security Research Programme at the Finnish Institute of International Affairs

Panel 2: The external dimension of security and defence of the EU

The second panel will address the external dimension of the EU CSDP – the current status and future prospects of the EU missions and operations overseas, cooperation with NATO and other organizations and nations. Last but not least, it will be assessed if a more integrated EU approach can act as a supplementary element to NATO in defending the EU against external turbulences?

Zanda Kalniņa-Lukaševica, Parliamentary Secretary of the Ministry of Foreign Affairs of Latvia
Benoît d'Aboville, Professor at the Sciences Po, Former Ambassador of France to NATO
John Maas, Air Commodore, Senior Military Advisor CMPD at the European External Action Service
Henrik Praks, Research Fellow at the International Centre for Defence and Security, Adviser to the Minister of Defence of Estonia