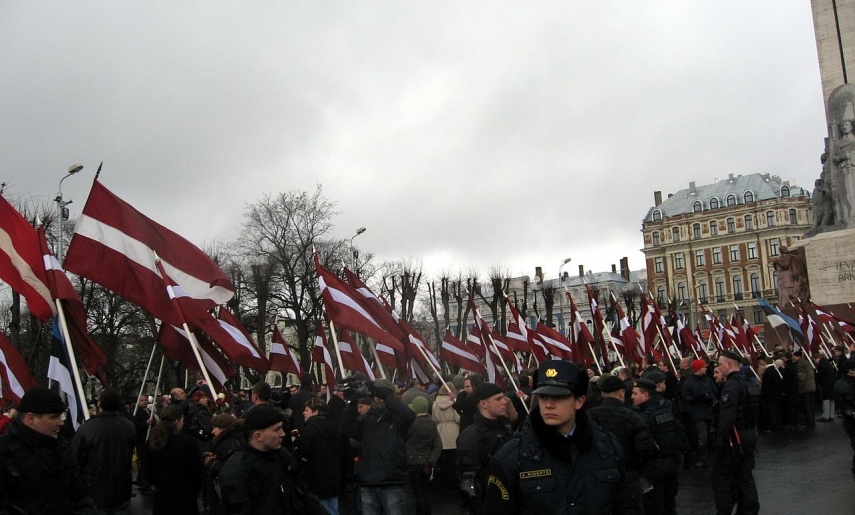 RIGA - Various pro and anti Latvian Legion Day events will take place in Riga today, as police in the Latvian capital will be on high alert.

The Limbazi Section of the Daugavas Vanagi war veterans organization will hold a march from St.John's Church in the old city to the Freedom Monument in downtown Riga. The event will take place from 11 a.m. to 1 p.m. The commemorative procession is expected to gather some 100 participants, according to the organization's estimates. A fence will be placed by the Freedom Monument during the procession.

The Society for the Support of National Soldiers to hold a meeting by the Freedom Monument from 7:00 a.m. to 1:00 p.m. in remembrance of the Latvian WWII legionnaires.

The Anti-Nazi Committee of Latvia, meanwhile, has announced a picket between 9 a.m. and 1 p.m. in the square in front of the Freedom Monument to honor the memory of Waffen-SS victims and denounce attempts to justify the crimes committed by Waffen-SS. The organizers expect about 100 people to take part in the picket. The participants of this event will be allowed to gather in Bastejkalns park next to the Freedom Monument.

The Riga City Council has decided on such restrictions because the Anti-Nazi Committee of Latvia is organizing its event to protest against the procession organized by Daugavas Vanagi.

As reported, the State Security Service believes there is a good chance that radically minded persons could participate in March 16 events this Saturday in Riga with the aim of realizing their personal objectives.

In accordance with its competence, the State Security Service will continue to assess the potential risks in connection with March 16 events.

LETA also reported, the March 16 Latvian Legion Day is an unofficial remembrance day of Latvian Legionnaires. Latvian Legion Day was established in exile by the Daugavas Vanagi association. March 16 was chosen as the most appropriate date because on March 16, 1944, both divisions of the Latvian Legion fought alongside for the first time against the Red Army. It was the only battle in World War II led solely by Latvian commanders.