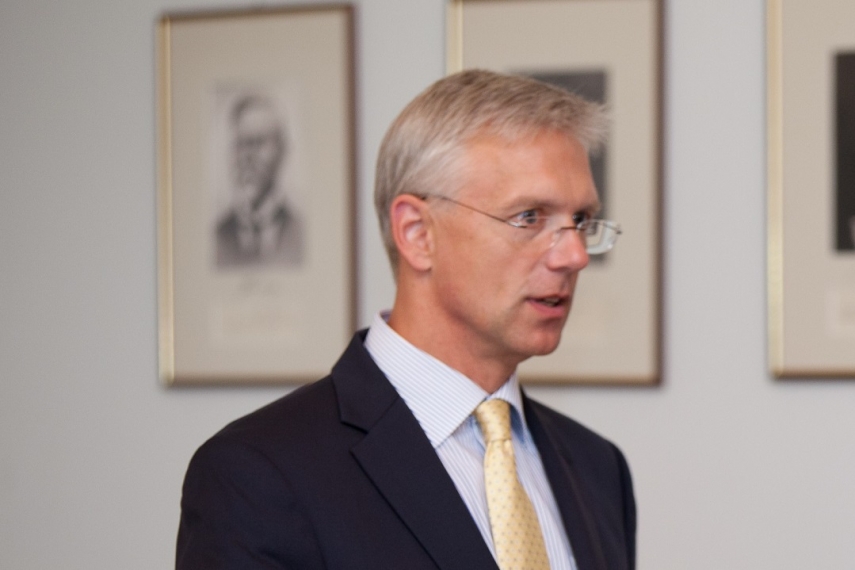 After meeting with Karins on Monday, President Vejonis told journalists that he met with representatives of several Saeima groups last Friday and that they assured him of readiness to work in the Karins-led government, meaning that this government could secure parliamentary majority.

Raimonds Vejonis went on to say that today he met with Krisjanis Karins to discuss his perspective on the government’s priorities and the distribution of ministerial posts among political parties.

Karins informed Vejonis about the candidates proposed for Latvia’s next foreign and defense ministers. The president, who had previously said that the candidates for these two key ministerial posts would have to be agreed with him, raised no objections to the candidates named by Karins.

The president wished Krisjanis Karins luck in talks on his government and stressed that politicians’ responsibility to come to an agreement quickly as it is necessary to get to work on drafting the government declaration. President admitted that this will not be an easy task as the parties have made so many promises in the run-up to this year’s parliamentary elections. "The parties will need to agree on compromise solutions to adopt an implementable government declaration," Raimonds Vejonis said.

Asked about possible concerns that a ministerial candidate might not be cleared to access state secrets, Vejonis said that this will become clear in the process – as soon as the government is approved, each minister will submit an application for such clearance, and this is how the issue would be resolved.

The president also expects the government formation process to conclude in January as there are plenty of pressing issues waiting to be tackled, including related to the coming Moneyval report and various reforms. “There must be no further delays with forming the government, so I am urging the parties to be responsible,” Raimonds Vejonis said.

Asked if he has doubts about any ministerial candidates, the president said that it is for Karins to pick his ministers and that it is up to him to decide whether to invite the proposed candidates to join his Cabinet.

Last Friday, Krisjanis Karins said that the main priorities of his government would include fixing the financial sector, ensuring the rule of law, combating corruption and shadow economy, continuing education reforms, phasing out the mandatory procurement component in electricity tariffs, improving the health system, carrying out a municipal reform and tackling demographic issues.

Krisjanis Karins also believes that reaching an agreement on the government declaration would be a difficult task but voiced hope that common ground would be found with coalition partners. The prime minister nominee intends to strike the agreement on his Cabinet and its tasks within the next two weeks.

Krisjanis Karins has proposed forming a coalition government that would include New Unity, the New Conservative Party (JKP), For Development/For, KPV LV and the National Alliance. The Union of Greens and Farmers and Harmony would be left in opposition.

The prime minister nominee would like the New Unity to chair the Finance Ministry and the Foreign Ministry. He also said that incumbent Foreign Minister Edgars Rinkevics (New Unity) could remain in his position. Janis Reirs (New Unity) has been picked for the post finance minister.

For Development/For has decided to propose Artis Pabriks for defense minister and vice-premier, Juris Puce for environmental protection and regional development minister, and Ilze Vinkele for health minister. The National Alliance wants Dace Melbarde to carry on as culture minister and Kaspars Gerhards to take the post of agriculture minister.

Krisjanis Karins is the third candidate for prime minister nominated by the president. Attempts by two previous candidates, Janis Bordans of the New Conservative Party and Aldis Gobzems of KPV LV, to form a Cabinet failed.