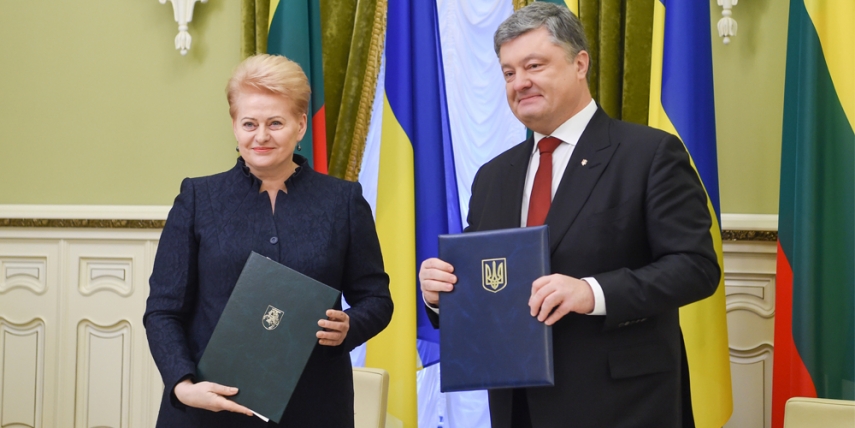 President Grybauskaite meets with President Petro Poroshenko of Ukraine [Robertas Dackus, Official Office of the President of the Republic of Lithuania]

"Sometimes Lithuania's loud voice in the European Commission, the United Nations Security Council, and other international organisations helped Ukraine a lot," he said at a joint news conference with his Lithuanian counterpart, Dalia Grybauskaite, in Kyiv on Monday.

The presidents chaired a meeting of the Council of Presidents of Lithuania and Ukraine in Kyiv as the two countries mark the 25th anniversary of their diplomatic relations.

Poroshenko noted that it was in Vilnius that Ukraine was to sign its association agreement with the EU three years ago. The refusal by Viktor Yanukovych, then-president of Ukraine, to sign the document sparked a civil protest in Kyiv that resulted in the overthrow of his government.

"(Lithuania's) military and technical help, although not very large, was highly symbolic, serving as an example to other countries," Poroshenko said.

Grybauskaite noted that at the end of this week she will participate in an EU summit that will discus the implementation of the association agreement and granting a visa free regime to Ukraine.

The Lithuanian president said that Ukraine has carried out a substantial number of painful but necessary reforms in recent years. In her words, the launch of an electronic declaration system has highlighted the need to place more focus on combating corruption.

Grybauskaite underscored that deep-rooted corruption is doing Ukraine no less harm than the war in the eastern part of the country.

In a joint statement issued on Monday, Lithuania and Ukraine declared their commitment to further strengthen their strategic partnership.

"Our states strongly condemn the temporary occupation of part of the territory of Ukraine — the Autonomous Republic of Crimea and the city of Sevastopol — by the Russian Federation and its aggression in Donbas. We call on the international community to continue active political, diplomatic, and other efforts for restoring Ukraine's territorial integrity in its internationally recognised borders in the interest of stability and security of the entire Europe," the document reads.

Ukraine's authorities estimate that more than 2,500 military personnel and 7,500 civilians have been killed in the conflict in the eastern part of the country.

The BNS journalist's trip to Ukraine was paid for by the Lithuanian president's office. This had no impact on the contents of the news report.