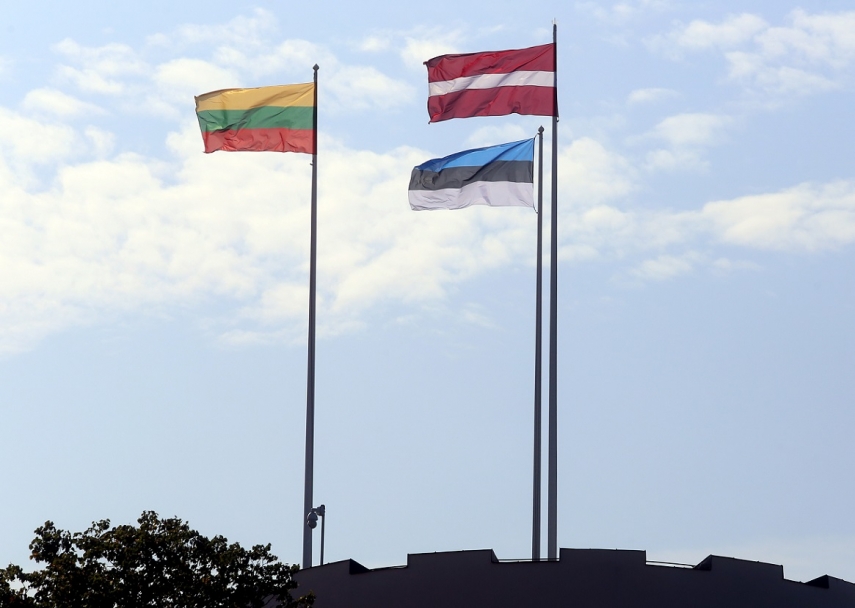 RIGA – People on the Baltic Way melted the totalitarian regime in their hands, said Latvian President Egils Levits during a solemn ceremony, flying the flags of the three Baltic states, Latvia, Lithuania and Estonia over the Holy Spirit Tower of Riga Castle, marking the 30th anniversary of the Baltic Way,

“A new morning has come in a free, independent, and democratic Latvia! It was a dream on August 23, 1989, of such a morning in such a free Latvia at our home in Europe. The Iron Curtain collapsed. People on the Baltic Way melted the totalitarian regime in their hands. The peoples of Latvia, Lithuania, and Estonia, changed the global political order with their courage, the power of their hearts and thoughts. Nothing was as it had been before. Hope emerged, the Soviet regime collapsed, and the Berlin Wall collapsed,” said Levits.

Levits thanked all the activists of the Latvian, Lithuanian, and Estonian popular movements, and everyone who stood on the Baltic Way then and those who carry on the idea nowadays.

“Today, the young generation has joined us. They go into the world with their dreams and their own views of the future. Let the power that guided the Baltic Way help achieving the targets of our young Balts!” said Levits.

Leader of the Latvian Popular Front, Dainis Ivans reminded that the Latvian red-white-red flag was hoisted over the Holy Spirit Tower already on November 11, 1988. “It was flying under siege of an incredible number of Soviet army garrisons. It symbolized our fight for freedom against a huge superiority,” he said.

He also shared a memory that when preparing for the Baltic Way on August 23, 1989, no mast was on the Holy Spirit Tower to fly flags, but the activists decided that the national flags of Estonia and Lithuania should also be hoisted there. “When seeing them, we realized that we were a formidable force, that we had reliable allies, that we were worth all together, and that we would succeed,” he said

“Of course, those 30 years since the Baltic Way have been thorny, but did we hope that they would not be like that? At the same time, there was an abyss separating us from the nightmare we lived in. Therefore, let us be happy and appreciate that the unity of the Baltic states still exists and that we are free,” said Ivans.

MEP Sandra Kalniete, organizer of the Baltic Way campaign said: “August 23, 1989, was a very difficult day because radio coordination was banned in Latvia in the morning, and we no longer had a review of whether the Baltic Way would succeed. It was taking its shape, and it was complete for 670 kilometers without interruptions.”

She also said that we must remember that incredibly formidable counter-force against which the Baltic people opposed. “We, especially younger people, are not aware of this, and I must say that I am beginning to forget what this counter-force was because 30 years of freedom have given us this sense of freedom, a sense of strength,” said Kalniete.

On the August 23, 1989, approximately two million inhabitants of Latvia, Lithuania and Estonia joined hands and connected the capitals of the Baltic states, Tallinn, Riga and Vilnius to commemorate the Molotov–Ribbentrop pact signed by Germany and the USSR on August 23, 1939.

In 2009, UNESCO included the Baltic Way in its Memory of the World Register.