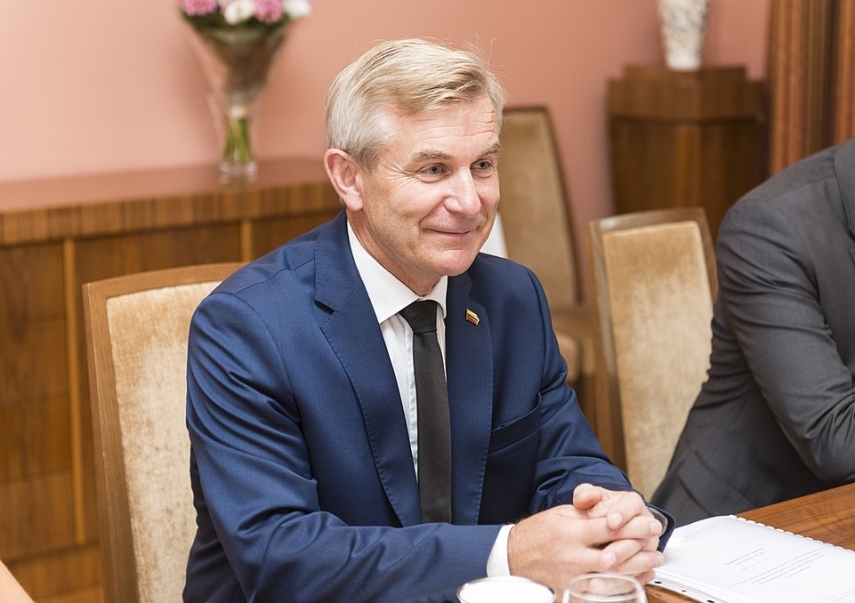 VILNIUS – The issue of Palestine's representation in the Baltic states was first raised more than three years ago, and those criticizing the proposal are carrying out a separate foreign policy, Speaker of the Lithuanian Seimas Viktoras Pranckietis says.

"It's not my idea and it's not new. As we declare everywhere that we need to be united in terms foreign policy, and let's continue doing so, there can be no inter-party disputes here. But when a group of two people start following a separate foreign policy and promoting it, and are doing that not in our official direction, it creates an impression that something is different," Pranckietis told a press conference at the parliament on Monday.

His statement came in response to criticism expressed by several opposition politicians over his recent visit to Israel when he also met with Palestinian President Mahmoud Abbas and reiterated Lithuania's proposal for Palestine to open its representation.

"We have not received any comments from those responsible for Lithuania's foreign policy. Quite contrary, I have received the president's support, and also from Foreign Minister Linas Linkevicius," the Seimas speaker said.

Audronius Azubalis, Laurynas Kasciunas, Stasys Sedbaras ir Kazys Starkevicius, all representing the opposition conservative Homeland Union – Lithuanian Christian Democrats, earlier demanded that the speaker acknowledged that the Palestinian representation proposal "was only his personal opinion which does not bind the State of Lithuania and its institutions."

Responding to such criticism, Pranckietis underlined that Lithuanian opened its Representative Office in Ramallah back in 2013, and Palestine's mission to Helsinki is also accredited to Lithuania, therefore, the issue of Palestine's representation in Lithuania was raised during state leaders' previous visits.

"The Prime Minister Algirdas Butkevicius visited Palestine in 2015 and said that the opening of Palestine's representation in Vilnius would be a really memorable event, and he had the mandate of the Ministry of Foreign Affairs to say that. The issue was raised more than three years ago," Pranckietis said.

Meanwhile, HU-LCD member Emanuelis Zingeris, who was part of the Seimas speaker's delegation to Israel, underlined that the opening of Palestine's representation should not be equaled to the recognition of the State of Palestine.

Lithuania has not recognized the State of Palestine so far, therefore, a Palestinian representation would have a lower status than an embassy and would probably be called Palestine's office for ties with Lithuania.