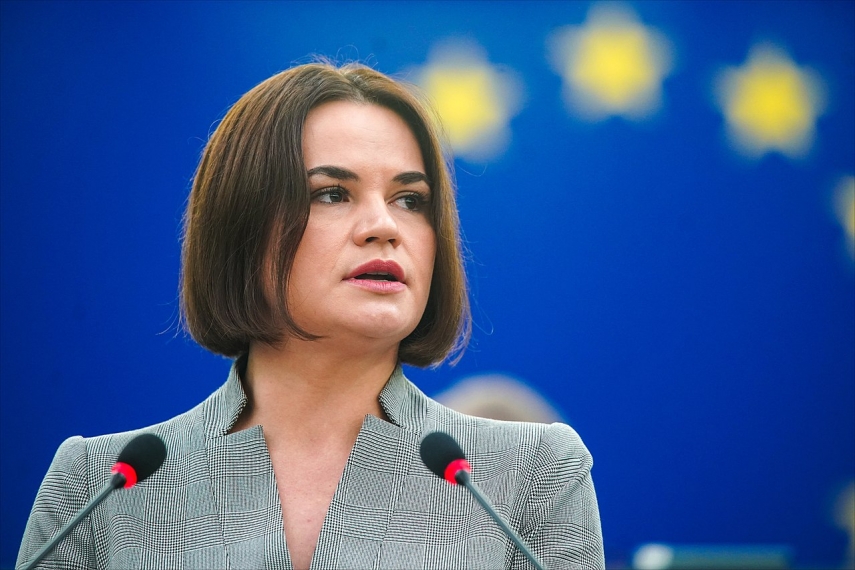 VILNIUS – Only the Minsk regime is to blame for the ongoing transit of Belarusian fertilizers via Lithuania as it has decades of experience of evading international sanctions, Belarusian opposition leader Sviatlana Tsikhanouskaya says.

"Having 27 years of experience of how to evade sanctions, the regime is taking advantage of the loopholes left in the sanctions and continues its trade in sanctioned products. I see how the Lithuanian government continues its principled work, seeking to have impact on the regime, and it is working in a principled and consistent manner to cut the regime off revenue," Tsikhanouskaya told journalists in Brussels on Monday.

"But, unfortunately, specifically due to those loopholes left, it happens so that trade not only continues but is probably even growing as the regime has experience," she said after her meeting with Lithuanian Foreign Minister Gabrielius Landsbergis.

She underlined that Lithuania maintains "a consistent position" on sanctions for Minsk and support for Belarusian civil society, adding, however, that the Lukashenko regime "is making use of weaknesses of international law" to evade sanctions. In her words, the West should stay "strong and principled" to prevent further trade in Belaruskali fertilizers.

"The whole responsibility for what is going on lies solely with the regime. Believe me, the Lithuanian government is doing everything to prevent the regime from engaging in trade as values, moral values are important for our brotherly nation. But I want to say again that we are dealing with experience, with a corrupt scheme that knows for a long time how to act against the system. (…) If democratic states are business ethics, have pure international law, so it's non-existent when we speak about the regime," she said.

Belaruskali product shipments via Lithuania did not stop after the US sanctions came into force on Wednesday as Belaruskali made advance payments to Lietuvos Gelezinkeliai (Lithuanian Railways, LG) back in November and they are sufficient to cover the cost of rail services in December, January and February.

The Lithuanian government has announced that it is seeking to terminate the state railway company's contract with Belaruskali, even though it says that the US sanctions do not directly apply to the transit of fertilizers through Lithuania.