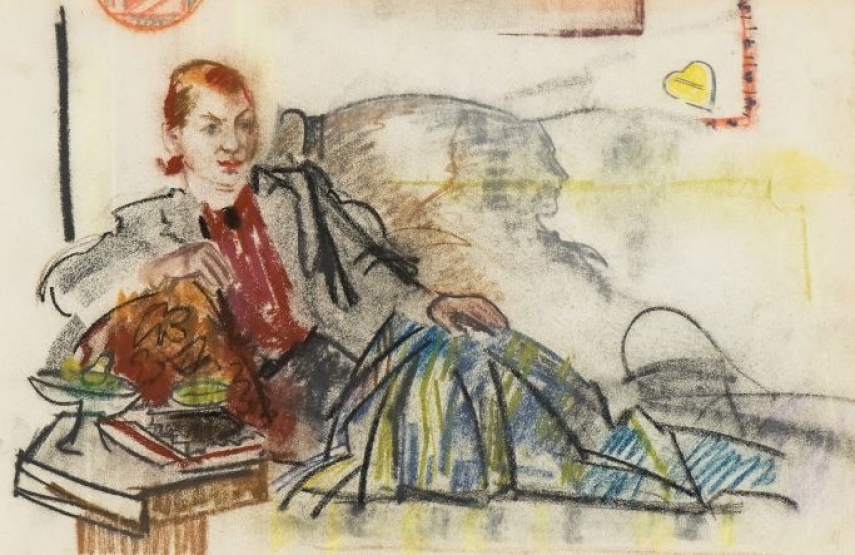 From 3 December 2019 to 25 April 2020, the Romans Suta and Aleksandra Beļcova Museum in Riga (Elizabetes iela 57a, Apt. 26) will present the exhibition Me, Lūcija Zamaič, and My Words.

Lūcija Zamaiča (1893–1965) was a poet and a writer, and the title of the exhibition is one that she used as the title for her fourth of eight poetry collections in 1923. It indicates the woman’s courage, challenges and self-belief.

The beginning of her life story was typical for that time. Lūcija was born in 1893 in the Vecsaule Parish and went to school in Bauska, Jelgava and then Riga. She married her husband early and travelled with him from place to place. The young wife wanted to compose poems, found all kinds of impressions, and published her first collection, My Soul, in 1917.

Lūcija Zamaiča would go on to release several compendia of poems and prose, and author also was involved in the world of publicity. Using pen names such as Junona, Špička, Kri-Kri, etc., she wrote amusing vignettes about the aged bourgeois morality. She criticised the society of the day most mercilessly, particularly focusing on stereotypes about the role of women therein. These articles are important because of their scope and because of the acuity and depth of the author’s thinking. When she wrote poems about the emotions of women, Lūcija Zamaiča was never shy. The 1931 poetry collection Smuggling of Love was dubbed by critics as a book in which the smuggled thing was not love, but instead revolution and pornography. Lūcija loved to annoy bourgeois people with her articles, as well as her behaviour and appearance. She was a beautiful woman with bright red hair, and at public events she often turned up in courageous and revealing outfits.

Lūcija Zamaiča was never a member of the Communist Party, but she learned about leftist ideas early in life. Among her friends was the writer and activist Linards Laicēns, and after she divorced her husband, she became close to another writer and activist, Jūlijs Lācis. During the 1930s, the poet was active in the underground movement of leftists. Despite this, Zamaiča never tried to partner with the new regime when the Soviet occupation began. She never joined the Soviet Latvian Writers’ Union, though that would have afforded her a pension. The poet was supported by her closest friends, including the actress Anta Klints and the artist Aleksandra Beļcova.

During the World War II, Lūcija Zamaiča was put in prison. Many of the unpublished texts that remained in her flat disappeared. The poet never recovered from this fact.

Lūcija Zamaiča met Aleksandra Beļcova already in the mid-1920s, but they became close friends later – in the 1930s. In this period, Beļcova drew and painted countless portraits of her friend Lūcija. Visitors to this exhibition will see several of these artworks, as well as the poet’s manuscripts, notebooks of poems, private items, photographs, documents, and correspondence.

Kārlis Vērdiņš has written a special essay about the work of Lūcija Zamaiča for the exhibition, and it will also be available there.