Lunch with a photographer who won’t forget, and won’t keep quiet 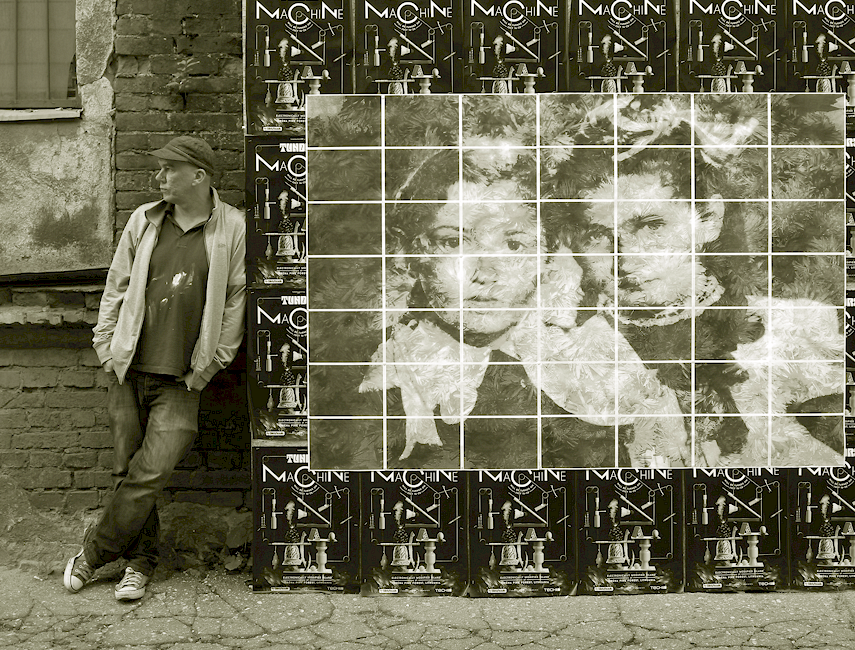 BACK TO THE PAST: Schofield raises provocative questions that many Lithuanians don’t want asked.

VILNIUS - “Before we get started, I just want to say that this is a human rights issue more than anything. Go on, have a chip! They’re good!” I’m sat outside Cozy, a small cafe on Dominikonu Gatve in Vilnius, having lunch with the Kaunas-based British artist, Richard Schofield.

Schofield was a recent winner of the ‘Cultural Leap’ category in a photo competition organised by the Lithuanian Jewish (Litvak) community, and in 2014 he was a nominee for the Sugihara Foundation Citizen of Tolerance Award. I discuss with my compatriot his recent projects, which range from a PhD to the formation of a non-governmental organisation, which will showcase his photographic work about life in the Litvak community in Kaunas after the Holocaust.

Entitled the International Centre for Litvak Photography in May 2015, Schofield set-up the NGO to shed light on post-Holocaust life of the Lithuanian Jewish community. He tells the Baltic Times that he feels “frustrated” with the Lithuanian state for its behaviour in this field, especially its reluctance to address this “uncomfortable period in its history.”

As he swipes another chip, he says, “oh, and it’s completely pure self-interest. I wanted to find out more about the subject for myself. I also knew it’d piss a few people off,” he concludes with a raspy laugh.
Somewhat surprisingly, however, Schofield is not Jewish and the story behind the NGO began 11 years ago, in Visaginas — a Lithuanian town built during the Soviet era with one purpose: to house the workers of the nuclear power plant built there during the 1970s.

In Visaginas, Schofield experienced something of a revelation. Before that, however, it’s worth noting the town has a largely Russian population — the result of a large number having to be resettled from the Russian Soviet Republic to manage the power plant, due to a lack of local knowledge in the Lithuanian SSR.

“So, if we go back 11 years, I was visiting some friends in Visaginas,” he begins. “We were having tea and biscuits, you know, the usual Eastern European thing, and they got the family photo album out.” Interestingly, the photos were not of Litvaks, but of ordinary Soviet citizens - something Schofield admits he’d never seen before, despite having lived in Lithuania since 2001.

“Those pictures were the first I ever saw of what the Soviet Union actually looked like,” he revealed. If you go to Google and search ‘Life In The USSR’, it’s happy people driving tractors, men opening hydroelectric power plants, happy people on buses, Pioneers wearing red scarves - you know, all that kind of shit. There was nothing about what was actually going on for the vast majority.”

The images led to the artist beginning to collect snapshots of Soviet-era family life, which resulted in two photo-exhibits in the United Kingdom in 2011 and 2012.

Where, then, did the Jewish aspect come in?

“Well, in parallel to this, I used to work as a journalist in Lithuania, too,” explains Schofield. “I’ve always been immersed in Lithuanian history, and the fact that how the Jewish question is represented in a slightly troublesome way, is really interesting. After the UK exhibitions, that was when I decided to do a PhD, and where you have to be really forensic and focus on specifics, that allowed me to bring it all together - Jewish history, the photography and Soviet family life. That was when I started to work on family photography within the Litvak community during the Soviet period after the Holocaust in Kaunas.”

It becomes evident that anecdotes and in-depth answers are part of Schofield’s repertoire; something I’m happy to listen to. He talks with enthusiasm, knowledge and an almost Viz Comic-style sense of humour. He recounts another story, this time about the title of his PhD project - The Fourth Room.

“I went to an exhibition in the middle of Kaunas about a year and a half ago, and it was called ‘The Jews of Kaunas in Historical Sources,’” he explains, lighting a cigarette, then offering me one. Professional courtesy in Lithuania.
“There were three rooms,” Schofield continues. “The first represented the Jews in Lithuania’s first independence from Russia in 1918, the second room was the interwar period, and the third was the Holocaust.

In a nod to a man who clearly knows the former Soviet bloc - Schofield also travelled around Russia in 2010-11 for a photographic project - he jokes “as you know, in all former communist countries, there’s a large, middle aged lady sitting on a chair somewhere, and I asked ‘where’s the fourth room?’ She said ‘there isn’t one.’”
However, Schofield holds the opinion that there should be - as a number of Lithuanian Jews did survive the Holocaust - but he feels it’s a completely unknown chapter of Lithuanian history, and a completely paradoxical one as well.

“Dov Levin put it really well,” he explains. “He said “the Nazis took the bodies, but the Soviets took the souls.” It’s really complicated and not many people have thought about it before. The Red Army saved the few remaining Jews after the Nazis left, but the Soviet system subjected them to years of misery and persecution. While I’ve come under a lot of criticism, I myself am criticising the Soviet system with my pictures, so maybe people should be happy because the USSR is reviled here?”
And the criticism he has faced for his NGO and his artwork is something Schofield is conscious of, but it appears that he almost welcomes it.

“Well, it’d be a lie if I said the project wasn’t politically motivated, as well as culturally and creatively, so it’s a bloody good question,” he admits. “I think art should be political ... I don’t try to make trouble with what I do, I just find out interesting things from the past, and try to do creative things with them.

“In terms of criticism - well, yeah, I’ve had a lot from both the Lithuanian and Litvak communities,” he reveals. In doing so, he begins to lay out the root of problem, and believes the education system in the Soviet Union is the cause. “You can quote me on this, but what the USSR did to young peoples’ minds was a terrible thing, and I believe the criticisms stem from that. It’s pointless talking to a 40 year-old in Lithuania about this topic.”

Interestingly, Schofield points out the Jewish cemetery in Kaunas is a popular location for local drinkers. As part of his project, the artist collects the empty bottles, cleans them, and fills them with images of local Litvak life.
Since starting the project, Schofield has thrown the bottles into one reservoir and one river, and while not entirely sure where he’s going with the project, he hopes firstly they’ll be found by someone related to Litvak culture, but secondly the idea will shake up the Soviet ideal of art having to be pure for the state, and not being “anything naughty or dirty.”

“It ties into that Soviet idea that things have to be nice, and things can be neither enigmatic nor mysterious,” he says. “It’s come under criticism from Litvaks and non-Jews, but on the other hand, I’ve also had a lot of support from both groups. You work it out on a graph - work out how long a person lived in the USSR for, and correlate that to their liberal ideals. I mean, most of the Litvaks I know in Kaunas are lovely people, but have very strange ideas about how art should be and how things should be remembered.”

And to wrap up, how things should be remembered is something Schofield is aiming his NGO. “To be honest, remembering the Litvaks properly is all I want for the NGO. That said, come back to me in a year, and I’ll be able to give you a better answer,” he laughs.

He’s already working with a number of young people, as he believes they are the only way of bringing awareness to the Litvak cause. He refers to their latest project - a large image of around 40 sheets of A4 paper, featuring two Jewish girls (see feature image) in the post-Holocaust period, surrounded by dandelions and also with dandelions in their hair. Why? Their mother used to eat dandelions in the Kaunas Ghetto.

Schofield’s passion for imparting his knowledge of the subject onto Lithuania’s bright young things, and help the country grapple with this “black hole” in its history becomes evident becomes evident as he refers back to the image of the two girls, and points to how the creation of the large-scale images are a method of passive learning.

“It’s a really interesting way of teaching people history without them being aware it’s happening. There’s a young Lithuanian teacher I know in Kaunas. He teaches English, and all of the books he uses are to do with Jewish history,” he outlines. “The kids don’t really know they’re learning English, but this idea of standing up in front of people and saying “I’m gonna tell you a terrible story” will bore them senseless. It’s about getting them engaged and then dropping the bomb, he grins. “When I give talks, I always say “I’m not a priest, I’m a photographer” because most people still live with that idea if someone from a position of higher education or arts says something, it’s a fact. It’s a very Soviet thing to not want to make mistakes and try and be perfect.”

We wind down the conversation, and Schofield concludes with further thoughts on the future of the NGO, and working with the youngsters.
“We’re hoping to get a building to create museum and display exhibits and workshops, which will help more young people involved.
“I’ve found when working with these huge images, is that I do a quick demo on how to put them together.

Where they’re photographs, I cut them up already, and then the kids slowly start working, then the questions start. I don’t have to work particularly hard…”