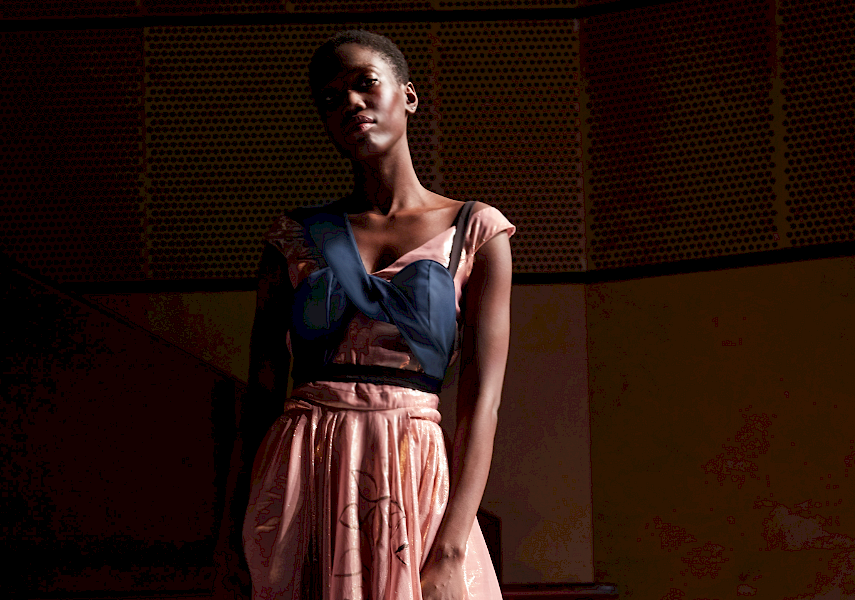 Creativity, innovation, business and inclusiveness are at the heart of British fashion, noted Dame Natalie Massenet, Chairman of the British Fashion Council at the opening ceremony of London Fashion Week (LFW), which The Baltic Times attended, along with British Fashion industry luminaries.

The London Fashion Week Festival is about shows, talks, styling, shopping and from next season, it will grow to a city-wide celebration of the fashion industry.
“We understand from our research, that fashion has better engagement than football. It is not surprising, as we have shows every 30 minutes during London Fashion Week, we have our street style obsession that outplays any other event, plus opinions and content views from all over the world,”   said Caroline Rush CBE, Chief Executive of the British Fashion Council.

Einer, originally from Tallinn, Estonia moved to London to study at the prestigious fashion courses at Central Saint Martins and the University of Westminster. During her studies, she completed internships with internationally noted designers Mary Katrantzou and Alexander McQueen, before moving to Paris upon graduation to assist at Balmain for a year, where she continued to develop her craft. Establishing her label upon her return to London, the Roberta Einer brand is now in its third season creating experimental, luxury womenswear, which focuses on textiles and works with traditional couture techniques. Playful embellishments and hand-embroidery decorate specially sourced fabrics to create her daring more-is-more, feminine aesthetic.

“ I love to see presentations instead of shows. They give you the opportunity to admire the collection at your own pace and just stare, and stare as long as you need at the lovely details, “ said Piret Puppart from Estonia.  Puppart, who is  Head of the Fashion Department at the Estonian Academy of Arts, has amongst an eventful fashion career spanning 11 years, designed the Estonian Olympic team’s uniforms (Rio 2016, and Sochi 2014), and for the Latvian National team for the 2008 Beijing Olympic games.

“Roberta has said it herself, that it would be a pity to let such elaborate works trot by you within a second on a catwalk, and I agree with her. I like to get carried away into Roberta’s dreamy world of illustrations embroidered on her clothes - I find it a privilege she gives to her guests.”
“Everybody can feel equal, there is no front-row/back-row fuzz. I knew there was embroidery to expect, so the amount of it did not surprise me, but I loved the fly motive she had inserted in her story looking sweet and slightly irritating at the same time. She was also very masterful in using glossy fabrics, and yet kept it casual.”
“Estonian design has become much more visible. On one side internationally, but on the other side locally. I feel support from the government and from Estonian society on the other side. The immense rise in numbers of professional studios, design shops and design markets speaks for itself.”

‘’And there is so much potential in the young. Therefore, I am very happy that this year the annual fashion show for the young and conceptual designers-- ERKI Fashion Show 2017 is celebrating its 30th anniversary and is celebrating it big,’’ Puppart said.

Puppart and a group of Estonian fashion students had the opportunity of visiting  Roberta Einer in her London studio.
“Meeting Roberta is always a pleasure. She is a very captivating talker and down-to-earth person. She is very open about her business and willing to share details that could come in handy when setting up your own label,” said Puppart.
“She also does not hide the sweat and hard work behind the collection, because towards the end of presenting a collection, it is not only about all-nighters, but rather “all-weekers.”

There are several Estonians studying fashion or disciplines linked to it, for example: buying, visual merchandising, etc. in London.  But Puppart finds Estonia to be an intriguing place to study at the moment.
‘”It’s about the past heritage we have here - a bold mixture of Nordic influences and post-soviet elements, that mould our designers,” said Puppart.

“From the emerging designers side, I would point out Mariliis Niine with her playfulness and Evgeniya Dolgopolova with her unexpected twists on femininity. Speaking about established designers, I am always keeping my eyes on Lilli Jahilo’s eveningwear and minimalistic elegance (especially now, as she is doing fabulously with her designs in Dubai), and Marit Ilison, who has taken Europe by storm with her coats made out of old soviet blankets.”
The theme of Latvian designer Fyodor Pokorny’s label Fyodor Golan show was “Never Just A Little” and featured sprayed colour prints inspired by the large-scale artworks of Katharina Grosse.

“We were fascinated by the way she expressively uses bold colours within a space, consuming them, spraying raw rainbows through and over everything in her way,” Fyodor said.
Graphic shapes printed and stitched onto garments brought a necessary contrast to the camouflage, leopard and checked textiles, and provided a sense of urgency and active living. Silhouettes were constructed to be protective, yet feminine and soft.

Known for creatively manipulating materials through ground-breaking technology, Fyodor Golan’s collaboration with 3M and the company’s Post-it products, also brought to life the unified mission to apply design and creativity in dynamic ways, to empower the freedom of self-expression.

“The Post-it products have come to express everyday art forms and an element  of universal self-expression. The Post-it Notes iconic colours and design purity have been essential to our collections over the last 5 years,” Fyodor said.
“Moveable printed and  embossed leather Post-it Note shapes bring that freedom of expression to the garments through simple messages and reminders. We wanted to create interchangeable, individual uniform-like quality to the garments. Designing limited edition FG Post-it Notes, printed 360 at a perfect cube, and connected the two worlds.”
Both Fyodor and Golan grew up with The Powerpuff Girls and both remain huge fans. For the designers, these three characters empower one to be oneself.

“They encompass strength, power to stand up for yourself against all odds, and at the same time be overly cute. Designing with the girls in mind was really liberating and felt naturally relevant. We love the iconic qualities of simplicity of line, colour and mood, and translated this into prints and embroideries.     And starring in our own Powerpuff Girls cartoon was a dream come true,” Fyodor said.

Supporting talent to develop sustainable businesses is a must, and encouraging creatives to be creative entrepreneurs, and to innovate, is a must for future success.
“I encourage designers to be bold in design and in business,” Dame Natalie Massenet said.

And boldness is what the Baltic designers achieved through their drive and expressive approaches.  Fyodor Golan, through their cutting-edge collection of playful undertones, with experimental cuts focused on bold colours and digital-like textures, and Roberta Einer who showed  off her textile ingenuity through her collaboration with Swarovski: silk-satin braids embroidered upon a silk base with crystal beads woven through. A heavyweight forest green coat featured a fully hand-embroidered crystal back yoke, incorporating raffia, heavy wool yarn and raised crystal surface area through wire. Playing into the graphic and bold nature of her collection were prints, pleating and 3-D fabric manipulation techniques, which were all new this season.