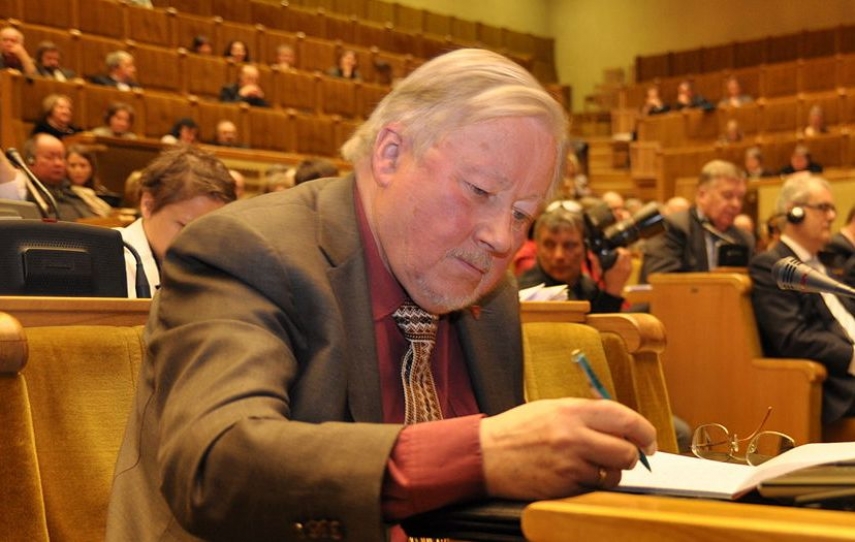 VILNIUS – Lithuania's law enforcement institutions are not free in their investigation of the January 13 case as some force is restricting them, says Vytautas Landsbergis, former speaker of Lithuania's Supreme Council-Reconstitutent Seimas.

"There's some prejudice, and probably constraints as well, restrictions on what one mustn't investigate," Landsbergis said during the presentation of his new book on the January 13 events at Martynas Mazvydas National Library of Lithuania on Tuesday.

He pointed out to the fact that Lithuanian law enforcement avoids for some reason raising the issue of former Soviet leader Mikhail Gorbachev's responsibility for the 1991 massacre in Vilnius. Gorbachev has not even been questioned as part of the investigation, let alone charged or put on trial.

What is restricting Lithuania's law enforcement is unclear, the first actual post-independence leader in Lithuania said.

"Where's that force? I believe it's the same old force. During this case, Lithuanian law enforcement has the chance come out into freedom but it's not free as something constraints it. Maybe some day these mechanisms will be revealed," Landsbergis said, calling his new book a little stone thrown at law enforcement's window.

"My weapon is to provide real things that are more difficult or impossible to enlace in lies," Landsbergis said.

His book contains various documents from 1991, conversation transcripts, and his later given comments about the January 13 case.

According to Landsbergis, law enforcement has been acting strangely not only regarding the January 13 case, but also regarding the Medininkai case. In his words, soon after regaining consciousness at the Medininkai border checkpoint after the massacre, injured customs officer Tomas Sernas testified that Vilnius OMON commander Boleslav Makutynovich was involved in the crime.

"(…) but that man has never been investigated as it was allegedly concluded that the Vilnius OMON was not involved and that the Riga OMON came," Landsbergis said.

Vilnius Regional Court has been hearing the January 13 case for the past three years, in what is considered one of the largest-scale law enforcement cases in the history of post-independence Lithuania. The ruling is due in February.

Over 60 former Soviet officers have been charged with crimes against humanity and war crimes in the January 13th case, with the majority of them standing trial in absentia as the majority of the defendants live in Russia and Belarus and two countries reject Lithuania's legal assistance requests.

Vilnius regional Court once decided to call Gorbachev a witness in the trial and several subpoenas were sent out but Russia refused to hand them in to the former Soviet leader.