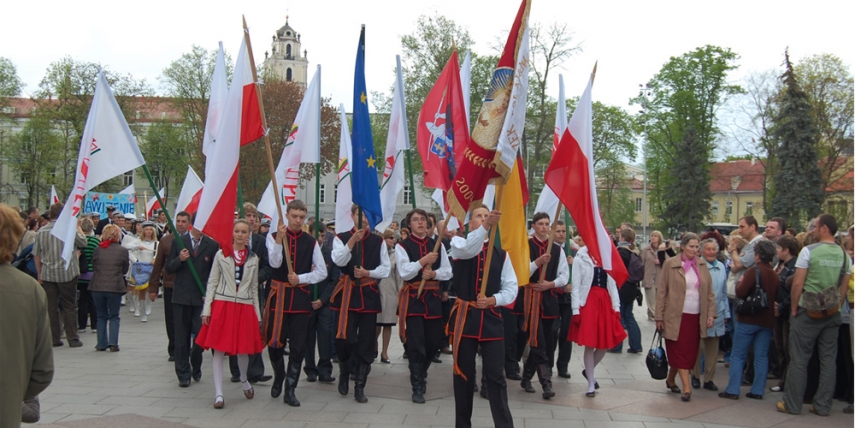 Polish minority in Lithuania marching in Vilnius, May 2008 [Marcin Bialek]

VILNIUS - Vilnius is prepared to protect Warsaw, Lithuanian diplomats affirmed in a message in the Polish media on Tuesday following a Polish official’s comment that it would be difficult to convince Poland's troops to care about the Baltics’ safety due to national minority conflicts within those countries.

"Vilnius is indeed ready to defend Warsaw. In the opposite case, NATO would lose its credibility," Rolandas Kacinskas, political director at the Lithuanian Foreign Ministry, said in Poland's daily newspaper Rzeczpospolita.

The diplomat said he is confident in Poland's commitment to the NATO principle of collective defense, stressing that the neighbouring nations have previously collaborated when faced with geopolitical challenges.

Poland's former defense minister Jan Parys, director of the Polish foreign minister's political cabinet, noted during a discussion at the Vytautas Magnus University in Kaunas earlier this month that "the situation of Polish minorities in Lithuania is worse than that in Belarus."

Lithuanian diplomats have dismissed these comments as offensive, as have members of the Polish media who have urged for an apology to be issued to Lithuania.

Speaking to Rzeczpospolita, Kacinskas said he could not dismiss “certain problems” in the area of national minority education but also pointed out indicators of Lithuania's efforts to manage the education of the Polish-speaking minority.

Kacinskas underscored that the Joachim Lelewel School for Polish-speakers is to be renovated at a cost of over 2 million euros to become one of the most advanced schools in Lithuania.

"You must see that Lithuania features the world's biggest network of Polish-language schools in Lithuania; our country provides unique conditions for receiving Polish-language education from kindergarten to university," noted the diplomat.

He invited Polish officials to visit Lithuania to talk over the educational hurdles faced by Poles in Lithuania and Lithuanians in Poland.

The most recent census in 2011 indicates that 200,000 Poles reside in Lithuania, accounting for 6.6 per cent of the nation’s population. Polish administration has long condemned Lithuania over the limited rights of its national minority.