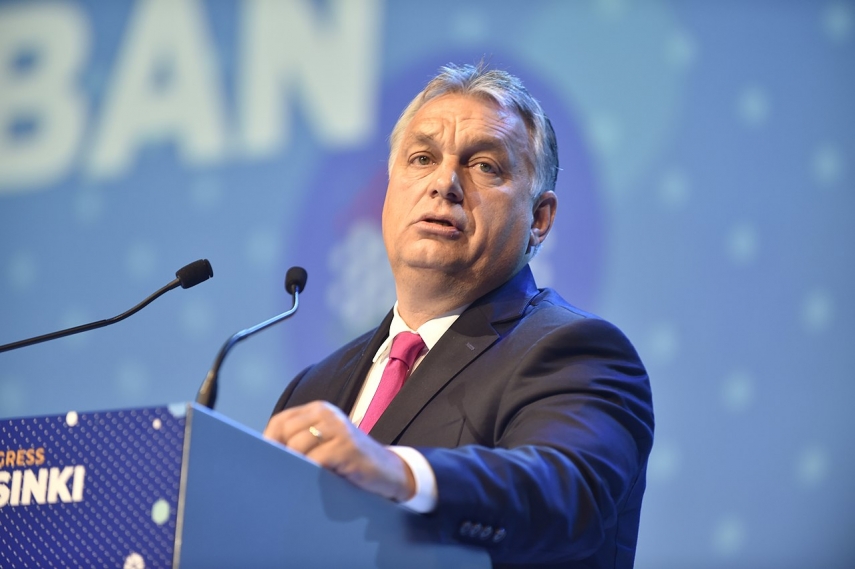 The leader of the conservative Homeland Union–Lithuanian Christian Democrats said this during a debate in Brussels on Wednesday when European center-right parties' leaders decided to suspend Hungary's ruling Fidesz party from the European People's Party (EPP).

Landsbergis said he was "left dumbfounded" by Orban's statements that Fidesz and the Homeland Union had long standing disagreements on Christian values and migration.

"Maybe there are some new, unknown Christian values, preached by some other Pope, other than Pope Francis. But I am afraid I am not aware of those and I do not know people in my party who could be accused as the ones disagreeing with them," the Lithuanian politician said.

"King Henry VIII once proclaimed himself a new head of church and overseer of new set of values that he was keen on defending. But I doubt that you, Mr. Orban, would find it flattering to be seen as a defender of a certain kind of the 'new religion'," he added with irony.

"Christian love, compassion for fellow beings, constant search for truth and virtue -- these, I believe, are the values upon which the EPP is built, upon which the EU is built, and I don't think we should have any disagreement on that. However, if you would try to justify that lies, upon which your political empire seems to be built, are the values that you are defending -- well then, we are in a disagreement," the conservatives’ leader said.

"Migration is a hard topic, I know. But if I'm reading Pope Francis correctly, we ought to help those in need, or at least help them to help themselves," he added.

Fidesz has been criticized for limiting the freedom of courts, the media and the opposition freedoms for years. Last month, Hungary angered many in the EU by launching a controversial poster campaign accusing European Commission President Jean-Claude Juncker of promoting mass migration.

The posters depicted Juncker, whose party is an EPP member, as a puppet manipulated by Hungarian-American billionaire philanthropist George Soros.

Landsbergis said the move "might be just a blatant campaign" as Orban "needs enemies" to win elections.

"But maybe there is a more sinister plan at hand - creating a non-liberal European order from within the EPP," he said.

"Mr. Orban is starting to see the followers emerging in other countries. My country as well. Populist illiberal parties and politicians are springing up with the hopeful promise, that you see -- the EPP and the EU are OK with us spreading fake news, distorting rule of law and God knows whether we will be stopped at all. Golden age for populists of all sorts," he said.

"But I'm not OK with that. My promise to my voters is that Lithuania and my party will be the ones building and strengthening Europe, not dismantling it. So, I won't stand idly and watch."