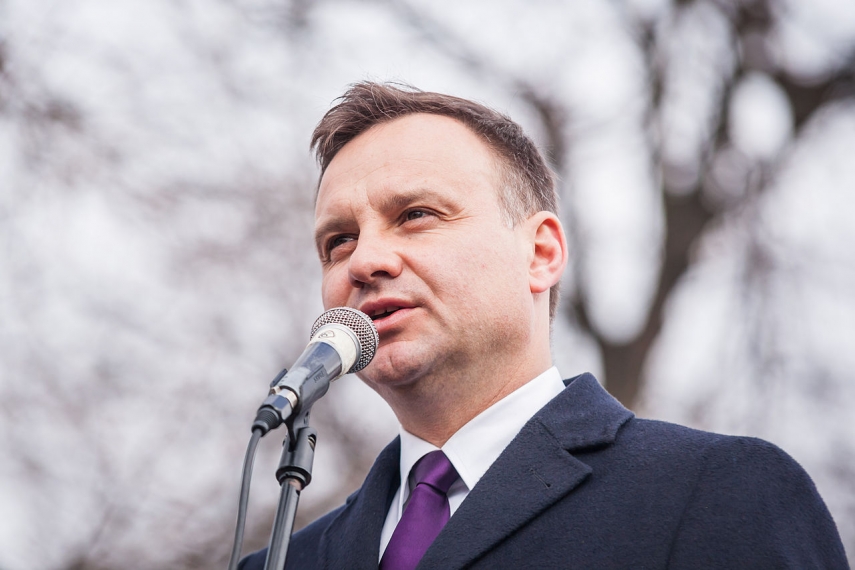 WARSAW – Lithuanian President Dalia Grybauskaite and Polish President Andrzej Duda have agreed in Warsaw on Thursday to coordinate their countries' positions on security and defense issues and step up military cooperation.

Security and defense issues were in focus during the Lithuanian president's last state visit to Warsaw.

The two presidents signed a joint declaration, and Lithuanian Minister of National Defense Raimundas Karoblis signed two agreements on the exchange of air surveillance radar data and on the Lithuanian-Polish brigade affiliation.

FOCUS ON THE SUWALKI CORRIDOR

The Lithuanian and Polish presidents pledged to enhance cooperation between the Lithuanian and the Polish Armed Forces, in particular by formalization of ties between forces along the Suwalki Corridor in terms of adequate planning and training.

The Suwalki Corridor is an around 100km-wide stretch between Lithuania and Poland, and bordering Russia's Kaliningrad region in the west and Belarus in the east.

The presidents also pledged to work together to ensure a continuous US military presence in Europe, including "a robust long-term commitment of US force presence in the region."

The document also stressed the need and determination to facilitate military mobility of allied forces by simplifying procedures and expanding and adapting the cross-border infrastructure for military use, and also continue providing political support and military assistance to Ukraine.

The declaration also contains a commitment to establish a Lithuanian-Polish defense minister council which would gather at least once a year to seek the implementation of the goals defined in the presidential declaration.

After signing agreements on the exchange of air surveillance rada data and on the Lithuanian-Polish brigade affiliation, Lithuanian Minister of National Defense Raimundas Karoblis told journalists that bilateral military cooperation is being taken to another level.

According to the minister, the Baltic states and Poland are part of the same defense region, therefore, it was agreed that one Lithuanian brigade and one Polish brigade would be affiliated with the NATO division headquarters in Poland.

"This mechanism has been created taking into account the existing NATO situation, getting back to the fact that we are facing once again a conventional threat from the East, and NATO needs to adapt once again to territorial defense, and the creation of a division-level command and control system is one of those mechanisms," Karoblis said.

On Friday, the Lithuanian president is scheduled to travel to Lublin to visit the headquarters of the Lithuanian-Polish-Ukrainian brigade, LITPOLUKRBRIG, and commemorate the 450th anniversary of the Union of Lublin.

The visit to Poland is Grybauskaite's last foreign state visit before her presidential term expires. On Thursday, the Lithuanian and Polish presidents exchanged the highest state decorations.