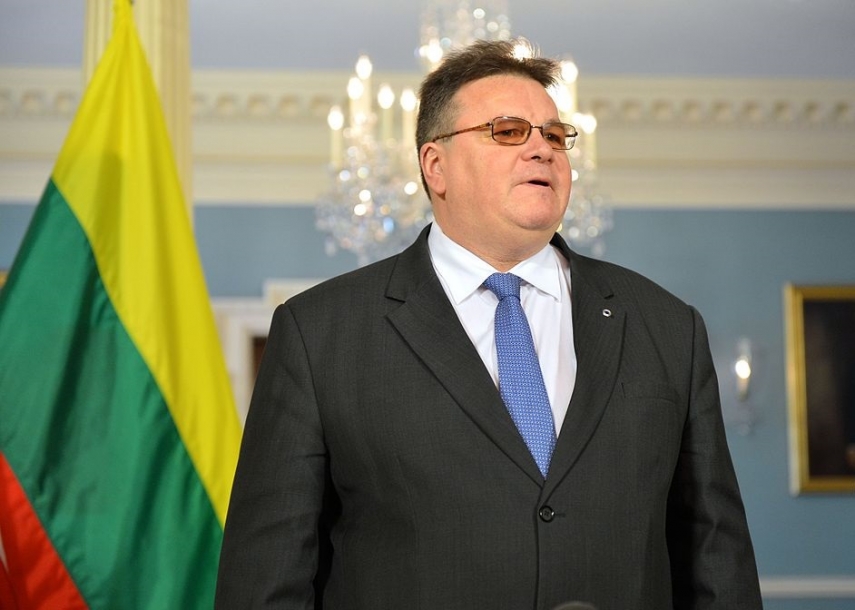 VILNIUS - Lithuania will not tolerate attempts to rewrite history and reverse the roles of victims and executioners, Foreign Minister Linas Linkevicius said on Monday.

"The Russian ministry's official spokeswoman has announced her assessment, which is a message to the world. We are convinced we can't ignore it," Linkevicius told BNS by phone from Yerevan.

"This is our national hero, a man who symbolizes our resistance fight, and it's unacceptable to make unsubstantiated accusations against him," he said.

The minister commented on his ministry's decision to hand a note of protest to Russia over its officials' statements about Lithuania's post-war anti-Soviet armed resistance hero Adolfas Ramanauskas-Vanagas, whose remains were buried in a state funeral last Saturday.

Lithuania had "to voice its protest to the Russian side and, at the same time, send its message that this is unacceptable toward Ramanauskas-Vanagas and that we won't tolerate this in the future either," Linkevicius said.

"It seems that efforts to rewrite history and reverse the roles of the victim and the executioner are becoming a common practice in present-day events, but if someone finds it a norm, this won't be tolerated on our part," he added.

The Lithuanian Foreign Ministry earlier on the day summoned Russia's ambassador Alexander Udaltsov to hand him a note of "strong protest" over the Russian Foreign Ministry's "false" statement about Ramanauskas-Vanagas on the eve of his funeral.

"Particularly cynical is the fact that the grave of Ramanauskas, who is to blame for the deaths of many civilians, will be located close to the gravesite of over 5,000 Soviet soldiers who died while liberating Vilnius from the Nazis," she said at a briefing.

Ramanauskas-Vanagas, the commander of the Dzukija partisan region in southern Lithuania, was among the partisan leaders who signed the Union of Lithuanian Freedom Fighters' Declaration in 1949. He was appointed commander-in-chief of Lithuania's defense forces in the same year.

After several years in hiding, Ramanauskas-Vanagas was arrested and brutally tortured by the Soviets in 1956 and executed a year later.

The guerrilla war in the Baltic states started after Soviet troops in the summer of 1944 pushed Nazi forces out of the countries and occupied them for the second time. A period of Soviet repression, terror and forced mobilization to the Soviet Army began immediately after the reoccupation.

The armed resistance lasted until 1953. Partisans' goal was achieved when Lithuania regained independence in 1990.