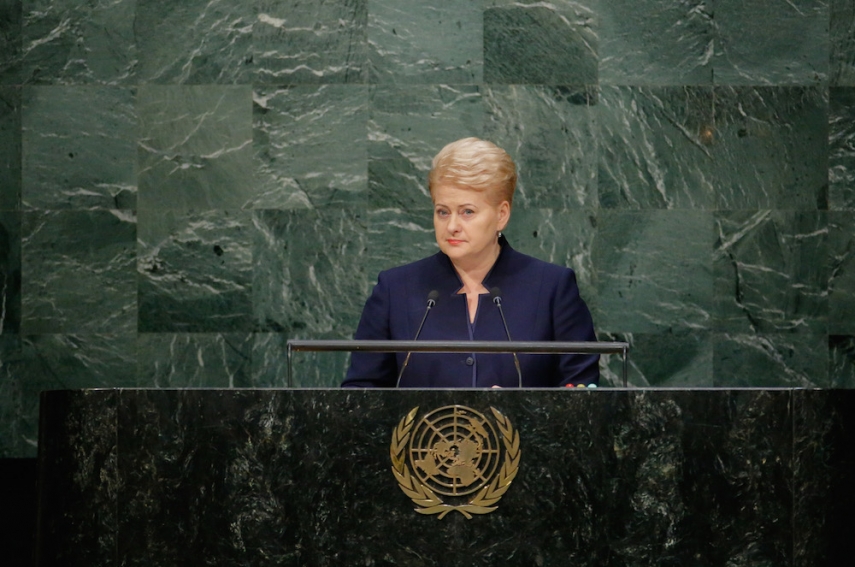 Lithuania at the UN [Image: LRP.lt]

Lithuania, as part of the United Nations Security Council, voted in favour of using “all necessary measures” to “destroy” the “safe haven” of Islamic State in Syria and Iraq.

The 15 members of the council, which includes Lithuania as a temporary member for 2015, voted unanimously to adopt the resolution in Brussels.

It called on “all countries that can do” to get involved saying the group intended to mount further terrorist attacks and had the capability to do so.

The resolution, named 2249, said: “Member States that have the capacity to do so to take all necessary measures, in compliance with international law, in particular international human rights, refugee and humanitarian law”.

The council called ISIL “a global and unprecedented threat to international peace and security”.

The resolution does not provide any legal basis for military action. It was put forward by France, a permanent member of the council, after the ISIL organised terrorist attacks that killed 130 people in Paris on Friday, November 13.

A statement released by the council after the vote said: “By its violent extremist ideology, its terrorist acts, its continued gross systematic and widespread attacks directed against civilians, abuses of human rights and violations of international humanitarian law, including those driven on religious or ethnic ground, its eradication of cultural heritage and trafficking of cultural property [ISIL constitutes] a global and unprecedented threat to international peace and security.”

It also called on member states to step up the efforts to block the flow of foreign fighters going to Syria and Iraq.

They also condemned the attacks that took place in Tunisia, Turkey and Lebanon and the downing of the Russian plane in Egypt.

A statement released by Lithuania’s  permanent representative to the UN, Raimonda Murmokaite said she welcomed the “unanimous adoption of this resolution”.

In a letter to the leader of the Security Council, she said: ““We shall not live in fear” was the proud and heart-rending response of Parisians in the midst of last week’s tragedy. And indeed, we cannot, we must not live in to fear but act with the full force of conviction against the evil that Dae’sh represents.”

She went on to say: “The evolving nature and intensity of the threat of terrorism and violent extremism put existing counter-terroism measure to unprecedented test.

“While primitively barbaric and brutal, today’s terrorists are outpacing and out-high-teching us. We find ourselves increasingly running against and behind time.

“There can therefore be no room for complacency or business as usual in our responses.”
China, Russia, France, the United Kingdom and the USA are the five permanent members of the Security Council. While Angola, Chad, Chile, Jordan, Lithuania, Malaysia, New Zealand, Nigeria, Spain and Venezuela make up the 10 non-permanent members.