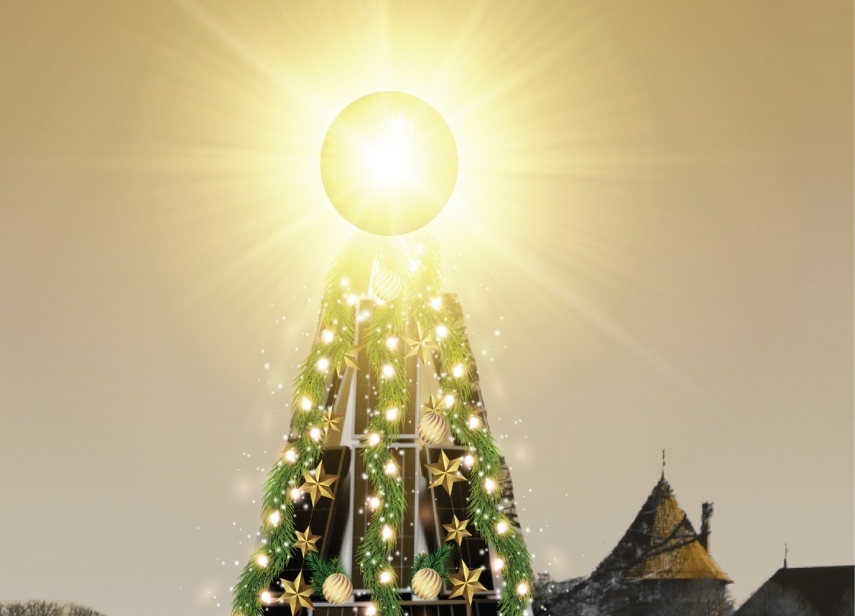 Photo: Trakai, Lithuania’s historic town with a glorious past, has become known throughout Lithuania during the festive season in a different way – for its self-sufficient electric Christmas tree

Trakai is Lithuania’s historic town with a glorious past, famous for its unique blend of natural, cultural and architectural landscapes. Visitors are attracted not only by its material, but also by its spiritual heritage. In 2022, the famed town celebrated the 700th anniversary of its founding. However, during the festive period of Christmas and New Year, Trakai became known throughout Lithuania in a different way – for its self-sufficient electric Christmas tree. The Baltic Times Magazine spoke to the mayor of Trakai, Andrius Satevicius (Šatevičius).

Trakai has become the first municipality in Lithuania to use solar panels to decorate its Christmas tree - the tree will provide its own energy. Who is the author of this idea?

There has been a lot of discussion about the energy crisis and energy saving during the festive season, just in time to see a cool idea posted on social media by journalist Daiva Zeimyte-Biliene, who suggested that this year's Christmas tree could be decorated with solar modules that would not only produce energy, but also send an important message to the world.  Trakai District Municipality decided that there would certainly be a place for such a modern tree in a city celebrating its 700th anniversary and which is not afraid of change -.in a leisure space installed on the shores of Lake Galve.

Did you ask the experts whether this idea was easy to implement? What advice did you receive?

Energy professionals showed interest in the project, and there were even people willing and able to help make it happen. And once we were convinced that the idea could become a reality, the work began. The Christmas tree resembled the green tree that adorns the city every year, but this time it was much more modern. It used a metal structure with the equipment needed to store the electricity generated by the solar modules inside. The brackets and the solar modules were mounted on the frame.

We also wanted to make sure that the tools needed to create this tree would be used after the holidays and really benefit the people of our district. We calculated that this tree would be able to power four medium-sized houses, as an 80-100 square metre house needs a solar power plant of around 10 kW, so another idea was born.

Who made such an unconventional Christmas tree for you this year?

This unconventional Christmas tree decorating Trakai is the work of a really large team. As for the technical part of the project, it was necessary to build a strong spruce frame that could withstand the weight of the solar modules. This important and difficult task was undertaken by a local business, Solė LT UAB. The necessary high-quality, modern solar modules were provided by SoliTek, a member of the BOD GROUP of companies.

How much did the Christmas tree cost? Did the municipality pay for its installation? Or did you launch a crowdfunding campaign?

The project was funded by Trakai District Municipality. We are confident that the investment will pay off and create long-term benefits.

And will the solar panels used in it continue to produce energy after the holidays? Where? Maybe on the roofs of public buildings?

These solar panels will continue to generate power for the municipality's institutions after the holidays - kindergartens, a Christmas tree will power four medium-area buildings. But that's not all. Last summer, the Municipal Council approved the project "Acquisition of a share of 1450 kW share of a solar park to meet the needs of public facilities in Trakai District Municipality", which aims to use energy sources (solar, wind) to meet part of the municipality's electricity needs. The electricity generated is expected to be used for street lighting, including in rural areas. The Environmental Project Management Agency of the Ministry of the Environment of the Republic of Lithuania has already approved the application submitted by the Municipal Administration and finances have already been allocated for the project. Procurement documents are currently being prepared for the purchase of a 1450 kW solar park or part of a solar park to meet partial electricity demands of Trakai District Municipality.

The European Commission (EC), together with the Board of the European Mission on Climate Neutral and Smart Cities, has set a target of 100 climate-neutral cities in Europe by 2030 as centres of experimentation and innovation. When does Trakai plan to become a climate neutral city?

It's difficult to say for sure, because a sudden technological breakthrough may change everything. We predict that these 100 cities will be cities with very good opportunities related to renewable energy sources (RES), especially geothermal and wind, or cities in the southern part of the European Union with very good solar energy opportunities.

Trakai is not a large city and has a small population, so the amount of pollution emitted is not significant, and much of it is absorbed by vegetation. It is difficult to make accurate predictions without knowing how much pollution is currently present in Trakai and how much is absorbed. Only a detailed analysis can answer this question.

We are moving towards a safe guess that climate neutrality should be achieved in Trakai around 2035-2040, but we are getting there and we are already seeing great results. Recreational green spaces, green areas, pedestrian and cycling paths for recreation and leisure are constantly increasing throughout Trakai District. However, in some areas, processes are a little slower - for example, heating systems in buildings and transport. However, there is a growing number of electric cars on the streets and the aim is to ensure that the electricity they need is also generated from clean sources. Trakai Buses, UAB little by little is upgrading their vehicles, and on 17 November Trakai residents were delighted not only due to opening of the new bus station building, but also due to the purchase of two electric, zero-emission, zero-carbon  (CO2) ISUZU Novociti Volt buses, which are the first in Lithuania to be bought by Trakai Buses, UAB.

The summer season in Trakai sees an increase in the number of vehicles, including long-distance buses, which probably won't run on clean energy for a long time to come, but solutions are being found in this respect too. Adequate conditions are being created for residents and visitors to use public transport, electric or motorless vehicles, and the procedure of the city's traffic arrangement is also being reviewed. One of the solutions is the Trakai bypass road, which is planned to be built in 2035, as it is foreseen in the long-term strategy of the Ministry of Transport and Communications of the Republic of Lithuania.

What interesting environmental initiatives have been implemented in Trakai during recent years?

Since 2019, new underground and semi-underground container sites have been installed in Trakai District and in the city when implementing part of the project "Development of Municipal Waste Management Infrastructure in Trakai District", financed by the European Union Structural Funds and the Municipality's budget. The project not only improved the environment of the containers compared to the above-ground ones, but also extended the possibilities for sorting and accepting larger volumes of this waste, thanks to the larger capacity of the underground containers (compared to the former above-ground containers). Since 2019, the Trakai district has also been able to sort textiles by installing special containers for textile waste (clothing, footwear, bedding, blankets, curtains, soft (plush, fabric) toys and other textile products).

Trakai District Municipality welcomes Trakai visitors who come by electric cars. The electric cars   are exempted from the local charge for public parking spaces and charging stations are already in place. While seeking to encourage the development of electric watercraft, Trakai District Municipality, at the suggestion of the community, is charging only a symbolic fee for mooring of electric watercraft in the public moorings of Trakai.

The municipality encourages people to arrive in Trakai by train and by public transport - by bus. A water taxi route is available to transport tourists from the railway station to the city centre. There is also an electric scooter sharing platform in Trakai.

How many apartment blocks have been fully renovated in Trakai municipality?

Trakai District Municipality has been very active in the renovation of multi-apartment buildings for three years, with 55 buildings completed, more than 30 multi-apartment buildings currently under design stage, and 10 more applications were received following the launch of a new call for proposals. When evaluating changes (differences) in the renovation of apartment blocks in Lithuanian municipalities for the period of 2020-2021, the municipality of Trakai District ranks 8th among the 60 Lithuanian municipalities.

Trakai is a well-known tourist attraction. Your city has always been green. What makes Trakai worth visiting?

Trakai is a historic town, famous for its unique blend of natural, cultural and architectural landscapes. Visitors are attracted not only by its material heritage, but also by its spiritual heritage. This year the city celebrated the 700th anniversary of its founding. On this special occasion, various events and initiatives were held throughout the year. Also, the year 2022 has been declared as the Year of the Karaites, and Trakai is considered to be the capital of the Karaites, with its spiritual and religious centre - the Kenesa - still functioning, and its customs and traditions still alive.

It is a truly green city, given its impressive natural heritage, but every day it becomes even greener. Trakai District Municipality is developing the European Green Deal ideas and successfully implementing them in the city and throughout the district. This is reflected in the slogan: "(ECO) TRAKAI: ecology, culture, organics."