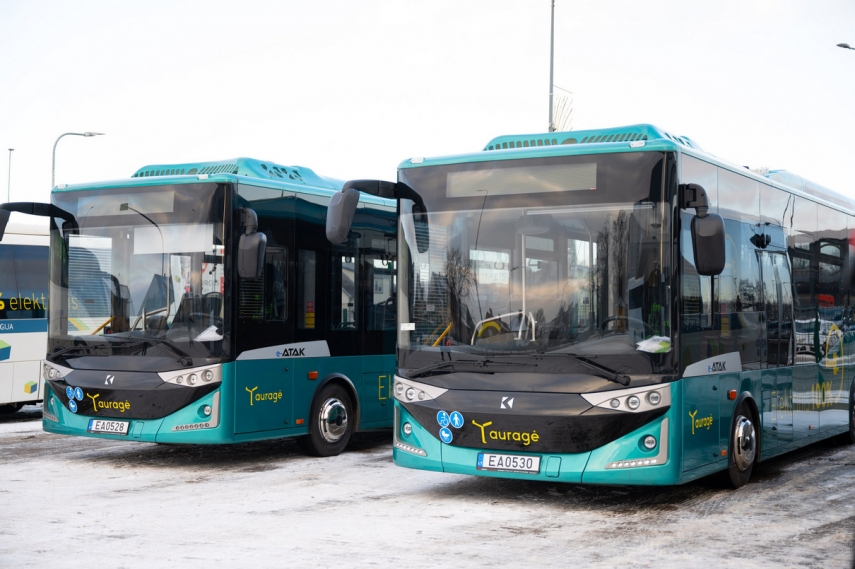 Taurage (Tauragė) is often cited as one of the greenest municipalities in Lithuania. It is home to one of the largest wind farms in the country, and over 95 percent of its heat energy comes from biomass. It has one of the newest bus fleets in Lithuania, with an average age of 6 years, and half of the city's apartment blocks have been renovated.

Sustainable, nature- and environment-friendly initiatives and solutions of Taurage have not gone unnoticed – Taurage is among the 100 European cities in 2022 that will aim to become climate-neutral cities by 2030, as part of the European Commission's mission to make the world's cities climate-neutral and smart by 2030. This will undoubtedly further promote a strategic approach to green and smart city development.

"Taurage will be supported by the European Commission and will become a pilot innovation centre in the fields of renewable energy, decarbonisation of the transport system, urban renewal, modernisation of buildings, water conservation, circular economy and other areas," - says Taurage mayor Dovydas Kaminskas.

Taurage is one of the leaders in renewable energy in the country: almost 100% of Taurage's heat is produced using alternative energy sources - sun, wind and biofuels.

The district has a wind farm, and public buildings are roofed with photovoltaic power plants that supply energy to the buildings. All lighting in the municipality has been upgraded with LED lamps. According to the mayor, this has reduced energy demand by about 50 percent and also saves financial costs.

"A large number of projects have been implemented with EU funding. In addition, all streets in the district have been equipped with cost-effective LED street lighting, which did not cost the municipality a euro. Taurage residents have used the ESCO model, where the project is financed by a private investor, who recovers invested funds over time from the municipality's savings," explained D. Kaminskas.

There are already 25 solar power plants installed on the roofs of public buildings in the city - municipalities, schools, libraries and in neighbourhoods - and more of them will be added.

And in 2023, the municipality will launch yet another major project – installation works of one megawatt (MW) remote solar power plant.  Taurage District Municipality Administration and the Environmental Project Management Agency under the Ministry of Environment have already signed a financing agreement for the project.  The electricity generated by the sun will be used to meet the electricity needs of the Taurage district municipality's Elderships. Most of the electricity will be used to light up all the streets in the district.

"It is planned that by 2025 Taurage District Municipality will use only renewable energy for all public needs. In the district, 99 percent of district heating is produced from biofuel, and during the last heating season, when heat prices in Vilnius were breaking records, heating in Taurage was the cheapest in Lithuania," says mayor Kaminskas.

According to the Mayor, Taurage District Council has authorised the preparation of 2 special plans for the construction of 166 MW wind turbines.

"Therefore, one of the most ambitious goals is to attract 160 million euros of private investment to the district in order to expand the wind farm, which is currently one of the largest in the country, and is also adjacent to Pagegiai municipality. Plans also include the installation of more solar power plants, the purchase of 4 more electric buses, and the expansion of the network of charging stations for electric vehicles. Expanding the network of bicycle paths and increasing the forest cover of the Tauragė district by 4% by 2030," the mayor revealed his plans.

Taurage is already famous in the country for its free public transport and electric buses.

"We have analysed how much revenue the bus fleet receives in subsidies and how much it collects from people travelling on intercity and intra-city and intra-district routes. We have calculated that the latter amount is only around €50,000, i.e. only around 5% of the total amount needed. We decided that it would be socially fair not to collect this money from the frequent travellers with the lowest income and to cover this amount from the municipal budget," the mayor explained to The Baltic Times Magazine.

Public transport in Taurage has not only been made free, but routes have also been upgraded, as well as the infrastructure: public transport stops have been built and refurbished, signboards have been installed, and a website has been created for route planning.

Today, Taurage District has one of the newest bus fleets in Lithuania, and the average age of public transport vehicles in the district is 6 years. The bus fleet has 33 buses powered by internal combustion engines, and by the end of next year Taurage will have a total of 12 electric buses.

"Taurage was the first Lithuanian municipality to buy electric buses with EU support. The last three new Isuzu electric buses were bought for 954,000 euros. Most of this amount (811,000 euros) will be financed by European Union funds," - says the mayor.

The city is also expanding its green infrastructure, with the renovation and construction of new cycling and walking paths.

To encourage residents to switch from their cars to electric vehicles, Tauragė is also developing a network of electric charging stations - until 2024, charging at these stations is free for residents.

"The municipality currently has installed 10 locations (20 access points) + 1 fast charging station has been installed by the Lithuanian Road Administration. By 2030, we plan to expand the network to 60 charging stations - 30 in the city, 30 in the villages," said D. Kaminskas

He said that electric car charging stations will soon appear in the courtyards of apartment buildings.

The aim is also to improve accessibility in areas where there are currently gravel roads, so they are being paved, but opportunities are always being sought to include more planting in the asphalting project. A public campaign has resulted in 8 000 trees being planted in Taurage in 2022.

In the International Transport Innovation Forum 2021, the "Towards Green Transport" awards were granted for sustainable logistics solutions and initiatives. Taurage was named the greenest municipality with the biggest breakthrough in green infrastructure development.

This is just one of the many accolades for Taurage municipality in recent years.

Taurage is also the first in the country to provide free bicycle storage facilities in the yards of apartment blocks. A total of 75 bicycle lockers with eight spaces each have been installed in all of the city's apartment blocks, 235 bicycle racks with a shelter have been set up at all of the city's schools, and there are two public bicycle storage facilities in the city centre.

The STEAM Open Access Centre (Science, Technology, Engineering, Arts and Mathematics Education) has been opened in Taurage with the only Sustainable Development, Green and Alternative Energy Laboratory.

Taurage District Municipality is one of the leading municipalities in the renovation of apartment buildings. There has been an active shift from renovating individual blocks of flats to block renovation. Data from 50 renovated apartment buildings show a three-fold reduction in energy consumption since 2014. Residents have appreciated the fact that upgrading buildings in residential neighbourhoods not only saves money, but also improves the quality of life by raising comfort levels, changing the appearance of neighbourhoods and improving public infrastructure

Taurage is also experiencing a growing number of positive urban developments, with a large number of recreation areas where residents can relax and socialise, and community spirit is encouraged.

"The reality is that by 2050 the whole of the European Union will have to become climate neutral, even though many cities are not resorts - everyone will have to change. Taurage is trying to be an example for other cities, especially small cities that may think they are too small to make a difference. We will do our best, and we will see in the future how we manage to do it," says Kaminskas.

No doubt, he has confidence in himself, in his team and in the city and district community, so the plans are certainly to flesh out and pan out – sooner rather than later.