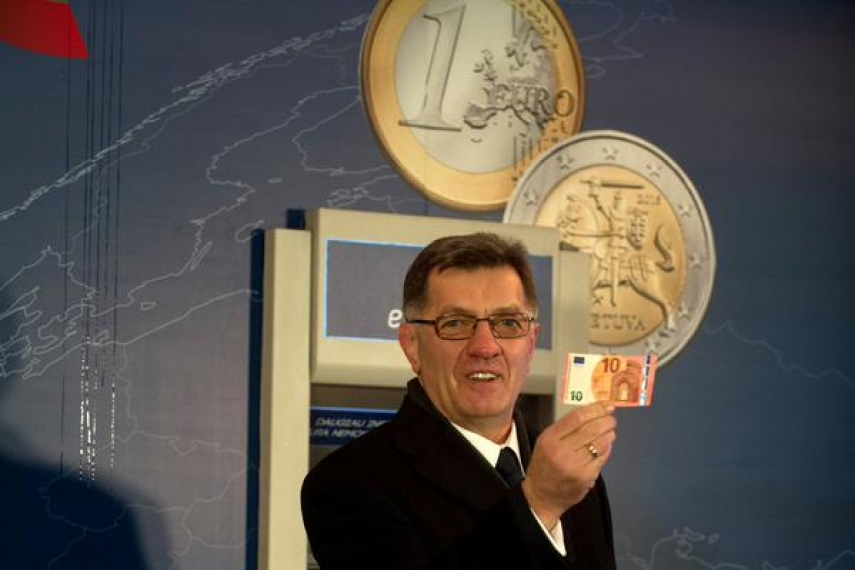 Algirdas Butkevicius, Prime Minister of Lithuania, at the ceremony to mark the country's adoption of the euro in Vilnius

As the clock struck 12 on 1 January 2015 Lithuania officially bid farewell to the litas and adopted the euro.

After a great deal of discussion, uncertainty and waiting, Lithuania has finally fulfilled an objective that it has been pursuing for almost a decade. The goal of introducing the single currency of the European Union was announced when Lithuania joined the EU in 2004. The country had sought to become the first of the Baltic states to adopt the euro in 2007. However, the country stumbled initially as it failed to meet the Maastricht criteria on inflation: its threshold in May 2006 was 2.6 percent, while Lithuania's inflation at the time was at 2.7 percent. As a result, in May 2006, the European Commission gave a negative answer regarding the euro adoption. The European Central Bank (ECB) and the European Council returned the same verdicts.

The introduction of the new currency was delayed due to the global economic crisis. Nonetheless, the idea was never abandoned and preparatory work continued.

Consultations over Lithuania's euro membership began in Brussels in March 2013. The Lithuanian Parliament adopted the Law on the Euro Adoption in April 2014, while the plan for the introduction of the new currency was approved in the summer.

Good news came through from Brussels and Frankfurt in June 2014 - the European Commission and the ECB analysed the latest macroeconomic data and confirmed that Lithuania now met all the Maastricht criteria. In mid-June, Prime Minister Algirdas Butkevicius and Chairman of the Board of the Bank of Lithuania Vitas Vasiliauskas gave a start to minting Lithuanian euro coins. Euro banknotes began arriving in Vilnius and Kaunas from Germany's Central Bank in October.

"Lithuania has been working towards this goal for almost a decade, since the very beginning of its EU membership, by reforming the economy, enhancing the financial system, creating an image of a reliable and disciplined country on the international arena. We will continue our responsible work after becoming members of the Eurozone. We will seek to share our best practice and benefit from the advantages of the Economic and Monetary Union," at the time said Minister of Finance Rimantas Sadzius.

Lithuanians had the opportunity to acquaint themselves with the new currency since 1 December 2014, when the Bank of Lithuania and commercial banks began selling euro coin starter sets. 900,000 starter sets were made available and by the end of December approximately 100,000 were still on sale.

"The demand for starter sets surpassed our expectations. In this case the public was significantly more active than in Latvia [which joined the Eurozone in January 2014], where 40-60 percent of sets were sold, compared to 80-90 percent sold in Lithuania," said Vitas Vasiliauskas, Head of the Bank of Lithuania.

On 1 January 2015 the euro replaced Lithuania's previous currency, the litas; it had been in use since 1993, when Lithuania's independence was restored. It was also the national currency between the wars, from 1922 to 1940. The modern litas banknotes and coins were designed by artists Giedrius Jonaitis, Justas Tolvaisis, Antanas Zukauskas, Rimvydas Bartkus, Rytis Valantinas, Raimundas Minkevicius, Petras Garska, Arvydas Kazdailis, among others. The banknotes featured the portraits of prominent and distinguished Lithuanians.

Honouring the new and the old currencies, the Bank of Lithuania will give every museum in the country two banknotes and coins of the litas and the euro in every denomination.

The euro will become the only legal currency in Lithuania on 16 January. Until then it will still be possible to make payments with the litas, although change will be given in euros.

Including the distributed 900,000 starter kits, currently there are about 0.62 billion euros in circulation in Lithuania, which amounts to almost 28 percent of the total amount of cash in circulation.