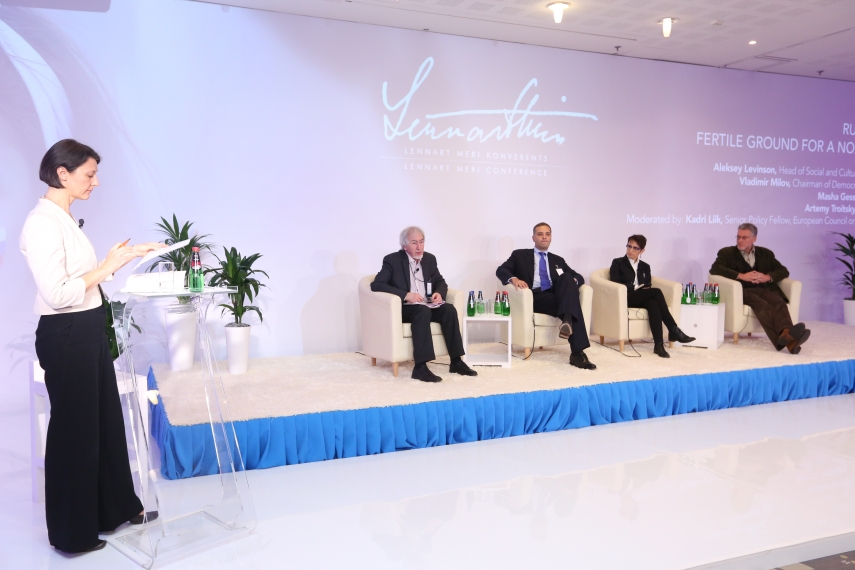 TALLINN - Tallinn once again hosted academics, political thinkers and politicians from all over the world, in the latest edition of the annual Lennart Meri Conference last weekend. The theme, “The Limits of Order,” stimulated some vibrant discussion across three days, while leaving open more questions than it answered.
There were several discussions that were hotly-anticipated by the audience, particularly a discussion on the media war being fought between Russia and the west amid the conflict in Ukraine. British writer, broadcaster and TV producer Peter Pomerantsev explained that, in his opinion, western media was going about the fight for hearts and minds in the wrong way, by trying to offer counter-propaganda to that offered by Russian networks such as RT.

“When people are in a cult, you don’t tell them their cult is wrong, you stimulate them to think critically... not by giving a counter-narrative,” said Pomerantsev, whose book “Nothing is True and Everything is Possible” attempts to explain how Vladimir Putin uses the media to keep his hold on power in Russia.
Pomerantsev added that banning Russian media was not the answer, rather, he questioned why western companies advertised there.

“I don’t understand why western companies advertise on Russian channels, when they [the channels] are spewing hate speech. We can put pressure on them. We should undermine their system, not screen it and block it and fall into their reflexive control.”

President Putin was also the topic of a prior discussion on Saturday entitled “The World According to Putin, Putin According to the World”, in which scholars including former US Ambassador to Russia Michael McFaul and Putin’s former advisor Andrei Illarionov attempted to answer the question of not only how the world’s perception of the Russian leader has changed with time, but also how Putin views the world, as his forces continue to occupy Ukraine.

Estonia’s government has long stressed the need for permanent NATO protection of the country, fearing Russian attack if a serious deterrent is not in place. In a discussion ostensibly about Ukraine, in which politician Hanna Hopko gave a passionate defence of her country’s right to sovereignty and independence from Russian rule, Estonian Prime Minister Taavi Raivas dismissed suggestions that there could be a challenge to Article Five of the NATO treaty in the event of a Russian invasion of one of the Baltic states, saying the US President had guaranteed it would be observed.

Not all delegates at the conference were willing to be so certain, as reflected by Arseny Sivitsky, Director of the Centre for Strategic and Foreign Policy Research in Belarus, who was at the conference to discuss his own country.
Sivitsky told The Baltic Times, in relation to the possibility of a Russian attack on the Baltics, “western military analysts think of this scenario not as hypothetical but as a real potential scenario. Some analysts think, in the case of Russian invasion of the Baltic states, NATO wouldn’t defend them, as there wouldn’t be consensus among the NATO states. There is no guarantee there will be consensus about the direct military response.”

As Pomerantsev had already hinted in his talk, and commentators have noticed, Sivitsky pointed out that there are divisions in how EU and NATO members view Russia. “Assessments by Western analysts say that EU and NATO countries are divided into groups. One is the hardliners, promoting a rather hard and strict approach to Russia; another is trying to provide dialogue with Russia. I guess Russian strategists are aware of this division... We know there are questions over the positions of Greece, Cyprus, Slovakia, Hungary, even Italy.”

“If we take into consideration the scenario of the last military exercises conducted by the Russian Army, it seems Russia was preparing for such possibly conflicts... Baltic states could be involved in a wargaming scenario according to the most recent military exercises,” Sivitsky added.

It was notable that, even in a teatime discussion called “Thinking the Unthinkable”, there was only minimal discussion of the solidity of the NATO alliance. The on-the-record meeting, in which everything from the possibility of nuclear war to that of Russia voluntarily handing Crimea back to Ukraine was discussed, was perhaps the day’s most disappointing.
In spite of the title, the guest speakers seemed timid in their choice of discussion topics, as if the presence of key governmental figures, and many European journalists looking for a soundbite for a story, was giving them pause. The effect, as in some other discussions in the conference, was almost to rubber-stamp existing EU government statements on the future of Ukraine and the Baltic states, rather than offer open, scholarly debate - though perhaps that was to be expected, given the scrutiny placed on this event.

Reflecting the impossibility in today’s Russia of any counter-argument to that of President Putin, Estonian President Ilves, who played a central role in recruiting speakers and delegates to the conference, asked Ilya Ponomarev, a member of the Russian State Duma, to attend. Ponomarev, a former vice-president of the Yukos oil company in Russia, has a proud recent parliamentary record, having voted against the so-called Gay Propaganda Law in 2014, also opposing in the Duma the accession of Crimea to the Russian Federation.

Ponomarev’s assistant Anastasia Popova, like her boss, was given what she described as “friendly advice” to leave Russia in 2014, due to her political activism. Currently in exile in the United States, Popova is considering her next steps. “I really do want to get back to my country. I’m a Russian person and a Russian politician, and even outside of Russia I’m working with the Russian diaspora, working with people who also want to get back to Russia. They still have some business there. I do believe that in a couple of years it will be possible for people to get back to the country and to rebuild their cultural, economic and political bases.”

In an open discussion, Ponomarev asserted that he believed there would be some form of aggressive Russian activity after the May 9th holiday in the country. The MP then repeated his assessment when speaking to us afterwards.
He said, “it is very much probable there will be another set of hostilities. There could be different things. There could be another offensive in Ukraine, it can be the final decision on accepting South Ossetia as part of the Russian Federation, it could be something else, but I feel sure something will happen because Putin feels extremely humiliated that he was boycotted, and when someone tries to ruin his holiday, he tries to ruin their lives,” referring to the widespread boycott of Victory Day celebrations by those opposed to the continuing occupation of Ukraine.

“I don’t think May 9th has anything to do with anything,” contended Kadri Liik, Senior Policy Fellow for the European Council on Foreign Relations, in a separate interview with us. “Having control over its satellite states is actually a much older [concept] that goes back centuries, and that’s what makes it so complicated.”

Liik’s argument is that it is in Russia’s interests to test the limits of the second Minsk Agreement, rather than waging all-out war. “As the second Minsk Agreement is so much in Moscow’s interest, effectively it gives Moscow leverage over Kiev’s decision-making, at least if you interpret it in a certain way. Moscow is likely to cling to that agreement and force its own interpretation on others. That means that Moscow cannot step up military offensive on too large a scale. Anything it does [will likely] be within certain limits... [such as] local skirmishes, as opposed to a large-scale assault that means Minsk is dead.”

This does not mean Liik is optimistic of seeing peace in Ukraine in the near future. “The truth is that Moscow’s and Kiev’s objectives are irreconcilable for the time being. The Minsk agreement charts out some de-escalatory steps while ignoring basic differences, which means that it can function to the extent that different sides’ practical considerations overlap, and the truce is in their interest.”

“It is bound to unravel in aspects where it touches upon longer-term strategic interests that are irreconcilable. I think Minsk will fail in the end, it is hard to see how it can be a long-term political solution, but not just yet; I don’t think Moscow has a good alternative plan, and I don’t think mindless conquest of territory is in its interest.”

One thing the conference had unanimity on was the need to commemorate the life, and tragic death, of Russian opposition leader Boris Nemtsov. Liik led a wide-ranging, and emotional, tribute from a succession of conference delegates, who told touching stories of their personal memories of a man who was willing to stand up to Putin’s rule.
It seems that even the broad sweep of international relations comes down to individuals. In his Lennart Meri Lecture, which closed the conference, Paul Goble, a former Special Advisor to the US Secretary of State, who now writes for Window on Eurasia, invoked the memory of his old friend, Estonia’s late former president.

“I think there’s no question [Meri] would have called for expanded rather than redirected NATO. After 1991, many thought that NATO needed a new purpose. In fact, Lennart Meri told anyone who would listen, it may have needed a new purpose, but it should never forget its original one, as the world may have changed, but not as much as some had deluded themselves in thinking.” Goble also asserted that Meri would have called for “a unilateral offer of NATO membership to Ukraine, in the face of Russian aggression.”

Though the lecture achieved its objective of linking the great historical figure of Estonia’s first president after re-independence to the modern political discourse, there were some in the room who felt it distasteful to link a deceased political leader, widely respected, to a decidedly hawkish, possibly even neocon, view of international relations.
Meri was many things - a polyglot, a philosopher, a peacemaker - and he set Estonia on the road to being a successful European nation. One thing on which we can be certain is that he would have been glad to have heard such diversity of debate on the global order in 2015.