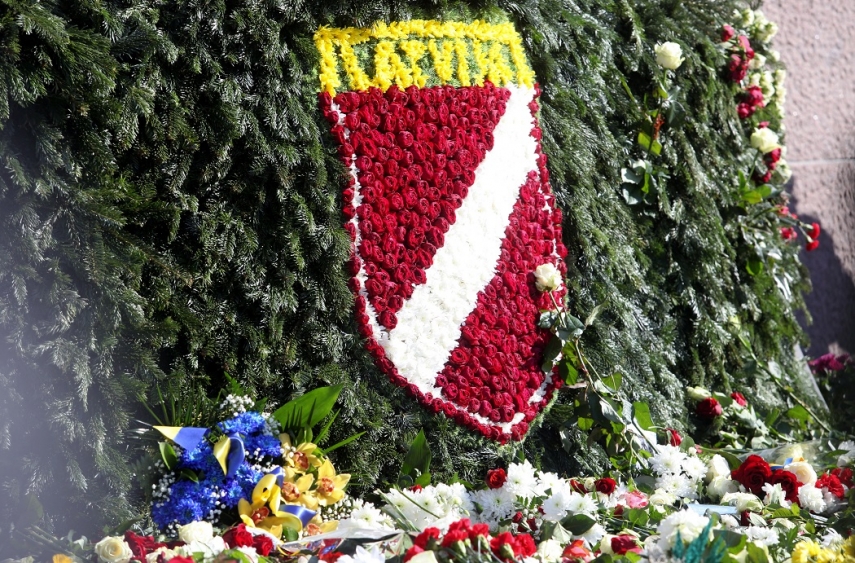 RIGA - The annual procession which is held in Riga to remember the Latvian Legion, or the soldiers who were drafted to fight on the side of the German forces in World War II, passed off peacefully in the city center today, although as usual several loud disputes broke out by the Freedom Monument and two protesters were detained.

As LETA observed, the traditional procession started off peacefully and without confrontation at St. John’s Church in the morning.

Many participants of the procession were carrying national flags of Latvia and other Baltic countries, as well as posters with texts like “No to Nazism, no to communism, no to occupation powers, yes to a free Latvia!”

Protesters, if there were any around, were not very visible in the beginning. Some people were seen engaging in discussions on history-related issues, but these were mostly conversations of likeminded people. The procession was watched by a high number of journalists, policemen and security guards.

The procession, which according to police estimates was joined by around 1,500 people, was met by the Freedom Monument by a group of more than ten people, led by Tatjana Zdanoka, the leader of the Russian Union of Latvia. Pro-Russia activist Vladimir Buzajevs and self-proclaimed anti-fascist Josifs Korens were in this group of protesters.

Korens’ Anti-Nazi Committee had announced a picket by the Freedom Monument for March 16, but to prevent confrontation, the Riga local authority ordered the organization to alter its plan because of two other events happening at the same place and same time.

The Anti-Nazi Committee appealed the local authority’s decision with a district court, but the court dismissed the appeal. Although Korens announced that the picket would be called off the protest apparently went ahead regardless.

A man from the Zdanoka-led group who was holding a poster with a picture of a Nazi concentration camp prisoner and shouting slogans in English was detained for resisted police orders. People in the Zdanoka-led group held posters reading in various languages “They fought for Adolf Hitler”, shouted various slogans and engaged in altercations with participants of the procession.

Since Zdanoka had not announced any official counter-demonstration against the Legion Day procession, the activities of her group drew police officers’ attention. Initially, the exchange of words was rather calm, but then the dispute escalated and one of the members of the group started resisting the officers. After a brief jostle, the man was handcuffed and driven away in a police vehicle.

Another protester in a T-shirt with a slogan supporting Latvia’s Russian schools rather unsuccessfully tried to attract attention to himself by shouting “Shame to Hitler’s fans!”

Already before noon, the crowd around the Freedom Monument started to disperse, although like every year, the March 16 gatherings were followed by verbal disputes between supporters of opposite views. Although the disputes often involved the use of some foul language they did not lead to scuffles as heavy police presence apparently helped cool the passions.

Participants of the disputes, predominantly elderly people, debated the Soviet occupation regime’s impact on Latvia and the role of the Latvian legionnaires in World War II.

A man by St. John’s Church in the old city distributed leaflets expressing support for Latvia’s Russian schools. Although he claimed he did not represent any political party, he called on people to gather in Dome Square on March 30 where the Zdanoka-led Russian Union of Latvia is organizing another protest against a transition to education in the state language in all Latvia’s schools.