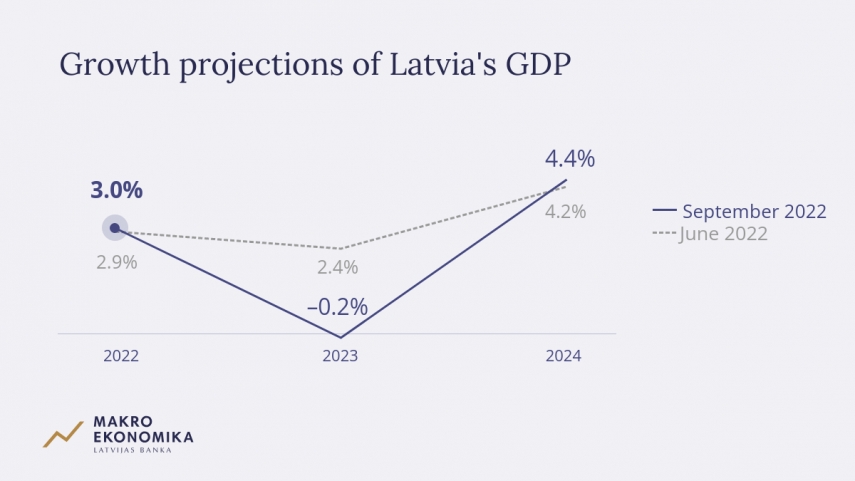 Latvijas Banka has published its latest September 2022 macroeconomic forecasts for Latvia. These forecasts are surrounded by a high degree of uncertainty resulting from the unpredictable war started by Russia and the related developments in global prices, particularly those on energy.

- The baseline scenario of Latvijas Banka's forecasts provides for a temporary recession. Although the soaring energy prices have resulted in a deterioration of the future economic outlook, the solid growth observed at the beginning of the year has allowed to maintain the GDP growth projections for 2022 at 3.0%, similar to the growth rate projected in June (2.9%).

- With the effects of unfavourable factors still persisting at the beginning of 2023, Latvia's economy can be expected to stagnate next year. Therefore, the forecast for 2023 has been revised significantly downwards to –0.2% (2.4% in the June forecasts).

- With inflation returning to lower levels, Latvia's economy can be expected to start recovering as of the second half of next year as was expected within the June forecasting round. GDP is projected to grow by 4.4% in 2024 (4.2% in the June forecasts).

- Inflation projections have been revised upwards for the whole projection horizon mostly on account of higher energy (particularly, gas) and food prices as well as the assumption that the prices of these products will be higher than previously expected.

High inflation is a global phenomenon and is explained by the energy and food prices:

- Record-high energy prices reflect the concerns over the ability to maintain a sufficient supply for the coming heating season in Europe in the circumstances of decreasing Russian gas imports.

- Higher energy costs and disruptions in the trade in food commodities contribute to food price inflation.

- In its September projections, the European Central Bank (ECB) has revised its previous projections for the euro area's inflation for 2022, 2023 and 2024 upwards to 8.1%, 5.5% and 2.3% respectively on account of longer-persisting elevated energy and food prices as well as a broader impact on other product prices.

- Inflation in Latvia has already exceeded the level of the previous two decades, and Latvijas Banka has raised its inflation projections on account of rising energy and food prices.

- In July, the Governing Council of the ECB decided to raise the key ECB policy rates by 50 basis points frontloading the transition from the prevailing highly accommodative level of policy rates towards levels that will ensure a timely return of inflation to the ECB's 2% medium-term target.

- In September, the Governing Council of the ECB raised the key ECB policy rates by 75 basis points, with the rates on the deposit facility, main refinancing operations and marginal lending facility reaching 0.75%, 1.25% and 1.50% respectively.

- The Governing Council of the ECB suggests it will continue to raise interest rates over the next several meetings, yet any future decisions will be data-dependent and follow a meeting-by-meeting approach.

The high inflation is a headwind to global growth, and the outlook for economic activity in the second half of this year and for next year has been revised downwards:

- Euro area's economic growth is expected to decelerate significantly, as the soaring inflation, supply bottlenecks and energy supply disruptions as well as the weakened confidence are weighing on consumption and production.

- With unemployment decreasing further, Latvia's labour market remains tight. At the same time, the purchasing power of the population and consumption are weakened by the inflation outpacing the income growth.

- Investment in construction is put on hold due to the rising costs and the uncertainty preventing businesses from long-term borrowing.

- Exports are dampened by recession expectations and weaker demand as well as the already observable drop in the prices of some raw materials, including wood. Trade activity of Latvia and its foreign trade partners is weakened by high levels of the previously built inventories.

- The rapidly rising energy and labour costs in Latvia may weaken competitiveness.

Government support through energy crisis and household savings are partly helping to absorb the deterioration of household consumption and corporate finances:

- Latvijas Banka estimates that the effect of the fiscal support provided during the heating season 2022/2023 (almost 700 million euro) on Latvia's real GDP will reach 0.64% and will slightly reduce the inflation.

- Although the government measures are increasing the deficit, they are particularly important to help low-income population through energy crisis and safeguard the population against extreme energy price rises, at the same time preserving the energy saving incentives.

- The uncertainty regarding the availability of sufficient energy supply and the soaring energy prices have clearly demonstrated the need for ensuring energy independence and efficiency.

- The high degree of uncertainty stemming from the crisis could initially cause cautiousness in household spending. Nevertheless, the fall in the private consumption will be mitigated by part of the households releasing their previously made savings for a rainy day.