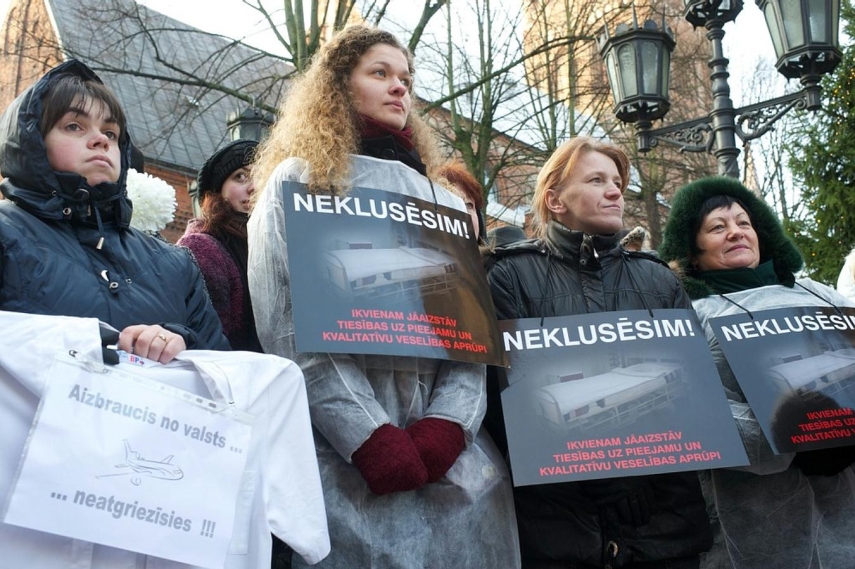 A previous protest by Latvian healthcare workers in 2011 in Riga [Image: cryptome.org]

The Trade Union of Health and Social Care Employees of Latvia will hold a protest by the Latvian National Library at noon today.

The protest is scheduled for the same time that an informal meeting of the health ministers of European Union member states will be taking place in Riga.

The protest will take place in a form of a discussion, allowing people to publicly voice their opinions.

The union emphasised once again that the rally was being organised in order to protest against insufficient funding for healthcare, which this year is at just 3 percent of gross domestic product. Another major problem they mentioned is that two largest hospitals in Latvia may be on the verge of insolvency.

The union also points out that the proportion of residents with neglected health care needs in Latvia is the highest in the EU, that salaries for medical personnel increase only after considerable delays, when compared to other sectors, and that only 50 percent of graduates from medical universities and colleges seek employment in Latvia.

However, the Latvian Health Minister, Guntis Belevics, a member of the Greens and Farmers' Union political party, has claimed that the union have chosen the "wrong place and time" for a protest, during an interview with the Latvian Television show Rita Panorama.

"Healthcare is a national matter for each country, it is not only a matter for the European Union," the minister said. He believes that the Cabinet of Ministers is the right place to voice one's demands; while the best time for this would be during talks about next year's budget.

At the same time, the minister said that he will inform the EU's health ministers about the insufficient level of funding for healthcare in Latvia. He also repeatedly confirmed that he supports the protesters' demands and is ready to stand up for them.

"However, it does not make much sense in this context. Asking for additional funding will make sense only when the right time comes - during budget talks," the minister emphasised.