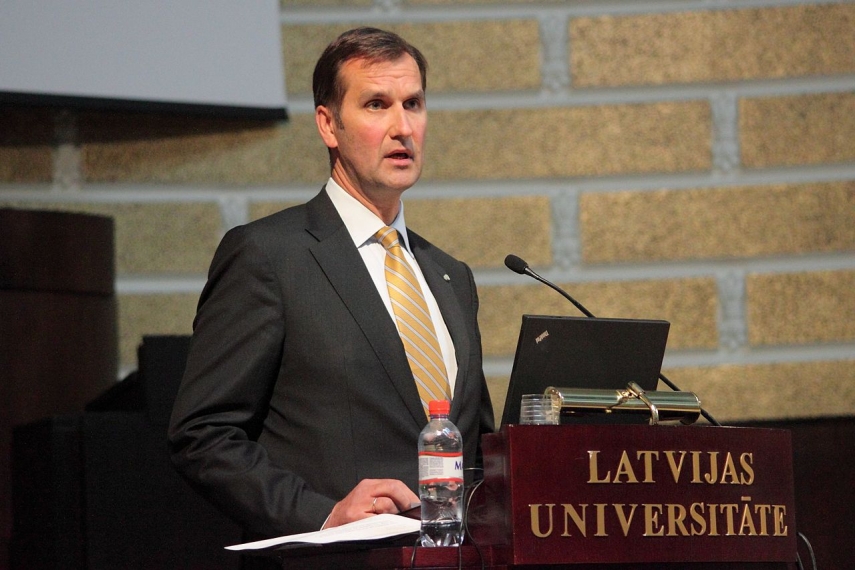 RIGA - Within the framework of the Latvia-Russia Humanities Working Group, Latvia wishes to request access to Russia's state archives, Latvia's new Ambassador to Russia Maris Riekstins said in an interview with LETA.

Previous experience shows that Latvian historians are granted access to archive materials from time to time, but in a very selective way and not everything these historians wish to view for their historical research, the ambassador explained.

''Within the framework of this working group, Russia speaks about its viewpoint on various matters, including how Latvia is keeping to its international commitments in regards to national minorities, language matters and so on,'' he said, adding that the Latvian side always replies how these matters are dealt with in the country and in accordance with international commitments.

There are many matters which Latvia would like to see move forward with the Russian side, like, for example, regaining the originals of movies taken in pre-war Latvia. Latvia has expressed the desire to regain these historical and cultural legacy objects, but the ambassador points out that Russia has some kind of legislation in place which does not allow this. ''I will go to Moscow, talk to some over there about this matter. I hope that this is possible, and Russia would be able to make a positive gesture towards Latvia in connection with its centennial anniversary next year. This would be great,'' the diplomat said.

He said that it would also be important to renew the Latvia-Russia Commission of Historians, and added that this matter was brought up ten years ago with Russian Foreign Minister Sergei Lavrov, who was evasive on the issue. Riekstins said that it is important to try to come to a common understanding if not on all historical matters, but at least some. Riekstins said that the histories of Latvia and Russia are very complicated, and that Latvia too has pages in its history which not each Latvian wishes to read. Admitting to past mistakes shows the maturity of a nation, he added.

''When going to Russia, I of course am aware of this mutual historical burden, which we cannot ignore nor forget. Russia is our neighbor, and despite our complicated history with this country, there are many things that have moved forward between the two countries,'' he added.

The former Latvian ambassador to NATO also expressed regret that there are many in Russia who hold negative perceptions of Latvia, and that the embassy's task is to try to reverse these stereotypes and prejudices. He said that he wishes to break the stereotypes Russians have about Latvia, like why the country is strengthening its security, the reason NATO is in the Baltics, and that this is not meant as a threat to Russia, which is frequently how this is presented in the Russian media.

''The stereotypes Russian residents form about Latvia is influenced by the information space in the country. I do not know if this can be changed in just a few years. If Russian power structures do not themselves try to change these stereotypes about Latvia, this will be a very difficult task. I believe that public opinion in Russia is being influenced by authorities much more than in Latvia, Germany or elsewhere in Western Europe,'' the ambassador believes.

He also pointed out that much is being discussed about hybrid-threats, which is why Latvia must strengthen its capabilities to counter such threats and gain the support of the population. ''Nobody else will do this for us, not our partners in Europe, not the United States. This is the task set forward for our own politician - make sure that society supports what we are doing here. Politicians play a highly responsible role in what we do,'' the ambassador added.