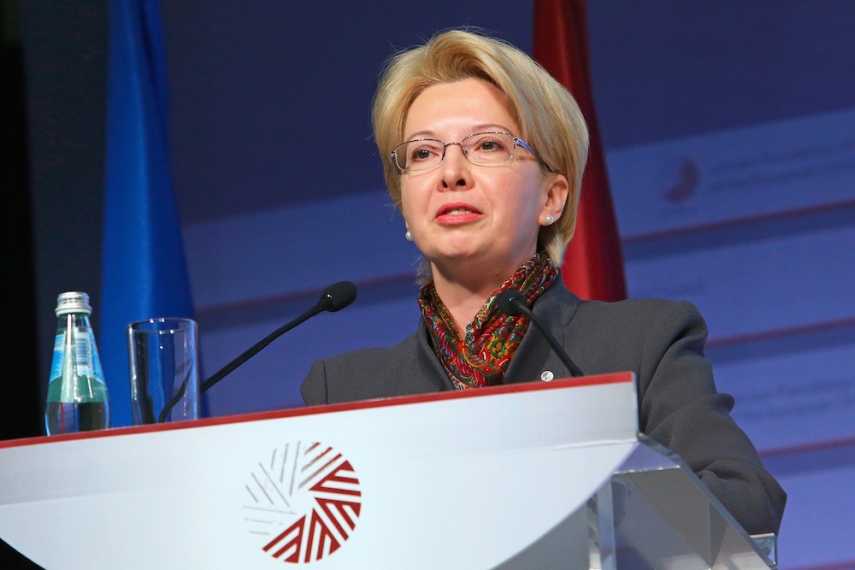 During her speech on Latvia’s 97th Independence Day, the country’s parliamentary speaker,  Inara Murniece, said people defend what they cherish and all efforts have to be made to achieve that the Latvian state is precious to them.

“The state is the highest form of a self-organization and will exist as long as the people want it,” she said.  “When there is this will, a state remains, even if occupied by foreign invaders or affected by the challenges of the era.”

Murniece welcomed a recent upsurge in Latvian patriotism, which she feels is demonstrated by increasing numbers of Latvians joining the Home Guard.

“The past year had been full of dramatic events across the world,” she said. “The sympathy and solidarity that the world showed to France after the November 13 terrorist attacks clearly signals that Europe will not give in to terrorism and fear-mongering, and that it will remain true to its values.”

Speaking about Russia’s aggression in Ukraine, Murniece said it had revealed geopolitical delusion of the international community.

”It was a harsh wakeup call for carefree Europe busy with its ‘business as usual’ attitude” she said.

Murniece believes that for Latvia, it strengthened confidence that European Union and NATO membership had been the right choice. “Now we have to take another step forward and achieve long-term presence of NATO forces in the Baltics.”

Commenting on Latvian politics, Murniece said that political, economic and ethnic division could destroy the state, and Latvians were losing trust in politician.

She also underlined the demographic problems in Latvia, saying the country was facing a demographic crisis but a comprehensive support program for families with children still had not been created.

Murniece then spoke out against mass discrimination of ethnic Latvians in the local labor market where employers demanded from employees fluency in both Latvian and Russian.

"Why should Latvians in their own country be required to speak a foreign language at work when their job has nothing to do with foreign business?” she questioned.

“Young Latvians are emigrating because they are being discriminated against in the local labor market. Discrimination against Latvians in their own country must be stopped.”

Latvia celebrates the 97th anniversary of the proclamation of the Republic of Latvia on November 18.

The festivities in the Latvian capital Riga will include a military parade and the Latvian president’s Independence Day speech at the Freedom Monument in the evening, to be followed by a traditional fireworks show.