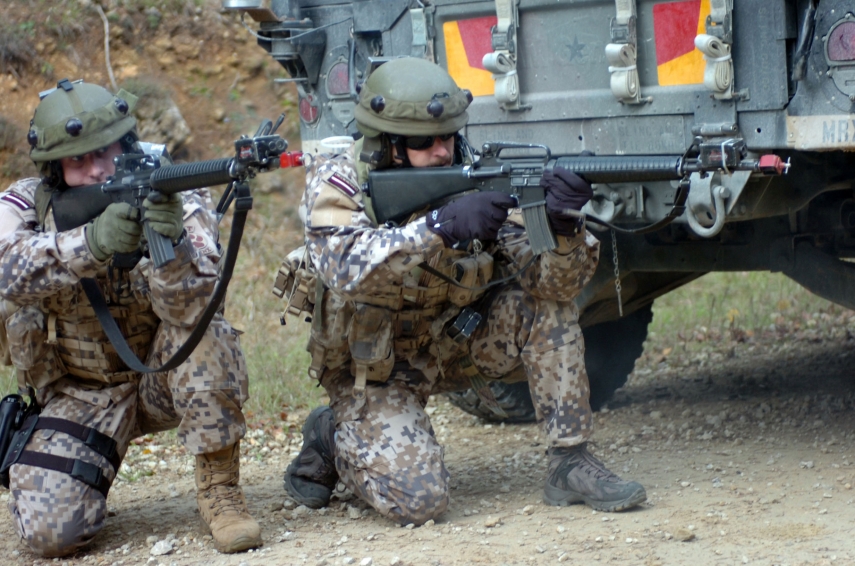 Latvia will increase its defence spending next year to 1 percent of GDP, which is set to rise to 2 percent  by 2020. Most of the additional funding will go to new development projects, including development of the Home Guard's combat capability, anti-air defence, and upgrading the motivation and remuneration system for personnel, the Defense Ministry's Military Public Relations Department informed LETA.

Earlier this year, 800 Carl Gustav anti-tank weapons were bought, as well as 50 Scania trucks and 50 "Mercedes Benz" lightly armored vehicles for a total of 4 million euros. As a large number of the Home Guard's weapons and vehicles are obsolete, these new additions will significantly improve the Home Guard's mobility and combat readiness.

It has also been decided to invest a total of 70 million euros into the development of the Home Guard and the creation of rapid response units over the next three years.

As a result of increased Russian military activity near the borders of NATO airspace, it was recently decided that over the next seven years 158 million euros would be invested in developing Latvia's reconnaissance, airspace surveillance, and anti-air defense capabilities. The funds will be used to buy and modernise air space radar and sensors, anti-air defense systems and weapons.

The Defence Ministry also notes that the Air Force aviation base development project, ib which 82 million euros have been invested since 2006, entails upgrading the Lielvarde Airfield according to NATO standards, and that the airfield will open to day and night operations this year. The airfield has been used multiple times in 2014 for personnel and vehicle transport, as well as for military exercises.

On March 20, P-09 Rezekne, the fifth Skrunda patrol boat P-09, which was built entirely in Latvia, was delivered to the Armed Forces in Liepaja. The five patrol boats of the Naval Forces are regularly used in patrol and rescue missions in the Baltic Sea. The vessels will be further upgraded in 2015.

As part of the Land Forces Infantry Brigade development, on September 4 Latvia and Great Britain signed an agreement under which Latvia will buy 123 combat vehicle reconnaissance (tracked) armoured vehicles for 48.1 million euros, with the first vehicles due to be delivered in 2016. Latvia will also purchase anti-tank missile systems to equip the armoured vehicles.

In addition to this, 13.2 million euros has been invested in the development of the Armed Forces' infrastructure: the most important projects include the construction of new barracks and a weapon repair workshop at the Adazi Military Base, a new surveillance post near Ventspils, a repair shop at Preili Home Guard Base, infrastructure upgrades at Lielvarde Base, and the renovation of the NATO Center of Excellence for Strategic Communications in Riga.

Development of soldiers' social guarantees system will continue in 2015, with the goal being to motivate soldiers to remain in service for as long as possible.