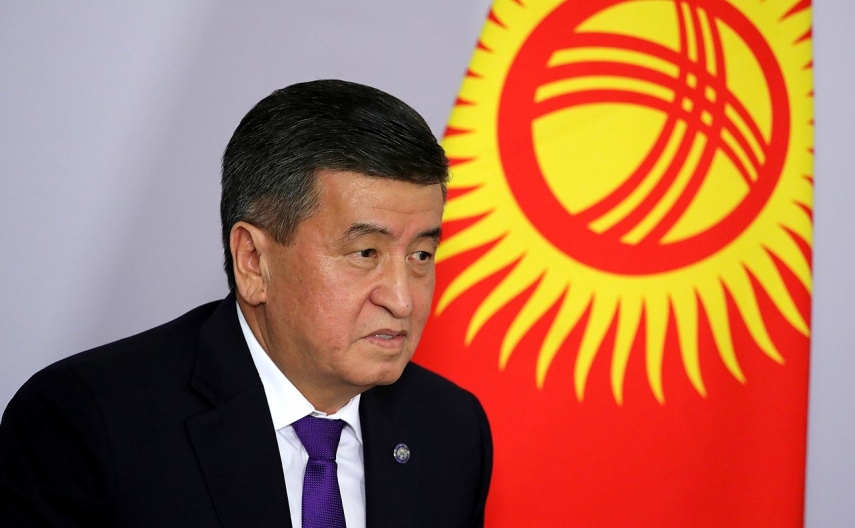 BISHKEK - Kyrgyzstan will be bolstering cooperation with the European Union and the United States, Kyrgyz President Sooronbay Jeenbekov told Kyrgyz ambassadors at a meeting in Bishkek on Thursday.

"My official visits to Germany, Switzerland, France, Hungary, and Azerbaijan are being prepared. I am sure that these will strengthen mutually advantageous cooperation in trade, the economy, culture, humanitarian affairs, and other fields," Jeenbekov said.

"My working visit to EU institutions was a key event of last year. Trust-based personal contact was established with the EU leaders. A new agreement on enhanced cooperation with the European Union is almost ready," he said.

Kyrgyzstan will continue to export goods to the EU within the framework of the Generalized Scheme of Preferences (GSP+), Jeenbekov said.

"Considering that an increasing number of our compatriots are taking residence in Paris and Rome, I am instructing the Kyrgyz Foreign Ministry to consider the opening of diplomatic missions in those cities in accordance with the limits of the approved budget," he said.

Jeenbekov also expressed an intention to boost cooperation with British and U.S. partners.

"I think we will intensify the development of bilateral cooperation with the United States and the United Kingdom," he said.

"A new agreement on cooperation with the United States is being coordinated. Interests of both sides must be taken into account in discussion of this document," Jeenbekov said.

The Kyrgyz-U.S. agreement on the return to Kyrgyzstan of $4.6 million illegally removed to the United States by Maxim Bakiyev, the son of former Kyrgyz President Kurmanbek Bakiyev, "is a good start for this work," Jeenbekov said.

"It should continue on a permanent basis," he said.

Kyrgyzstan is interested in developing economic cooperation with the West in the processing, light, and food industries, as well as in the energy sector and tourism, he said.

Kyrgyzstan and the European Union began talks on a new agreement in 2017. The document is due to replace the partnership and cooperation agreement which took effect in 1999. It is expected to highlight political cooperation, trade, investment, economic cooperation, support for sustainable development, and other aspects of bilateral agreements.

In 2015, Kyrgyzstan unilaterally denounced the cooperation agreement it had concluded with the United States in Washington DC in 1993. The decision followed the U.S. Department of State's decision to present an award to human rights activist Azimzhan Askarov, who was sentenced to life in jail in Kyrgyzstan for organizing mass disturbances and acting as accomplice to the murder of a law enforcement officer in southern Kyrgyzstan in June 2010.