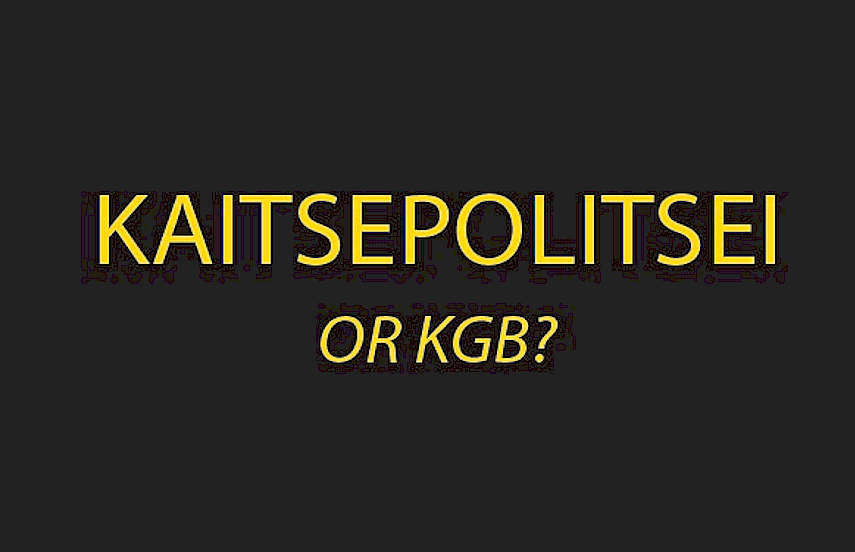 TALLINN - On December 15 2014 Kremlin sources exclusively revealed that a long-serving member of the Estonian KAPO was in fact an undercover mole working for the Russian Federation, and had successfully leaked untold numbers of the Baltic nation’s secrets to its Eastern neighbour over the years.
Uno Puusepp, 63, had been moved to the Estonian KAPO after the fall of the Soviet Union in 1992. Since that time he had been serving in the Estonian security service as a technical specialist, up until 2011 when he left and moved to Moscow. Yet it is claimed that this occupation was merely a front, behind which he could gather information and transmit it back to his Russian paymasters.

Puusepp’s alleged former identity was revealed via the pro-Kremlin television channel NTV, whose parent company is Russian energy giant Gazprom, during a 40-minute film made in close co-operation with the Russian state’s FSB secret service. In this expose the programme claimed that Puusepp’s position as an engineer within the KAPO made him the perfect choice of candidate to pass on secrets from the West, through bugging, wiretapping and the use of various other surveillance techniques.

According to the NTV programme Puusepp had unchecked access to secret information gathered through phone, email and text-based communications. Such information was gleaned from many countries, including – but not limited to – Estonia, the United Kingdom, the United States and Sweden. Puusepp was reportedly able to inform the Russian government about security service movements and covert operations in each of these countries. The film shows what appears to be a communicade coming from MI5, the British internal state security service. The programme even stated that the hierarchy within the government of the Russian Federation was well aware of the information that Edward Snowden, the former United States National Security Agency operative turned whistle-blower, began leaking regarding NSA operations back in 2013.

The depths of such supposed surveillance interceptions, and counter-operations can be summed up by the following extract from the programme, ‘Several agents of foreign special services were convicted, and a leak was prevented of classified information via a device that was to be inserted into a Russian telecommunication cable [for] the technical penetration of the Russian Embassy in Tallinn.’

The narrator of the programme when on to surmise, ‘There are few people in Russia who have done more for its security than the Estonian Uno Puusepp and his handler, former KGB officer Nikolay Yermakov.’ A lofty claim, but one that highlights the impact that such a character in this position could have had, if indeed the programme can be taken as fact…

Truth or International Mockery?
In the immediate aftermath of the airing of this programme there was widespread condemnation regarding its factual accuracy, with many claiming that the provenance is simply too close to the Russian government to be believable. The timing of the release of such a powerful statement is a cause for question also, coming at a time when there are such obvious reasons to cause disruption to Estonian security service operations. Relations between East and West – not least between Moscow and Tallinn – are at an all time low in the post-Cold War era.

Such public revelations are something that would have previously been dismissed as a work of pure fiction or just a leak from the script of the next James Bond film. However, in recent years we have become used to hearing such stories and have afforded them increased credence. The information released in the 2006 WikiLeaks scandal; and the 2013 leakage of NSA material by Edward Snowden are but two instances in recent history that have lent an air of plausibility to such stories. Many have stated that the Puusepp revelation is simply an attempt by the Kremlin to play on this heightened plausibility, in an effort to embarrass and destabilise the Estonian and other Western security services.

Estonian Internal Security Service (ISS) Director-General, Arnold Sinisalu, has stated that the revelation that there was an operation to plant a surveillance device at the Russian Embassy in Tallinn was partly true, telling ETV’s Kahekone talk show,  “I can confirm that yes, there was such an operation but I unfortunately can’t say more. The content and aim of it are still a secret. It can be said afterwards that he probably interrupted it…”. Sinisalu has directed the ISS to open criminal proceedings against Puusepp under the charge of treason.

Regardless of the outcome of an investigation or the factual accuracy of this particular account, it has become apparent in recent years that such claims are not as fictional and easily dismissible as had once been thought. Added to this, it is yet another symbol of the lengths that the Kremlin will go to in an attempt to destabilise Western governments and cause unrest among their populations. The Cold War may be over, but the war of words is still very much ongoing and both sides will, seemingly, do anything to win.