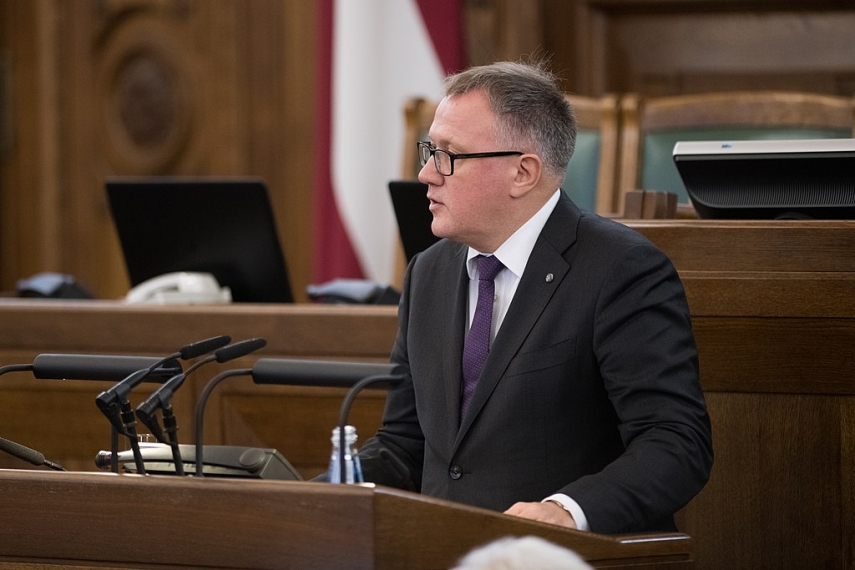 RIGA - It seems that KPV LV politicians Artuss Kaimins, Aldis Gobzems and Atis Zakatistovs each have a different point of view on the government formation process, thus it is hard to tell what they are prepared to offer, one of New Unity's leaders Arvils Aseradens told LETA.

Aseradens said that the proposal today made by Kaimins today has only been made through the media, not directly, thus it is hard to comment. ''Furthermore, it is not clear who KPV LV will be putting forward. On one hand, Gobzems is making his proposals, on the other - Kaimins. In addition, we are receiving different signals from Zakatistovs as well,'' Aseradens added.

He added that Kaimins' offer would be difficult to implement, as prime minister candidate Krisjanis Karins (New Unity) himself once served as a minister, and that there are politicians from New Unity who are participating in the government formation process and have previously served as ministers.

''Technically, such an offer excludes New Unity from the government,'' Aseradens said, adding that consultations between political parties on the formation of the new government will resume after the Christmas holidays.

As reported, KPV LV leader Artuss Kaimins believes that prime minister candidate Krisjanis Karins (New Unity) should not accept Aldis Gobzems (KPV LV) for interior minister in the new government, but at the same time also exclude from the government persons ''from the old political parties'' who have previously served as ministers or have held top posts.

''I propose to Karins, as the potential prime minister candidate, to exclude Gobzems from a potential government, but also persons from the so-called old parties who have previously served as ministers or held top posts,'' Kaimins said in a statement.

He pointed out that politics is ''the art of compromise'', where it is necessary to overcome ''personal ambitions for the good of the country''. Kaimins said that if all the involved parties drop their personal ambitions it would be possible to quickly from the new government.