Klaipedian businesswoman Donata Kuprescenkiene: “It is a time for new opportunities!” 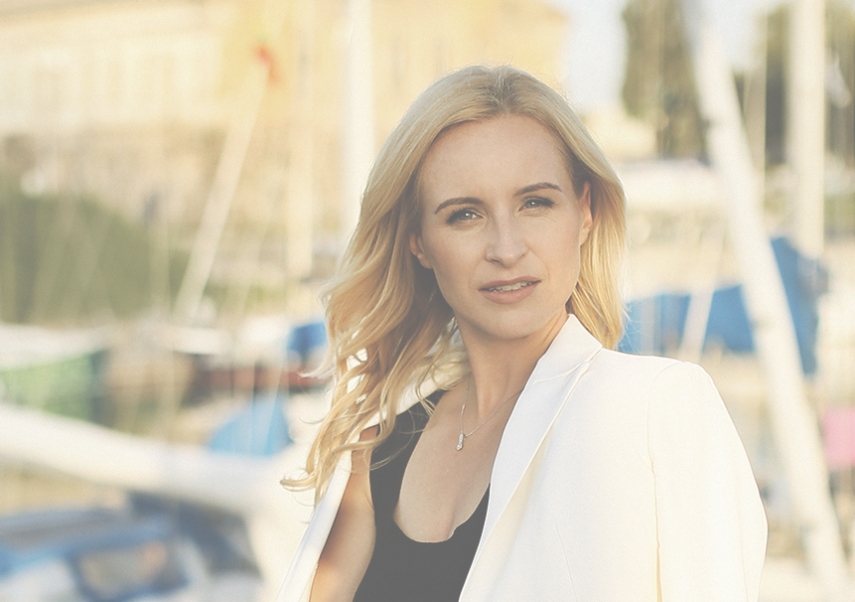 Owing to her natural and profuse kindness that she emanates with the never-face-leaving smile and her ability to get along with everyone, many had predicted that Donata’s true vocation is teaching. Her career as a devoted, loved-by-all teacher seemed to be in her blood, particularly since she herself has cherished the idea – hence the studies of special pedagogics and logopedics she completed in Siauliai, Lithuania’s fourth-largest city, her hometown, in northern Lithuania. However, the traction of the Baltic Sea, some 170 kilometres away, was irresistible in the young woman’s life. So Donata Kuprescenkiene, who is now co-owner and director of a vibrant bullyish logistics company, packed up in 2005 and moved to Klaipeda, the never-freezing Lithuanian seaport, where she eventually set up “Addways Logistics”, a logistics firm.

Her decision to relocate turned out to have been a life-changer – for good. “I’ve always loved the Baltic Sea. It is so wondrous and impressive, with its seething energy. Besides, my older sister Gintare lived here already, so my trips to Klaipeda were part of my weekends. We both are very close and she is truly my best friend,” Donata Kuprescenkiene told The Baltic Times. “I’ve never regretted the decision to relocate, although the inception of my new life here in Klaipeda did not go like a hot knife through butter, especially in the very beginning,” Donata grinned reminiscing about the start. “In 2005, I could not even dream of playing first fiddle in a company, especially one in the very competitive logistics sector.”

In hopes of getting a job in the seaport, she had sent out dozens of her CVs before moving here, but, unfortunately, the answers from plausible employers were scarce, for which her CV was partly to blame – with the previous jobs as  front desk receptionist at a hotel, a waitress, the experience as a representative of an international company in Siauliai and a clerk in a bank in the city it left the impression of a hodge-podge of little relevant jbs, definitely not a solid CV.

„However, I was lucky to get a job at „Orion Global Pet“, a global company with an affiliate in Klaipeda, where it still operates a pellet factory. The first question I was asked by the secretary was this: „Do you speak English?“ I said „yes“ – in fact, I‘d worked in the United States for nearly a year, so  my English was quite decent,“ she remembered. „I was offered the position of assistant to the head of the marketing department, which I gladly accepted.“

But soon she ended up working in a small logistics company as manager. „We will toss you in the pot and you‘ll learn everything on your own,“ the new employer wisecracked before signing her employment papers.

„I still feel very grateful to the people for the trust they showed to me,“ Donata Kuprescenkiene says. „When I think of logistics, I firstly associate it with communication with clients, foreign trips and challenges. This is something I could not imagine my life without.“

When in 2008 Donata left the job for maternity leave, she was swooning: „Oh, the time has come to savour every minute of my new life – as a mum. “

But baking pies and embroidering napkins for her baby, something she was seeing herself doing when expecting the baby, was not certainly her true vocation, Donata realised soon.

„The fetus was still making noise in my belly, when I, a true fidget, started thinking: „I want my own logistics firm! Yes, my own!”

„As much as I am all immersed in the business, the children are my true joy, my happiness and the gift of my life,“ Donata Kuprescenkiene underscored.

When, with the company already set up, one day Donata was hastily answering a message about the first shipment entrusted to the company, when a little bird chirruped nearby and flew over her, besmearing her phone screen with poop.

“I am a person of faith, one kind of pious, even a little bit superstitious, so I looked the bird’s way gratefully and wished it well,” Donata Kuprescenkiene laughed remembering.

But the burden running the company on her own was too much, she admits. Hence, the decision to accept a co-owner and share the liabilities and the pie.

„Frankly, the decision was based on my intuition. The logistics sector is extremely competitive and stressful. I just started feeling at the point I won’t be able to enter new markets on my own. As I had known him (Donata would rather not name the person – due to her prejudices, perhaps? -L. J.) for a couple years from our joint work in the past, I felt a businessman was the right person to share my business with. My intuition was right 100 percent: he is very responsible, experienced, caring and simply a great guy,” Donata Kuprescenkiene emphasised to The Baltic Times.

It is intuition that she tended to underscore throughout our hour-long conversation.

„To tell the truth, it is very important in my life. Furthermore: I often go by it. When you head a logistics company, one expects you to be precise, calculated, numbers-oriented and focused. But I am different, however,” she grinned, “although I‘ve „befriended“ all the numbers by now.”

Nevertheless, when it comes to the decision-making, even her business partner turns to her: „Donata, what does your intuition tell you?“

Her being a pretty, hardcore emancipation-less woman, both at work and in the daily life, has misled some of the people in her surroundings too. Another day when she was bypassing an Azeri truck driver on the staircase in the office, she caught him cast a quaint glimpse at her.

„He perhaps took me for a naïve, mini-skirted secretary, which I say with all my respect to all secretaries out there,” Donata Kuprescenkiene laughed. “Imagine how befuddled he looked when I showed up to sign his employment contract!”

Yet, women are a clear majority in the “Addways Logistics” office – of the 10 people, 7 are lasses.

“Frankly, I do not care about gender when hiring, but women’s solidarity does matter to me. Most of our drivers are men, but I cannot wait for the day when we take a woman for the job. Women truck drivers are common in foreign logistics companies,” Donata Kuprescenkiene noted.

With the reins of the company already being firmly held in her hands, one of her male managers admitted to her later: “You stirred much fuss in the company in the beginning. And, yes, many were expecting you to trip on the smallest pebble, which just did not happen.”

Unlike many other similar companies, „Addways Logistics“, which is among the modest ones in its size, has sliced a significant portion of the markets in Russia, Belarus and particularly in Kazakhstan.

„Our company is a niche-market and growth-oriented, one with a well thought-out bullyish expansion to the markets and beyond,” the “Addways Logistics” co-owner emphasised.

„Our shipments are very specialised and of the highest quality. Business with the Caspian Sea clients, especially those in the oil business, compels us to go in lockstep with the novelties, keenly monitor the legislative and other changes, both in the European Union and in the countries we‘re working with,“ Donata Kuprescenkiene underlined.

„Addways Logistics“ runs a bureau in the Kazakh town of Atyrau, where many international companies are settled.

As for the COVID-19 pandemic, it has been bad, but not disastrous for Donata Kuprescenkiene’s business.

“It definitely creates challenges, but at the end of the day, I see new opportunities arising. As a company, we’ve become a lot more flexible – the remote work has been part of our routine, although some of my colleagues miss human interactions, those face-to-face meetings,” Donata Kuprescenkiene noted.

Inquired where she herself sees “Addways logistics” 10 years from now, the Klaipedian did not hesitate to answer: “We will have evolved into a big international company with several bureaus globally by then. Maybe I will be heading the company in Tenerife then?”

It was then that I dared to accost her with the question about her personal life. Is the active lifestyle she leads compatible with a healthy engaging relationship?

“I’ve had quite a rocky relationship with my former husband of whom I want to speak only positively,” Donata admitted before adding: “Now, I want to devote my time to our daughters and myself, as much as I can.”

“I am really enjoying active leisure, and the sea has to be part of it. Just sauntering carelessly along the seashore can work magic on your wellbeing. Sports are also essential in my life in ridding myself of the daily stress,” the businesswoman said.

I caught myself thinking she could be a poster child for women’s empowerment, but Donata Kuprescenkiene was sincere again, doubting whether she fits the role.

„Yes, I am a businesswoman, an independent woman and, yes, I am a single mother, but feminism, women’s emancipation, two so often discussed topics, do not echo well with me,“ Donata simpered. „To be honest, I‘d rather have a man I can trust beside me,“ she said.

But mindful of women‘s causes, she, along with her friend Anike Rociene, has recently kicked off an Active Women’s Club in Klaipeda.

„I am happy to have realised my long-cherished idea – coalesce women who share interests of an active, sportive lifestyle. I want the women to try out some new activities and challenges, be it beach tennis, jogging or something else. Children are welcome at the club, too,“ Donata Kuprescenkiene said.

To foster her spirituality, she attends weekly gatherings of the brothers and sister of faith in the St. Pranciskus Asyzietis Church in Klaipeda, where Brother Benediktas engages all the attendants in spiritual conversations.

„I feel elevated there, however, I do not regard myself a faith zealot,“ Donata Kuprescenkiene emphasised.

And the long walks she takes at least two or three times per week along the Baltic sea, witnessing the ubiquitous eternity of a loving benevolent human being’s soul like hers, are definitely fulfilling and, needless to say, jacking up for a new day – with all the challenges it brings along.