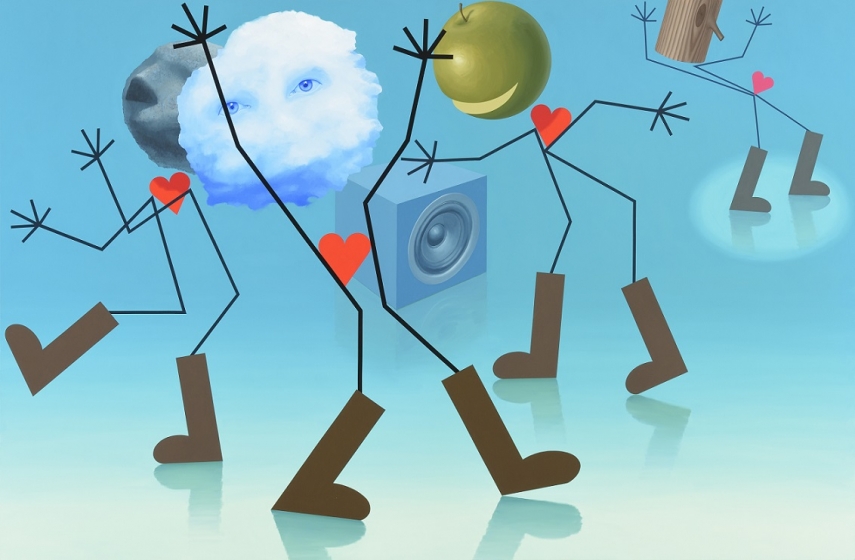 From 7 June to 25 August 2019, the ARSENĀLS Exhibition Hall of the Latvian National Museum of Art in Riga (Torņa iela 1) will present the solo exhibition Dance at the Lonely Hearts Club by internationally acclaimed Estonian artist Kaido Ole.

“Art is like the periodic table of elements. There is the location. All you have to do is score! Create a painting and, if it matches the structure of the world, then you’ve scored. Bull’s-eye!” In this way Kaido Ole tries to write his art into the world order. Ole does not attempt to increase the number of worlds by forming a new one, but he feels the need to place himself and his art in the existing structure of the world. And the world in which he lives is ordered.

The title of the exhibition represents not only a reference to one of his paintings, but the implied notion of dance also provides a perfect metaphoric connection to Kaido Ole’s art in a broader context. Just like Nietzsche’s Zaratustra juxtaposes dance to his greatest enemy, “the spirit of gravity” (Geist der Schwere), Ole gives himself to a free flow of ideas, lightness of expression and playfulness in his art, opposing the direction of gravity and tending to fall upward. Moreover, in the cultural historical aspect, dance can be viewed not only as a form of communication and forming relationship among people, but also as a form of self-examination, awareness and formation of the unity between the self and the body. Both of these aspects are important in Kaido Ole’s art and conceptually form the thematic framework of his Riga exhibition. Painting for the artist is a place to meet both the world and his own self, simultaneously.

The artist’s interaction with society does not involve taking the position of an alienated, passive observer. The socially critical approach to the world in his works is often supplemented by a melancholic and ironical observation. At the same time, the social commentary in Ole’s art are incisive and can be compared to fine needles in the hands of a skillful master of acupuncture, sticking them with precision in the body of society in order to bring it back to health. These pricks are neither painful, nor frightening, yet they have an ability to activate critical thinking of viewers.

Simultaneously the exhibition also reveals another important facet of the artist’s personality: the conscious and systematic use of the creative process for self-reflection and self-observation. It is expressed, for instance, by a whole system of ambivalent images which he has created and calls his alter egos. They seem to share something in common with avatars, the modern bodies in the virtual environment. The theme of self-reflection in Ole’s works deserves to be explored more fully, it is therefore one of the highlights of the exposition. For a more in-depth analysis of this theme we decided to engage the services of the Latvian-born psychoanalyst Jānis Gailis, who is based in Paris. By mutual agreement, Gailis had ten sessions with the artist. His conclusions have been published in the exhibition catalogue.

Kaido Ole (1963) is one of the most vivid and relevant figures of the contemporary art scene of the Baltic States. He studied design and painting at the Estonian Academy of Arts from 1982 to 1992 and has worked at the Academy as a drawing and painting teacher and as a professor in the Painting Department (2003–2010). An active contributor to group exhibitions, the artist has mounted over forty solo exhibitions worldwide since 1989. In 2003, together with Marko Mäetamm, Kaido Ole represented Estonia at the 50th Venice Biennale. The artist resides and works in Tallinn.