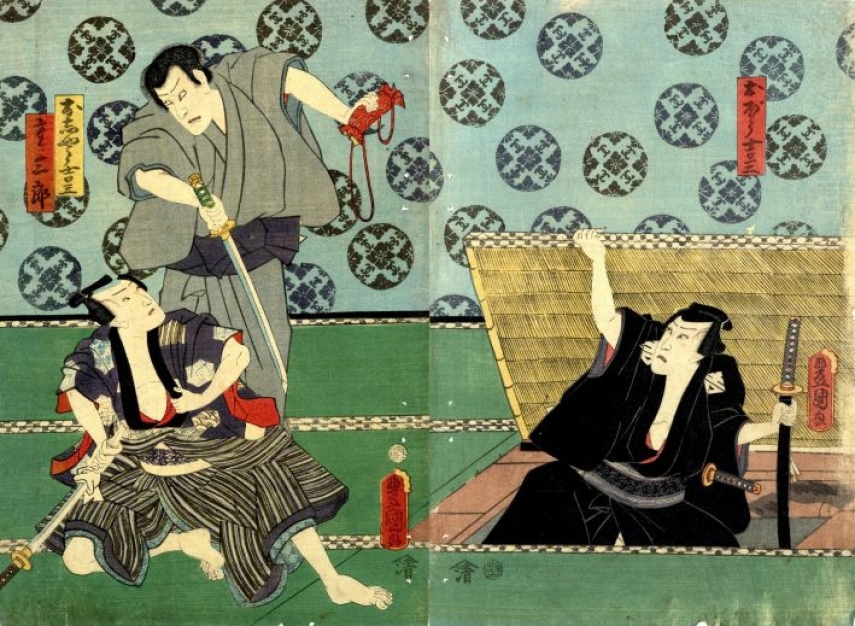 From 29 February to 19 April 2020, the exhibition Kabuki 歌舞伎. The 19th Century Japanese Ukiyo-e will be held at the Art Museum RIGA BOURSE in Riga (Doma laukums 6), featuring the actors of kabuki theatre in coloured woodblock prints or ukiyo-e from Japan’s Edo period. The works are from the collection of the Latvian National Museum of Art.

Sword fights and other tense subjects, ghosts, human-size rats, expressive make-up and gestures emphasizing the emotions of the actors, and colourful costumes are only a small part of the world that can be viewed in the works of this exhibition. It is life as performed by kabuki actors, in Japan’s Edo period (1603–1868).

There are about 380 exhibits in the collection of Japanese graphics at the Latvian National Museum of Art, with the largest number being ukiyo-e – a genre of graphics, which can be literally translated as the “pictures of the floating world”. Ukiyo-e masters mainly portrayed kabuki theatre actors, beautiful women, sumo wrestlers, warriors, scenes from history and folk tales, travelling scenes, landscapes, nature and animals, as well as works of erotic nature. In this way, they revealed the energy-filled popular culture of the Edo period, which flourished in the largest Japanese cities. The works in the museum collection mostly relate to the kabuki theatre theme.

Kabuki is a traditional form of Japanese theatre which was created and matured in the Edo period and combined singing, music, dance, and drama. Along with the noh and bunraku theatres, kabuki is recognized as one of the three main forms of classical Japanese theatre and is included in the UNESCO List of Intangible Cultural Heritage. Kabuki initially developed as a theatre which expressed the interests of the middle class or merchants with the actors presenting their performances on everyday themes, historical events and the resolution of moral ethical issues. The portrayals by the kabuki theatre actors were the most highly demanded among the fans of the ukiyo-e artists and actors.

The works of three productive and commercially successful artists from the 19th century can be seen at the exhibition – Utagawa Kunisada (歌川国貞, 1786–1865), who was also one of the leading trendsetters in his field, Kunisada’s student and active portrayer of kabuki actors, Toyohara Kunichika (豊原国周, 1835–1900) and Utagawa Kuniyoshi (歌川国芳, 1797–1861), one of the last great Japanese ukiyo-e masters.

The visitors of the exhibition have the possibility to discover more about the various elements of kabuki theatre by watching the film 歌舞伎 KABUKI. Japan’s Classical Theatre (1964), this documentary is from the collection of Science Film Museum in Japan.