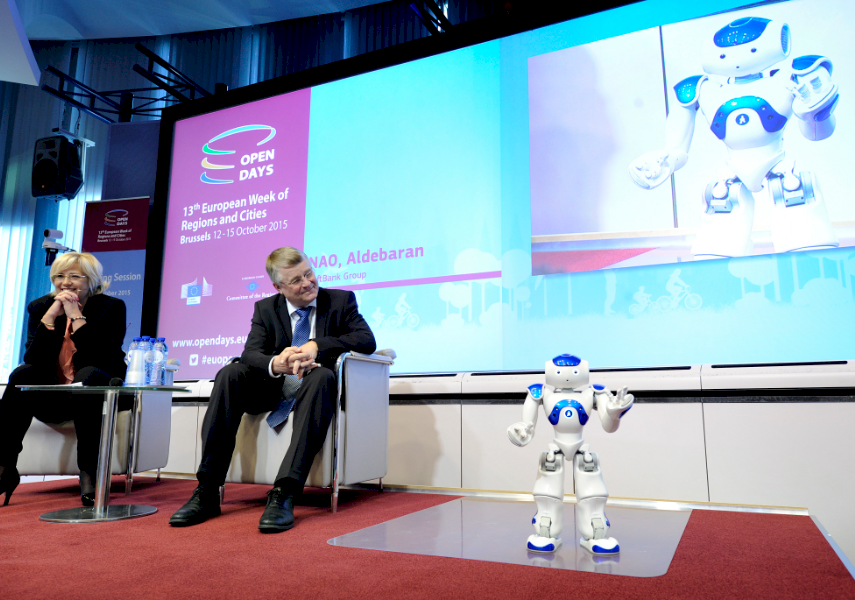 PERSONAL ASSISTANT: NAO, the humanoid, interactive, ‘caring’ robot, a product of the ERDF-funded project Juliette, entertains the audience during the OpenDays opening session.

A walking, talking robot named NAO which took to the stage at the 13th Committee of the Regions’ (CoR) OpenDays2015 event in Brussels in October was offered as just one example of the technological advances emerging from Europe’s universities and industry. European Commissioner for Regional Policy Corina Cretu, speaking at the opening session, went so far as to proclaim robotics as “a priority for European industry,” highlighting the accumulated skills and expertise in the field.

Robotics is seen as one area that offers hope in Europe’s efforts to re-energize a stagnant economy. But this is just one industrial sector, and an emerging one at that. By itself, it won’t be enough to counter Europe’s two main challenges, identified by Vice President of the European Parliament Ramon Luis Valcarcel Siso in his opening remarks as high youth unemployment and the ongoing migrant crisis.

Youth unemployment, now at 5 million, he warns, means Europe will “lose a generation of trained youth.” More worrying for the EU, notes Siso, is that in the process the youth have also lost their “trust of democracy.”
This weeklong gathering, starting on Oct. 12, brought together policy and decision-makers, town council members, administrators, academics, and others representing the CoR from around Europe to network, exchange ideas and experiences, and raise awareness of EU cohesion policy.

CoR is one of the four pillars of EU institutions, and is where much of the success, or failure, in reaching goals is determined. Members represent cities and regions from around the EU, who meet regularly to share ideas to make the EU a better place to live. Set up in 1994, CoR joins the other EU decision-making institutions, the European Parliament, the Council of the EU, and the European Commission. It’s the EU citizens’ voice in Brussels.

Opening the conference, President of the European CoR Markku Markkula reminded the audience of the importance of the week’s agenda: “(The meetings) are crucial in sharing experiences, in collaborating” with others throughout the EU. This is where we are “inventing the future.”

The “powerhouses of development — the bottom-up entrepreneurs — are mostly found in cities and their regions,” says Markkula, adding that smart specialization strategies — a central theme throughout OpenDays —  “will lead to sustainable growth (for Europe) and in creating new jobs.”
European Commissioner for Research, Science and Innovation Carlos Moedas was more specific, defining population centers as the main drivers of growth: “Cities make 70 per cent of the growth and services; it’s the cities and regions, not the states, that are the future.” National borders, then, have little meaning in a world where ideas flow freely, regardless of lines on a map.

Moedas had a message for the city and regional leaders in the audience: “go home and be the drivers of change. Embrace innovation, in the public sector, in areas (such as) energy, technology.”
Balanced growth and development, improved competitiveness across the EU, key themes during OpenDays discussions, need more than just making the right investments and pursuing innovations. There needs to be a vision, and a strategy. Coordination, communication, and planning are essential to ensure success. But even under to best of circumstances, balanced development can be difficult to achieve as cities and population centers, not the countryside, continue to attract the bulk of interest and investment.

It is up to the regions themselves to come up with their own self-help plans and strategies, to leverage the assistance available from EU sources.
“The Juncker plan (a European plan for strategic investment) is a good start, but there is not enough support for smaller projects (or) the smaller population regions. The countryside needs to be kept alive with ways to make it attractive to the young people,” exclaimed Moedas.

Smart specialization as part of EU development strategy is working its way into Cohesion Policy structures.
Politecnico of Milan Professor of Regional Economics Roberta Capello stresses that this is a “bottoms-up policy (where) regions can develop their own strategies,” but she says that it’s “not a pick-the-winner process.” Multiple ideas can work in parallel.
Nonetheless, isolated, or less economically-developed regions face difficulties. These include insufficient technology or access to it; being locked into old, specialized patterns; identifying and setting priorities on outdated information; and more.

Smart specialization strategy is all about development, through using a territory’s capital assets. This requires identifying what are its resources, capabilities, potential markets.
University of Groningen Professor of Economic Geography Philip McCann cites smart specialization as “one of the key critical elements” in a city or region’s development; it’s a process of making priorities from among limited resources. “It’s not a ‘one-off’ but a continuous process of learning, a system of policy frameworks.”

What is smart specialization?

Smart specialization or RIS3 (Research and Innovation strategies for Smart specialization) is a strategic approach to economic development through targeted support for research and innovation. It involves a process of developing a vision, identifying the place-based areas of greatest strategic potential, developing multi-stakeholder governance mechanisms, setting strategic priorities, and using smart policies to maximize the knowledge-based development potential of a region, regardless of whether it is strong or weak, high-tech or low-tech, according to experts Inger Midtkandal and Jens Sorvik. RIS3 will be the basis for European Structural and Investment Fund interventions in R&I as part of the current Regional and Cohesion Policy’s contribution to the Europe 2020 jobs and growth agenda.

The strategy doesn’t need to include expensive, or high-tech, solutions or re-inventing the wheel. “It’s also not always about scientific research, but can be used as an instrument for a region to promote its own strengths,” contributed an audience member during Q&A. “It’s about a region’s development, not about its industrialization.”

Frameworks for developing smart specialization strategies therefore need to be “tailored to each region,” says University College London Professor of Industry and Innovation Studies Slavo Radosevic. Today, there is “too much emphasis on R&D-led innovation.” It’s not this complex — one simply needs to “look to demand-led innovation.”

Capello mentioned one example of how strategy for a region in the Apennines, in Italy, was developed around identifying and qualifying, then getting the full use out of its cultural assets. It was about territorial development through “exploiting the cultural assets.”
This could mean that in Latvia’s Madona region, for example, leaders there identify and prioritize developing it more fully as a summer and winter recreational destination, based on its natural assets — its Baltic-scale mountains (Gaizinkalns), forests, and lakes. With the private sector involved, a strategy could evolve to improve infrastructure to get around: biking and hiking trails through the countryside, Wi-Fi connection, safe roads, and encourage locals and investors to add to and improve existing bed and breakfast establishments and restaurants, targeting German and other foreign tourists seeking an outdoor holiday.

Or take the Liepaja-Palanga region. A strategy could focus on similar but coastal bicycle touring and outdoor enjoyment of nature, for locals and foreigners alike.
Towns or regions could similarly develop green, or anti-global warming, strategies through energy self-sufficiency, conservation, recycling, better regional transport solutions.

Ideas won’t necessarily come from within the community. Capello says that “Outside innovation, where used, needs to be adapted to the local situation.” Someone traveling abroad on vacation or for business may see a product or service that could be introduced back at home. Ideas can be found virtually anywhere.
But McCann says not to expect overnight success. Smart specialization is “a long term policy,” where results won’t be immediately realized. He emphasises: “Well beyond 2020. It’s private sector driven, not public, (requiring the) engagement of SMEs.” What’s important now is for a shift in the culture. “Think what you are trying to achieve.”

The CoR gatherings provide important channels to spread ideas for growth throughout the EU. The use of smart specialization strategies is yet one more tool to support broadly based economic progress. OpenDays2015 attendees took home from this year’s event new ideas, know-how, and possibly new collaboration partners. The nature of development is that it’s a continuous, evolving process. Audience member Michael Schneider may have summed the week up best, saying: “The OpenDays idea needs to be an everyday structural part of European life.”