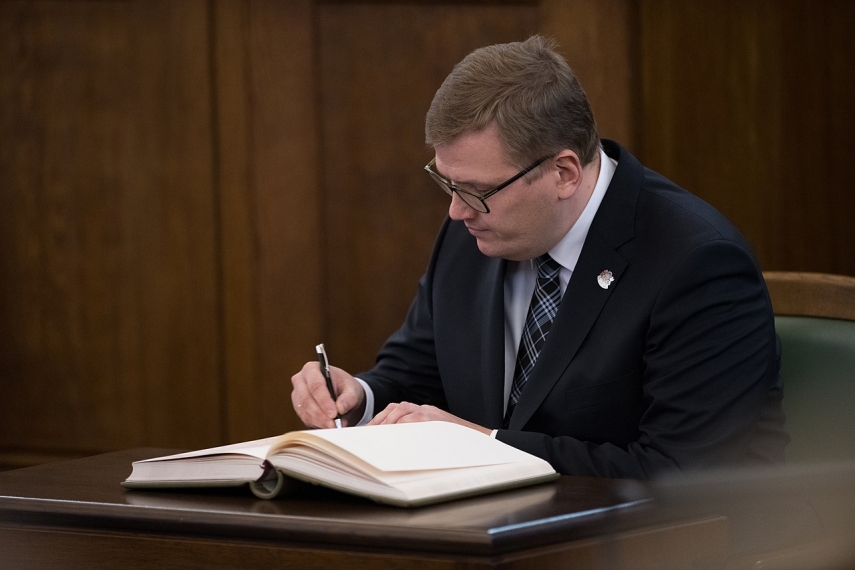 RIGA - In an interview with the LNT television channel today, Environmental Protection and Regional Development Minister Juris Puce (For Development/For) said that as the holder of Riga Satiksme's (RS) shares, it was the responsibility of Riga Mayor Nils Usakovs (Harmony) to oversee the municipal public transportation company's largest procurements, but it is not known whether Usakovs did this.

Puce explained that according to law, when Usakovs decided not to form a council for RS, the company's statutes then foresee Usakovs himself becoming the company's supervisor. ''Now the ministry must look into whether or not Usakovs even carried out these tasks. The available protocols show that he has not, which is a direct violation,'' the minister emphasized, adding that the ministry is now awaiting Usakovs' explanation.

Puce said that it looks like Usakovs relied completely on the decisions made by the company's board and did not verify them, which obviously led to the corruption scandal at RS.

The minister pointed out that RS is a company with a large loan portfolio, and it has borrowed considerable sums from such international financial institutions as the European Bank for Reconstruction and Development and the European Investments Bank. ''Usually, these banks include in their loan agreements certain terms which foresee that if these funds are involved in corruptive activities, then the banks are able to immediately request these sums to be repaid. And in this case we are talking about hundreds of millions of euro which the banks could ask to be returned,'' Puce explained.

Asked whether there is such a risk, Puce said that according to publicly available information the current head of RS is in active communication with creditors to avoid such a scenario. ''Otherwise, we would ourselves have to find these hundreds of millions,'' Puce emphasized.

As reported, the Environmental Protection and Regional Development Ministry is asking Riga Mayor Nils Usakovs (Harmony), the person in charge of Riga municipal public transport company Rigas Satiksme's share capital, to inform the ministry about how the company is being managed, the ministry told LETA.

The ministry wants Usakovs to report on how he manages Rigas Satiksme's operations and what internal control mechanisms have been introduced at the company. Usakovs has to explain why Rigas Satiksme's articles of organization are not in line with the regulations, report on the company's financial situation, properties used as securities to take out loans - and what financial risks they carry should the company be unable to meet its debt obligations, procurement control procedures at the company, and measures against corruption.

"During the initial inspection, the ministry established problems in supervision of Rigas Satiksme's operations, which is why we have asked for additional information on the company's management and financial situation. We expect Rigas Satiksme to reply our questions in two weeks," said Puce.

Rigas Satiksme, a municipal company, is responsible to the Riga City Council, which is therefore in charge of the company's operations, reminds the Environmental Protection and Regional Development Ministry.

Teterovskis’ wife Elina Kokina, who used to be a board member of the now defunct Tram Servis Riga company, which was headed by Kozak, was released on her own recognizance.

Last week, the Corruption Prevention Bureau searched Usakovs' office and home. The searches were carried out in connection with the Rigas Satiksme scandal, according to information obtained by LETA. Usakovs told journalists after the searches at his office and home that he has committed no criminal offenses and would therefore not resign as Riga mayor.