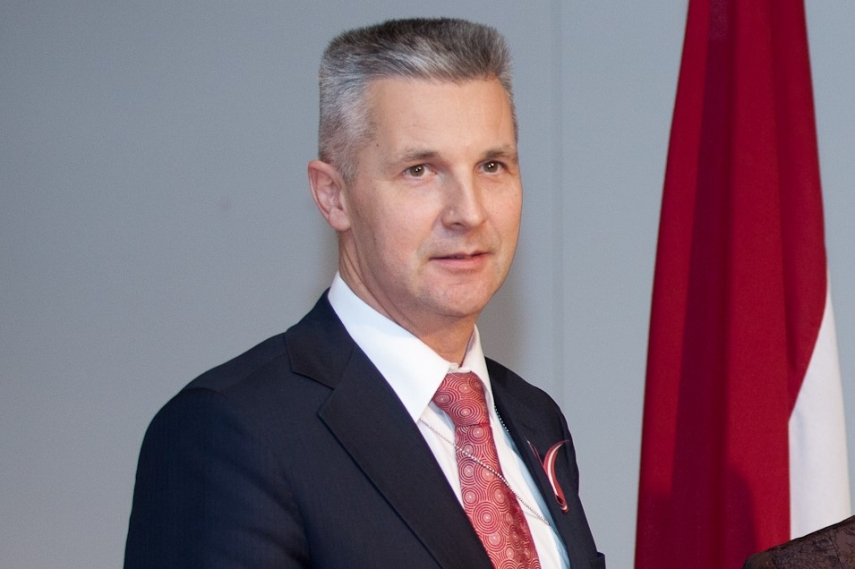 RIGA - Introducing a comprehensive national defense system is going to be one of the biggest challenges for the next coming years, Defense Minister Artis Pabriks said in an interview to Latvian Television this morning.

As the Latvian military continues to improve its fighting capacity and technical equipment, it is also essential to boost the population’s resilience to anti-Latvian propaganda, the minister said. Pabriks voiced concerns that such propaganda can be spread even by public officials. Last Saturday, for instance, Daugavpils Mayor Andrejs Elksnins (Harmony) tried to discredit the Latvian armed forces in his speech he made at a rally in support of Riga Mayor Nils Usakovs.

The minister called on Latvia’s residents to take a critical approach to information lest they become victims of propaganda. “Introducing the concept of comprehensive defense will therefore be one of my priorities for this and following years,” Pabriks said, adding that a similar system is already in place in a number of other countries, including Israel, Finland and Taiwan.

Pabriks explained that, roughly speaking, comprehensive defense means that people, starting from nursery school to retirement, know how to respond to various emergencies. The minister said that phasing in the system would require a serious managerial effort as it concerns virtually every area, and consequently, all ministries. “We need to figure out what other ministries have to do, how we can cooperate, so this will be a major challenge,” the defense minister said.

As reported, at the beginning of January the government ordered all ministries to carry out an analysis by September 1, 2019 to identify possible problems and necessary measures related to the planned development of a comprehensive national defense system.

The government heard the Defense Ministry’s report on the development of the comprehensive national defense system. In the report the ministry says that threats to Latvia's security have reached such a level of complexity that they cannot be dealt with by military means alone, which do not cover all dimensions of hybrid threats. National defense of Latvia has to be comprehensive and based in the readiness of all public institutions and the nation to overcome a crisis, it has to be resilient to external influence and able to resist and regenerate after a crisis. To that effect, there has to be mutual trust and partnership between the general public and state institutions.

According to the Defense Ministry, a comprehensive national defense system means all Latvian residents' commitment to their country and readiness to defend it. The development of comprehensive national defense will be decentralized, as state institutions will cooperate with each other to reach the necessary decisions, and the entire process will be supervised by the Defense Ministry.

The report says that Latvia's military defense is based on the psychological readiness to resist occupation, which requires that the weakest links in the defense system be timely strengthened and secured. The entire nation will be involved, and every resident will know his or her place and role in the resistance movement.

According to the Defense Ministry, the development of the comprehensive national defense system will be planned in the short, medium and long term. In the short term, from 2019 to 2021, the focus will be on the development of Latvia's military capabilities, the Armed Forces and the Home Guard, as well as on measures fostering cooperation between the private and public sector for national defense purposes, and on educating society.

In the medium and long term, a decision-making mechanism will be developed on the national and municipal levels to coordinate comprehensive national defense, and a partnership institute will be created where representatives from government institutions, Armed Forces and private sector will cooperate for better planning and implementation of national defense measures.