How did a Political Prisoner Turn into a Politician? 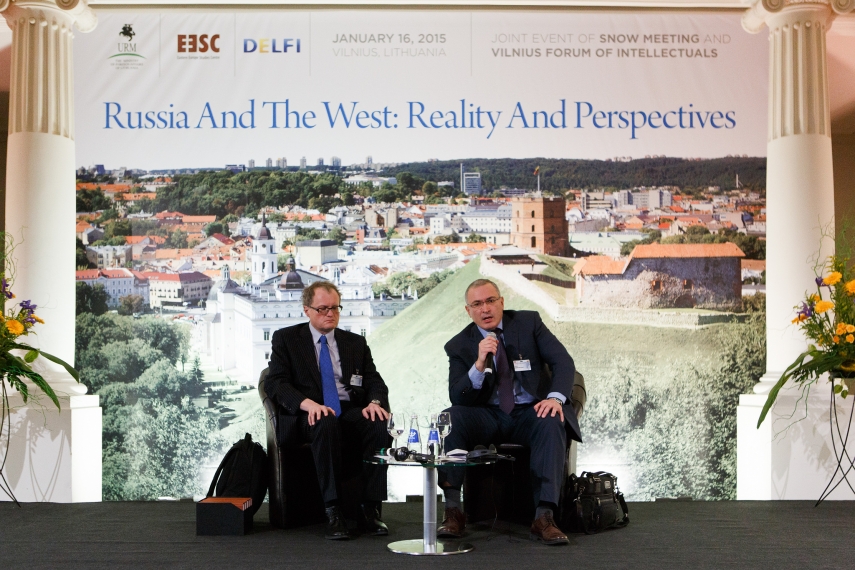 Mikhail Khodorkovsky hardly needs an introduction. No aspect of his biography and activity would exhaust his personality. A tycoon in Russia at the time when it was still regarded if not as a friend, then at least as a reliable partner, a person of difficult choices, and a living promise of yet another Russia, Mikhail Khodorkovsky has become an emblematic figure in present Russia when he was accused of tax evasion (a standard case in an authoritarian state practicing political persecution and selective justice both masquerading as the struggle against corruption) and confined to prison for ten years.

I got closer to his story during my mandate as an MEP in Brussels (2009-2014). Imprisoned by Vladimir Putin, Mikhail Khodorkovsky has immediately changed his life strategy raising his voice and speaking out in favor of human rights and civil liberties. Long perceived as a would-be George Soros of Russia (Khodorkovsky has never hidden his admiration for Soros), Khodorkovsky began increasingly acting and sounding as a human rights activist closing ranks with prominent democrats and, such as Sergei Kovalev and Lyudmila Alekseyeva – both of them have passionately defended Khodorkovsky. Convinced by his loyal son Pavel and the Russian political opposition, I did my best to help the Khodorkovsky cause get more support and publicity in the European Parliament. And I did not regret a minute to have done it.

The release of Khodorkovsky from jail was nothing short of a miracle. Many were inclined to think that it was Vladimir Putin’s beau geste before the Sochi Olympics; others were convinced, and not without reason, that the veteran of German diplomacy Hans-Dietrich Genscher and the remnants of old good Neue Ostopolitik were behind the miracle (especially keeping in mind that Genscher was the one who greeted Khodorkovsky in freedom, that is, in Germany). Having met with him a couple of times, first in Strasbourg and then in Vilnius, I realized how complex and difficult his situation was.
Max Weber once made a famous distinction between the ethics of a saint and the ethics of a politician.

Needless to say, in their moral choices, human rights activists and dissenters stand much closer to a saint than to a politician whose choices and actions are always informed and motivated by various kinds of calculations, concessions, and compromises. As Niccolo Machiavelli would have it, Lady Fortune tends to turn her back to those who seek in politics only otherworldly and saintly things or poetic justice; instead, she sides with those whose wisdom lies in courageous and rational actions. What he called efficacious truth (verita effettuale) is nothing other than successful practice, which is obliged to create a normative dimension in politics and become a recognized form of wisdom. Hence, governare e far credere (to rule means to make believe).

This is especially obvious in modern Russia with its nearly Manichean divide between power and moral imagination, or politics and morality. Andrei Sakharov was rather sceptical about the happy marriage of Realpolitik and human rights defence. Some of his successors and brethren-in-arms, such as Sergei Kovalev, has been even more so insisting on the incompatibility of the two – according to him, either you defend the truth calling a spade a spade or you are in the realm of half-truth, that is, Realpolitik. This means that Russian human rights activists, including the Memorial people, can no longer put Mikhail Khodorkovsky into the same category where he, while still in jail, was along with the feminist and anti-Putinist punk rock protest group Pussy Riot (Nadezhda Tolokonnikova and Maria Alyokhina) and the late Sergei Magnitsky.

During the Vilnius Forum of Intellectuals and the Snow Meeting held on 15-16 January 2015, two major events in Lithuania’s foreign policy and public diplomacy, Mikhail Khodorkovsky gave a keynote address focusing on the economic sanctions imposed by the EU and the USA on Russia. His idea that the sanctions make the Russian people suffer instead of dealing directly with Putin’s clique and its kleptocracy made several dissenting Russian political analysts and commentators uneasy and also left quite a few Lithuanian journalists puzzled about a possible paradigm shift in Khodorkovsky’s program of thought and action. He did not sound apologetic vis-a-vis Putin and his regime; he rather questioned an EU and USA policy towards the Kremlin.

Andrei Illarionov, a former economic adviser to Putin, did not hide his disenchantment with Khodorkovsky’s position peppering him inconvenient questions, such as the reason to use the term “Crisis in Ukraine,” instead of saying plainly that it is an overt war and aggression of Russia against Ukraine. The questions proliferated in an explosive manner leading the discussion to the issue as to whether Khodorkovsky (like Alexei Navalny) would oppose the return of Crimea to Ukraine, and the like. The trouble is that Khodorkovsky, echoing Navalny, in fact, put this into question, thus sending a mixed message to the West. Khodorkovsky’s answers were as clear as the sun in the blue sky – in terms of their content, rather than form. He insisted on a serious mandate which could only be given by the electorate in the all-people vote for President of Russia, yet he would only see himself as a transition figure acting as a provisional leader – obviously short of legitimacy to act in such a decisive fashion. Whatever the case, it was clear for me from the very beginning of his talk, that his was a message to Russia, rather than to Lithuania, Latvia, Germany, or the EU at large.

Without a further ado, let us face the fact: Mikhail Khodorkovsky is a former political prisoner turned into politician. From now on, we will have to judge him as one, instead of re-enacting the past

The writer is a Professor and Vice-President for Research at ISM University of Management and Economics, and serves as Honorary Consul of Finland in Kaunas.