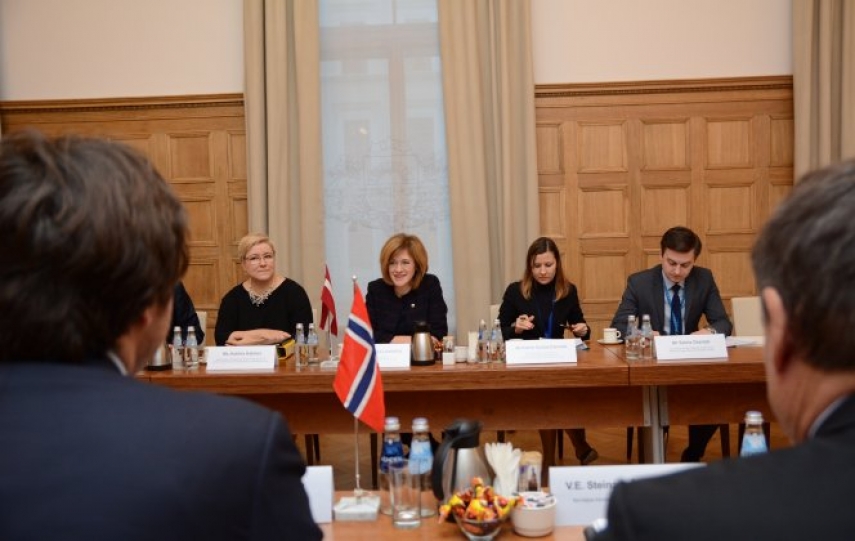 RIGA - On 15 December, Zanda Kalniņa-Lukaševica, the Foreign Ministry’s Parliamentary Secretary, met with Jens Frølich Holte, State Secretary for the European Union and the European Economic Area (EEA) affairs at the Norwegian Foreign Ministry. Their meeting addressed topics related to the implementation process of new financial instruments, the EU and the EEA agenda, and bilateral cooperation.

The Parliamentary Secretary welcomed the signing of memorandum of understanding on the European Economic Area (EEA) and Norwegian Financial Mechanisms, and she highlighted the positive results achieved during the previous programming period. Jens Frølich Holte gave an especially positive evaluation of Norway’s contribution to the development of the justice system infrastructure in Latvia, which will also continue under the new financial mechanisms.

Reviewing issues on the EU and EEA agenda, the State Secretary stressed that Norway has been closely following the Brexit process, and it is essential that the country maintain strong ties with the United Kingdom. Zanda Kalniņa-Lukaševica noted that in the context of Europe’s future it is vital for the current transition process to be carefully considered and well managed.

The Parliamentary Secretary stressed that a closer EU cooperation in security and defence will also bring a valuable contribution to the EU-NATO cooperation. She noted in particular the initiative on facilitating the mobility of troops and equipment in Europe, which is also relevant to the movement of NATO forces across the EU. Jens Frølich Holte recognised that it important for the EU’s initiatives in security and defence to complement NATO activities, and he expressed Norway’s interest in getting involved in the Permanent Structured Cooperation (PESCO) and the European Defence Fund initiatives in the future.

During the conversation, the issue was also discussed of possibilities for Latvian fishing vessels to engage in harvesting snow crab in the fisheries zone around the Svalbard archipelago. The Parliamentary Secretary and the State Secretary for EU and EEA affairs expressed hope that the issue will be resolved through an agreement between all parties involved and a mutually acceptable solution.