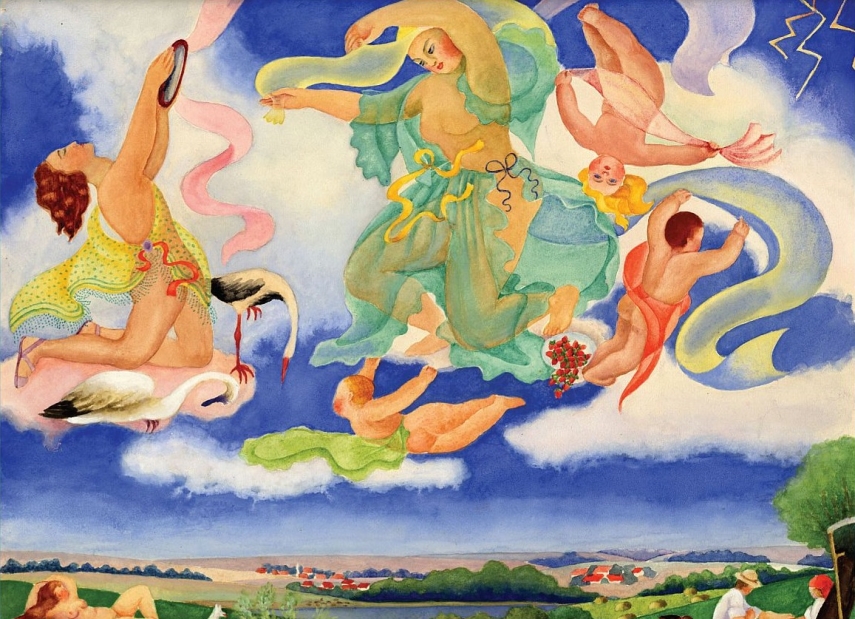 An exhibition of paintings and drawings by well-known Latvian artist Hilda Vīka (1897–1963) will be presented in the 4th floor Exhibition Halls of the main building of the Latvian National Museum of Art in Riga (Jaņa Rozentāla laukums 1) from 15 June to 25 August 2019.

Hilda Vīka’s peculiarly charming oeuvre was a bright light in the Latvian art scene of the 1920s–30s, in naive sincerity fusing sense and sensibility, natural and imagined subjects and images.

In 1927, in the art salon of the Daile Theatre, Hilda Vīka held her first solo exhibition, presenting drawings. These were characterised by exotic subjects, which were fashionable at the time, an unusually rich and varied ornamental finish and stylised details (Girls with a Dog; Salutation, both 1927). A considerable role in the structure and content of the black and white compositions also was played by the erotically relaxed female nudes, showing an influence of Art Deco (The Morning Hour, 1927).

In the watercolours of the 1930s, Hilda Vīka concentrated on detailed presentation of her subject matter, occasionally engaging in good-natured irony about suggestive or amusing episodes of everyday life (The Flower Waterers; In the Family Garden; Sunday Walk, all early 1930s; Lazy Wives, 1930). In the late 1930s, a string of images and subjects from Latvian folklore appeared in Hilda Vīka’s oeuvre (Māra in the Cowshed; Forest Mother and Wind Mother, 1930s), corresponding to the ideas of the Dievturība neo-pagan religious movement as well as the artist’s own romantic worldview.

At the end of the 1920s, Hilda Vīka took up oil painting, her works depicting Ķīpsala – a place she knew since childhood. Vīka’s landscape paintings display characteristics of the New Objectivity – a modern art movement of the time (The Zunds Canal, ca. 1927; View Towards Dzegužkalns, 1929).

Alongside “pure” landscapes, which dominated in Vīka’s oeuvre of the early 1930s, in the late 1930s these compositions gradually began to include depictions of people and their daily life, while the landscape gained a new life in the portraits. The artist’s self-portraits and paintings of nudes show considerable originality. More or less consciously, she endowed virtually every female image with aspects of her own appearance or character.

During the Soviet period, having witnessed the imprisonment and death of her spouse and further repressions, Hilda Vīka was forced to master the principles of the socialist realist method proclaimed by the regime, thus retaining her status as an artist. In 1945, painter joined the Artists’ Union of the Latvian SSR (AUL), from which she was expelled in 1950 “for remnants of formalism in her oeuvre”. Readmitted to the AUL in 1957, Hilda Vīka actively participated in exhibitions till the end of her life.

The exposition consists of works from the collections of the Latvian National Museum of Art (LNMA), Dobele Museum of Regional Studies (DMRS), Zuzāns Collection, Dr. Guntis Belēvičs and other private art collections.