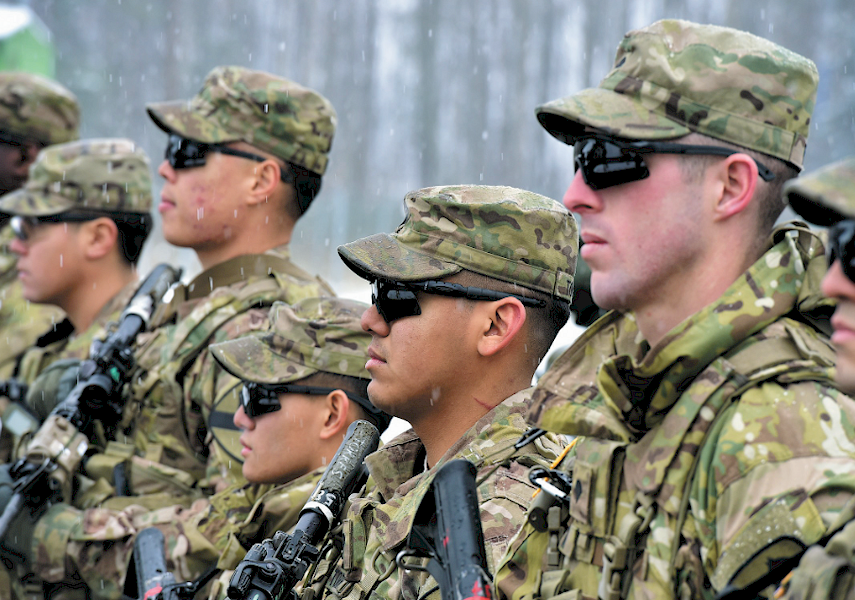 ROCK-SOLID DEFENSE: The U.S. troops, which, since the start of the Russian military actions in Ukraine, were deployed for a ‘long-term exercise’ in the Baltics, greeted Dalia Grybauskaite and Jens Stoltenberg in Karmelava. 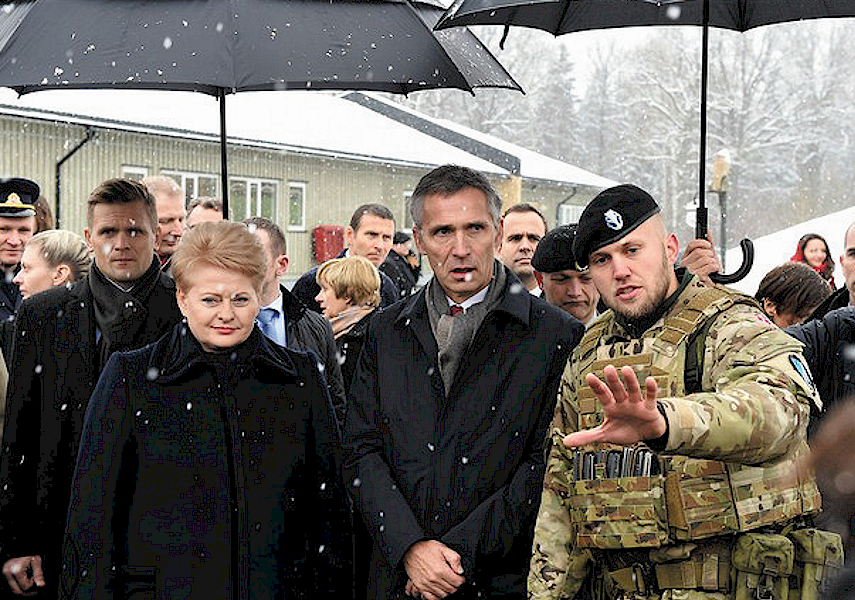 During the one-day visit of new NATO Secretary General Jens Stoltenberg to Lithuania on Nov. 21, Lithuanian President Dalia Grybauskaite described Russia as a terrorist state due to Russian aggression in Ukraine. On the eve of the visit, on Nov. 20, she used the same description of Russia during her interview to Lithuanian national radio LRT. The official response from Moscow was angry and Russia has now imposed unofficial blockages on Lithuanian cars and trucks crossing into the Russian territory.

“There are Russian troops in eastern Ukraine now. However, the state [of Russia] completely denies it,” Grybauskaite said at the joint press conference standing near Stoltenberg in the Airspace Control Center in the town of Karmelava. “That state moves in heavy artillery and vehicles, which are unmarked with state symbols. That state orders its troops to take off its insignia and to act without insignia there. Such a state has all the characteristics of a terrorist state.”

Earlier on the same day, she visited international conference titled “The Civil Defense in a Hybrid War,” which was organized by the  7,000 members-strong Lithuanian Riflemen’s Union, which has been rapidly growing (the government-sponsored paramilitary organization, which was first set up in 1919, banned in 1940 after the Soviet invasion, re-established during the Lithuania’s drive to independence in 1989) at the Best Western Hotel in Vilnius. “This kind of war can be chosen only by those who are afraid to openly raise their flag in a battlefield,” Grybauskaite said about the Russian troops’ activities in Ukraine during her opening speech at the conference.

“Ukraine fights for peace in the whole of Europe. If a terrorist state will not be stopped, its aggression can spread further,” she stated in her speech in the Best Western Hotel. These two sentences were almost an exact repetition of her own words in her interview to the Lithuanian national radio, LRT, on Nov. 20.

Russia’s response
Russia’s official reaction was swift and severe. “Grybauskaite’s remarks surpassed even the most extremist statements coming from radical nationalists in Kiev. What she said does not help, but, to the contrary, only complicates the search for solutions to the Ukrainian crisis,” reads the statement by Alexander Lukashevich, spokesman of the Russian Foreign Ministry, which was published on Nov. 20 on the official Internet site of the Russian Foreign Ministry.

“Sensible politicians in most countries, who are not trying to please those on the fringe of society, but are genuinely concerned about the situation in Ukraine and the state of affairs in Europe and the world, operate based on a different – responsible – approach,” Lukashevich continued. “The Lithuanian president would better pull in her Komsomol [a Russian-language syllabic abbreviation for the Soviet-era Young Communist League] horns and try to get rid of her inferiority complex caused by her Soviet past [she was a member of the Soviet-era Communist Party], which, clearly, makes her be holier than the Pope.”

Grybauskaite’s remarks about Russia as a terrorist state also evoked stern responses from Nikolay Kolomeytsev, deputy head of the faction of the Communist Party. Speaking in the Russian parliament on Nov. 21, Kolomeytsev said:  “I want to charge the International Relations Committee [of the Russian parliament] with the task to prepare a statement and maybe even an order to introduce new economic sanctions against Lithuania, or maybe even a motion to stop diplomatic relations. It is unacceptable that a president of a nation utters such rude and cynical words.” Sergey Naryshkin, the Russian parliament chairman, asked the Communist faction to officially submit the motion.

But for the time being, the Lithuanian foreign ministry appears unfazed. “We have no plans to stop diplomatic relations,” Lithuanian Foreign Minister Linas Linkevicius said when he arrived to greet Stoltenberg in Karmelava on Nov. 21 adding that he will not comment a statement from a parliamentary faction in a parliament of a foreign state.

Meanwhile Grybauskaite’s statements have also provoked angry articles in the Russian media, and angry anti-Lithuanian messages were posted in the comments sections of several articles.
However, questions have been raised about the integrity of these comments. Aivar Jaeski, a colonel in the Estonian armed forces and deputy director of the Riga-based NATO Strategic Communications Center of Excellence, said at the conference “Civil Defense in a Hybrid War” that the Russian secret services commission cohorts of writers to write internet comments in Russia and abroad in the service of the Kremlin’s anti-Western propaganda war. Jaeski also backed up Grybauskaite’s statements: “The voice of our small countries is often not well-heard,” he said. “It is why stronger language is needed.”

Stoltenberg reinforces NATO commitments
Stoltenberg, speaking at his and Grybauskaite’s joint press conference in Karmelava, stated that “NATO’s commitment to defend and protect all allies is rock-solid” and expressed NATO’s concern over the Russian military activities in eastern Ukraine and on the Ukrainian-Russian border when he was asked about possible intentions of Russia to create a land bridge to the Russia-annexed Crimea via the Ukraine’s territory.

“I cannot go into details when it comes to the exact numbers. But what I can say is that we have seen a military buildup. We have seen a movement of forces, of equipment, of tanks, of artillery and advanced air defense systems into Ukraine. And we are also seeing movement of forces towards the line which was supposed to be the line that the ceasefire was going to be based on. So, we have seen movements of forces also westwards within eastern Ukraine. And this is very serious because it’s totally undermining the Minsk agreements and it’s fuelling the conflict. And it’s contributing to new violations of the ceasefire. And that’s the reason why we call on Russia to pull back its troops, to both withdraw troops from inside eastern Ukraine; but in addition to withdraw troops from the border; because that would be an important contribution to the de-escalation of the situation,” Stoltenberg said.

He added that he expects “a political solution, which is based on the Minsk agreements and on a ceasefire.” According to Vykintas Pugaciauskas, commentator on international affairs with the LRT, Stoltenberg was known as a quite Moscow-friendly Norwegian leftist whose election to the post of NATO secretary general (on Oct. 1) was rather positively evaluated by the Kremlin and his statements, which, in fact, urges Kiev to negotiate with the persons described by Kiev as “terrorists,” are not so tough towards Russia as statements of Anders Fogh Rasmussen, the previous NATO secretary general.

During the press conference of Stoltenberg and Grybauskaite in Karmelava, a Norwegian journalist asked Grybauskaite for a comment on the recent statement by Dmitry Peskov, chief spokesperson of Russian President Vladimir Putin: Peskov told BBC that Russia would like to receive “a 100 percent guarantee” that Ukraine will not join NATO.

“Lithuania declares that any sovereign nation makes decisions itself and on its own where and how to participate in the international organizations.  No country, any, has a right to dictate to sovereign countries on their decision making,” Grybauskaite said.

Stoltenberg greeted Lithuania’s decision to raise its defense expenditure. Earlier this year, all the main Lithuanian political parties have agreed to gradually double the defense spending, which is planned to reach the target of 2 percent of the country’s GDP by 2020.

Grybauskaite said in Karmelava that the decisions of the NATO summit in Wales of Sept. 4-5 are sufficient for the defense of Lithuania – it is important to implement those decisions.

Grybauskaite also stated that it is quite symbolic that one of the first visits of new NATO secretary general was made in the Baltics. Stoltenberg came to Lithuania after visiting Estonia and Latvia on Nov. 20. The Soviet era-built Airspace Control Center in the Lithuanian town of Karmelava controls the airspace over the three Baltic countries and reacts to violations of Lithuanian, Latvian and Estonian airspace.

In 2014, the number of such violations by Russian military airplanes increased dramatically. Russian airplanes are intercepted by NATO allies’ fighter planes, which are located in the Zokniai Airbase in Lithuania, the Amari Airbase in Estonia and airbases in other NATO countries.

During the conference “The Civil Defense in a Hybrid War,” Valentyn Badrak, Ukrainian military analyst, stated that Russia can stage its next hybrid war in the Baltics and Kazakhstan due to large Russian-speaking populations living there. Edward Lucas, a senior editor of The Economist, speaking at the conference, urged the Baltics not to panic. “Russia is not a strong country,” Lucas said adding that the Russian economy is equal to the economy of Italy.

Lucas stated that the West is losing the propaganda war and the real war (in case of Ukraine) with Russia due to insufficient will in the West to stop Russia, not due to a lack of economic and military power in the West. Lucas urged the West to take tougher steps regarding Russia, such as the freezing of Kremlin-related assets in Western banks.

Unofficial sanctions imposed, Lithuania agrees to send military support to Ukraine
Next week, on Nov. 24, Grybauskaite (who was accompanied by Lithuanian ministers of foreign affairs, defense and energy) visited Ukrainian President Petro Poroshenko in Kiev. Lithuania has agreed to supply weapons to the Ukrainian armed forces, Poroshenko said at a joint press conference with Grybauskaite.
Grybauskaite did not specify which kind of weapons would be supplied by Lithuania to Ukraine, stating broadly that “Ukraine will receive all the support available to Lithuania.”

When she was asked during the press conference to specify what kind of weapons would be supplied by Lithuania to Ukraine. Grybauskaite did not use the words “non-lethal military supplies,” which is used by the U.S. administration when its representatives talk about the U.S. military aid to Ukraine.

On Nov. 26, Lithuanian Prime Minister Algirdas Butkevicius said that his government will ask the European Commission to put pressure on Moscow to stop these Russia’s unofficial sanctions against Lithuania.